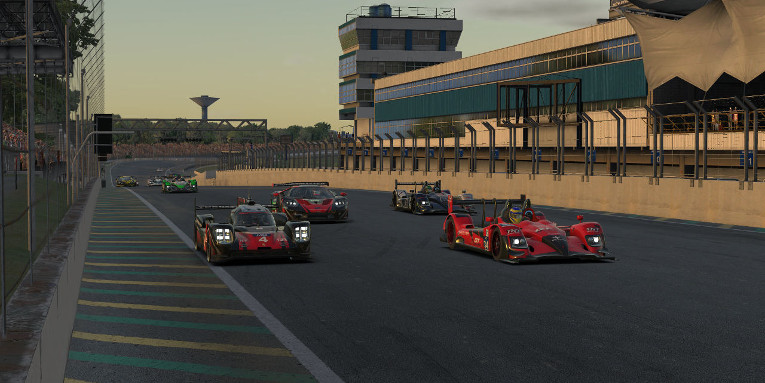 There were a number of incidents but not many penalties for contact at Interlagos. Did your team have any troubles with traffic?

Nick Rowland, Wyvern Racing #25: We were probably the main (or only) team that was hit with multiple penalties. Both we felt were very harsh and unjust. This was emphasized when others didn’t get penalized for what looked worse.

Marcus Hamilton, Thrustmaster Mivano Racing #3: We had no issues whatsoever. We just flew around all the traffic.

Philip Eckert, RacingCenter-Vib3sports #41: Traffic on this track was not easy at all. There were not many spots for a P2 to get by a GT on race pace. Sometimes you had no choice but to wait for half a lap for the next straight line. Finding your driving rhythm in such an environment is pretty hard.

Karl Modig, SRN Motorsports #74: We were hit two times by P2 cars in the tight infield of the circuit. Maybe they could have been avoided with a bit more patience from those drivers, but it’s a tough section to overtake slower cars in so I can understand them making some mistakes. Overall, I think that most teams were expecting chaos to erupt once the different classes started interacting. In the end, however, it wasn’t too bad compared to the earlier races this season.

Track temperatures at Interlagos ranged from above 50°C at the start to the 20s at the finish. How did this range of conditions affect the car’s driving or your team’s strategy?

Marcus Hamilton, Thrustmaster Mivano Racing #3: It was pretty cool to have such dynamic conditions over the course of the race. However, pace aside, it didn’t really impact our car setup or strategy too much. It allowed us to double stint the tyres at the end of the race but that would always have been our plan A anyway.

Karl Modig, SRN Motorsports #74: Having driven both the first and last stint of my team’s race, I can assure you that the differences had a huge impact! You had to both drive more carefully at the start and also set up the car to handle well in difficult conditions, even if it meant that we couldn’t maximize the grip later on.

Nick Rowland, Wyvern Racing #25: It was a challenge but fantastic at the same time to experience the different conditions. Adapting was a great challenge but one that we all enjoyed.

Philip Eckert, RacingCenter-Vib3sports #41: We opted for more downforce on our setup, which really helped in the first half of the race with the high temperatures. The range of temperatures was a really interesting experience as you had to constantly adopt your driving style and braking points during the race.

As we close out this year and the first half of the season, what is your team’s New Year’s resolution for 2019?

Nick Rowland, Wyvern Racing #25: Try not get a bloody penalty.

Philip Eckert, RacingCenter-Vib3sports #41: Try to stay in top 10 during the upcoming races.

Karl Modig, SRN Motorsports #74: Our drivers know how to survive in traffic, and we usually get good results by benefitting from the misfortune of others. However, raw pace is still important in endurance racing, and we’re lacking something in that department. Just focusing on going quicker might make it a lot easier for us to climb up the field next year.

Marcus Hamilton, Thrustmaster Mivano Racing #3: We’ve been fortunate that our preparation and pace has paid off nicely so far with 3 wins out of 3 races. There are still areas we can feel we can improve on, so that’ll be our focus, as well as making sure we continue to stay out of trouble.

Out of the three remaining races — Suzuka, Spa, and Le Mans — which one are you looking forward to the most, and why?

Karl Modig, SRN Motorsports #74: Suzuka actually. While Spa and Le Mans are great tracks too, Suzuka is a personal favorite. Suzuka will also present a new challenge for the series, as it is a new track on the calendar. Also, it doesn’t host a lot of multiclass events in general.

Marcus Hamilton, Thrustmaster Mivano Racing #3: Le Mans without a doubt — aside from already being my favorite track, the fact it will now transition correctly between day-night-day is going to make it such an awesome experience. I just pray for a clean race!

Philip Eckert, RacingCenter-Vib3sports #41: All three of them. Steven (Freiburghaus) is looking forward to Suzuka, Louis (Klinkhammer) for Spa, and myself for Le Mans. These three tracks are really fun in a P2 car.

Nick Rowland, Wyvern Racing #25: All of them. Three of the greatest race tracks in the world. What’s not to love?!