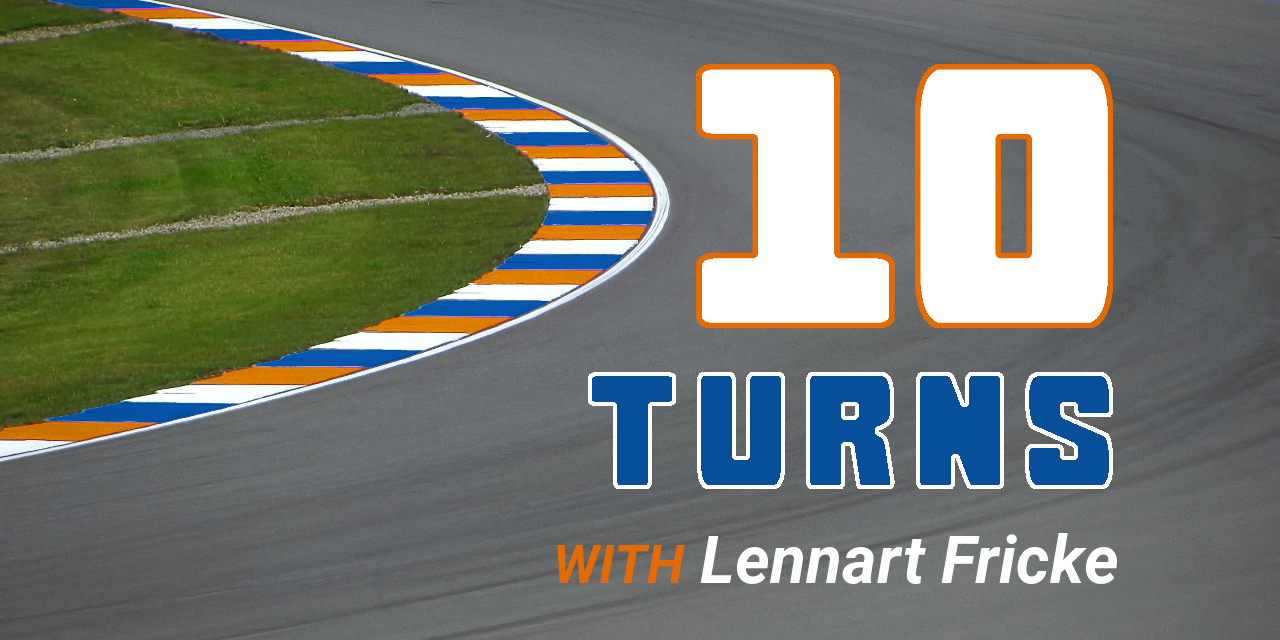 Welcome back to another edition of 10 Turns. Today I’m talking with Lennart Fricke, who is from Germany and drives for Schubert Motorsports. In the most recent NEO round at Interlagos, Lennart and his brother Moritz won the P2 class.

Corey Davis: So Lennart, before we get started with the 10 questions, I have to ask: how did it feel for you and your brother to get that big victory?

Lennart Fricke: First of all, it’s really nice to be here. Thanks for the invitation. And yeah, it was really unexpected for us. We didn’t do that much practice and we were caught by surprise as well. It’s pretty awesome.

Corey: That was a very impressive win, so again congratulations to you guys, and if you’re ready, we’ll get started with the 10 Turns.

Lennart: Yeah, thanks a lot, and let’s get started.

That goes back to Need for Speed: Shift 2. I got a really cheap wheel with pedals that only could do full brake or full throttle. It had no force feedback. But actually, I learned the Nordschleife on Shift 2, and that’s where it all started. After that, I bought Assetto Corsa and last year I joined iRacing as well.

That’s very impressive also to see that you’ve only been on iRacing for about a year or so. So what made you make the move to iRacing?

I have to say that it was my brother. My brother tried iRacing one month before me, and he was driving really a lot. And so, I just thought maybe I should just try it. I always wanted to do iRacing but I never really got started, and then I just bought three months and the Ford, and since then, I cannot get enough. It’s really good.

2. What is a fact about yourself that your teammates, and maybe even your brother, would be surprised to learn?

That’s really difficult since my brother is my teammate. Maybe it’s when we talk about — not my brother — that I don’t have a rig and I’m driving on a normal desk. I cut a big hole in the desk to fit my wheel base in there. It looks pretty good. It’s not that it’s breaking when I’m driving, but I think not everybody knows that.

Hey, whatever works. I’ve seen rigs that are far less nice than that that get the job done.

Yeah, maybe someday I get a rig, but until now, it does the job pretty good.

I think that one really depends on the car that I’m driving. When I drive the HPD, I really try to keep it simple and try to keep my steering angle all the time in the corners and do a lot with the throttle. But in GT cars, I tend to drive a lot more aggressively. They have ABS and a lot better traction control and I personally think a more aggressive driving style benefits there a little more.

There are quite a lot because I tend to watch a lot of races. I would say it’s probably 2012 where Sebastian Vettel won the world championship in Brazil because that was a really good race. Getting turned around and not giving up and keeping the fight on, that was really good.

Since you’re from Germany, I assume you’re a Vettel fan, but were you also a Michael Schumacher fan before him?

I’m a little too young to really — so I never watched Formula 1 back in the good days of Michael Schumacher. But you have to kind of be a fan if you’re German, I think.

That’s a good question and I really don’t know. I would say that I think the constellations we have already are pretty good. What I’m missing is a really good VLN. I think the official VLN doesn’t fit to the real VLN. We have the very slow Mazda, and then the GT3 cars. In the real VLN, you have more diversity and the differences between the speeds are not that high. So that’s what I’m really missing in iRacing.

So if you could add any car to the VLN series, or the cars that we have, what would you pick?

It’s what we’re already getting soon. It’s a TCR car, and maybe GT4 cars since we don’t have any in iRacing. I think that’s what’s really missing in road racing right now.

I usually tend to not eat that much. Maybe some fruit or something. Nothing special. Most of the time I’m starving during the races, and get something to eat after the races.

Did you have a nice celebratory meal after the Interlagos race?

Yeah, my brother actually came over and we ate something together.

That’s probably what we are already getting right now, and that is more realistic weather. In my opinion, that really changes a lot because like a month ago, where we didn’t have the dynamic weather, it was always about who has the best pace, and that’s it.

Right now, with the dynamic weather, it’s not all about the pace any more. It’s about can you keep up good pace under all conditions? And that’s what I really like and I think that maybe benefitted us in the last race because we used to not have the overall best pace, but for example, last race, we were not the slowest, let’s say, all the time, and that was really good.

I’ll say that watching you guys make up that gap to Torque Freak at the end of the Interlagos race, that was impressive, so I guess those cooler track conditions suited you pretty well?

We actually made small changes right before the race so that we had a little more top speed, and I really think that worked out in the end. With the cooler track, cars that had good top speed like the Apex car really got a lot faster than the ones that were running really high downforce all the time. I think you could see that the Torque Freak car had more difficulties to overtake us than I had to overtake him.

8. The next question may either be really easy or really tough for you since this is your first NEO season. What is one current driver in NEO that’s never been your teammate, but who you’d like to run an endurance race with?

It’s maybe not a driver but I’d really like to drive a race with one of the really top teams like Race Clutch or Apex because it would be really nice to see how they prepare for the races and how they handle the things during the race.

I believe me and my brother, we are not that professional. We just do it for fun. Okay, we all do it for fun, but I think there are a lot of teams that are way more professional than we are, and it would be really nice to get a view on to how they manage things.

9. In the last interview, Simone Maria Marcenò had a question for a prototype driver — he didn’t know that it was you specifically. He wanted to ask whether you all could stop divebombing him from 150 meters back.

That’s a good question. Maybe he could drive the corners a little faster so that we don’t have to do it.

Ha ha, I’m sure he’ll love to hear that answer.

10. Do you have a question I can ask the next person?

I would really like to know what the next person thinks is the most competitive class in the NEO series.

Okay, excellent. Well, I will ask that, so Lennart, thanks again for joining us here on 10 Turns, and again, congratulations to you and Moritz and the Schubert team on that big win at Interlagos.

Yeah, thanks a lot for letting me be here and I really enjoyed it.

I hope you all listening enjoyed it as well. Feel free to stay tuned to neo-endurance.com and @NEOendurance on Twitter for all the upcoming coverage from the Suzuka round, and as we head into 2019, we’ll wrap up the second half of the season in style.