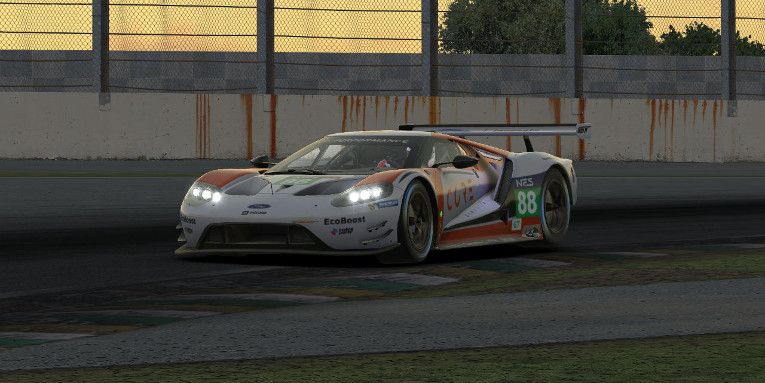 Perhaps no one feared NEO’s return to Interlagos more than the GT field. Two faster prototype classes promised to make their lives difficult at the shortest track on the schedule, and based on past history at the circuit, contact seemed inevitable for the slowest cars on the grid.

While GT cars were the victims of some — and causes of other — incidents during the race that eliminated a few contenders, the team standing atop the podium after six hours surprised no one, and their domination began in a tricky session that set the grid.

The 20-minute GT qualifying offered a good example of just how the new dynamic skies may affect competition. A timely cloud midway through the session dropped the track temperature by 10 degrees, so drivers on a flying lap during those fleeting minutes were able to improve their times before the sunny skies and hot track returned.

CoRe SimRacing’s Kimmo Suominen was one of those drivers, recording a best lap of 1:28.313 to take the pole position. Alongside him on the starting grid was a surprise, as Salva Talens recorded a lap just one tenth slower to put Euphoria Drivex Racing in second place.

Some familiar faces at the front of the grid started behind them. SimRC.de, Thrustmaster Mivano Racing, Team Eighty-Five, and Logitech G Altus Esports — the COTA winner — all lined up inside the top six.

When the green flag waved, SimRC’s Christian Koch was the driver on the move, taking second place by turn 1. However, catching CoRe would prove a difficult endeavor. Suominen had a lead of more than two seconds by the first time P1 traffic came through, and that lead only kept growing during the first stint.

The middle of the first hour was punctuated by a crash exiting turn 3 that collected several GT cars. Team Eighty-Five was caught in the three-wide situation that triggered the incident, while Team Buschfink Racing, Torque Freak Racing, Torrent Motorsports, and the Williams JIM Esports #97 were all caught up in it after the track was blocked.

Narrowly avoiding the crash was the MSI eSports #75 Porsche, which was the biggest mover early in the race. Marc Perez started in tenth but found himself in fifth by lap 23.

After the first round of pit stops, Perez found himself as high as second place. However, just over an hour into the race, MSI faced its first setback, receiving a black flag for avoidable contact with the iRacing Today Motorsports P2 car.

It wasn’t the only case of contact at that part of the race. A late divebomb in turn 5 by Altus on Mivano send the #83 Porsche spinning and ultimately to the penalty box, while the fight for third came to blows on lap 53 when Koch spun Euphoria’s Bebu Girolami in turn 2, ending the top-three run for the #67 team.

Contact and penalties for some of the top GT teams gave the running order a distinctly different look after two hours of racing. CoRe extended its lead to more than 30 seconds over Mivano, and the Army Racing Team moved up to third.

While COTA runner-up TRITON Racing found itself racing without Kamil Franczak and Dawid Nowakowski, who were participating in the Porsche SimRacing Summit, their Interlagos pairing of Marcin Skrzypczak and Piotr Jagodzinski were able to steadily climb from their twelfth-place start to as high as fourth. MSI’s recovery drive also landed their Porsche back inside the top five.

Even after new drivers took over, the next hour was just as chaotic. Torque Freak found itself on the toe hook back to the pits after contact from the #41 HPD, and SimRC incurred a controversial penalty for its role in the three-wide battle that saw the class-leading #57 prototype crash in turn 3.

TRITON also ran afoul of the rules when Skrzypczak bumped MSI’s Adria Perez in the infield, and a pair of teams who had been slowly marching from the back — ZENNITH eSport and Odox Motorsport — had officials calling their numbers for avoidable contact and exceeding track limits.

The second half of the race was thankfully calmer for most GT teams, but by then, the top positions were largely settled. CoRe’s Kenny Roosen continued to extend their lead, and as teammate Suominen took over for the run to the finish, he had no trouble holding on for the team’s second win of the season.

Army’s Jan Wiechowski and Dominik Blajer ran a quiet but successful race to secure second place. They did receive an assist when MSI took its second penalty of the race for contact with Odox, but MSI was able to hang on to a podium position in third.

Mivano made it two Fords in the top four with steady drives from Reinaldo Llerena and Luc van Schaik, while Redface Racing’s Laurent Miskiewicz and Benjamin Gonzalez had the highest-placed Ferrari in fifth place.

That position was settled with a thrilling last-lap pass by Gonzalez over Jagodzinski, which dropped TRITON outside the top five and into second place in the standings, just two points behind CoRe.

Behind them, the final hour was even crazier, causing some more shake-ups in the running order. The Williams JIM Esports #96 team had its best result of the season in seventh, although they had to survive a post-race investigation for contact with the SimatoK eSport Ferrari in the final ten minutes that ultimately gave them a 30-second penalty.

ZENNITH was also involved in a late incident, although they were merely the victim of contact with the Race Clutch P1 Porsche exiting turn 4. While they and SimatoK dropped out of the top ten, SRN Motorsports was the benefactor, climbing to a season-best eighth place on the strength of Karl Modig’s three stints behind the wheel.

Although Team Eighty-Four made a slow start, running dead last early in the race, they also recovered and found better pace on a cooling track to finish ninth. Euphoria’s race went the other direction, with their potential podium run ending in tenth.

Porsche Basel by Sorg Rennsport eSports survived the first prototype contact of the race to finish eleventh. After being damaged in the first-hour crash, Buschfink came home in twelfth, and ZENNITH’s late crash left them in a disappointing thirteenth.

Altus couldn’t recover from its early penalty-causing crash with Mivano, putting the COTA winners in fourteenth. The late contact at the hands of the #96 car dropped SimatoK down to the final points-scoring position.

SimRC’s promising early drive ended with a sixteenth-place finish, and Torque Freak must have felt like a punching bag en route to seventeenth. Odox had a potential top-ten drive going before technical problems ended their race in the final hour. They failed to finish along with nineteenth-place Team Eighty-Five.

The Williams #97 team is still point-less on the season after finishing twentieth, and Torrent’s heavy hit within the first half hour ended their race with a twenty-first place outcome.

While it’s easy to think of Interlagos as a wildcard on the schedule for GT teams — much like NASCAR drivers may treat a close-quarters short track or IndyCar stars may view a draft track where contact is likely — it’s certainly tough to discount the strength shown by the top-finishing teams.

CoRe proved that its COTA stumble was just a fluke, and with the championship lead back in hand, it’s hard not to like what they’re accomplishing in the little-loved Ford GT. The newcomers from Army Racing Team and MSI eSports also look like teams on the rise, aside from some penalty problems in the past two races.

For those teams, the nightmares about how Interlagos could have turned out can now fade away as they focus on Suzuka. And for other contenders whose races went awry at the hands of prototypes, GT competitors, or the strict sentences of the stewards, they may be doomed to relive those bad dreams as 2018 comes to an end.