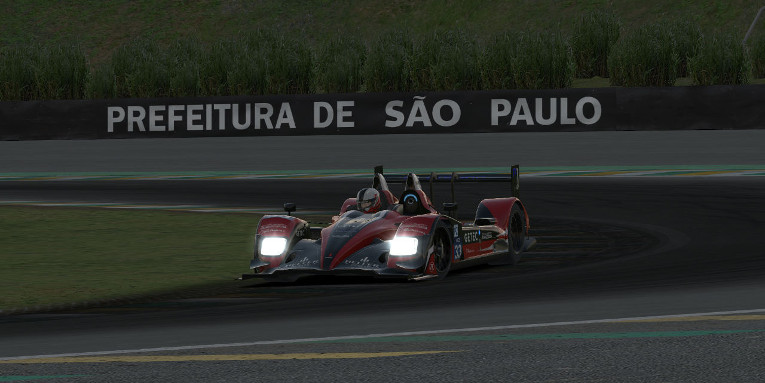 As NEO’s new middle class this season, P2 teams at Interlagos must have felt the same way as Stealers Wheel described in their 1972 hit song: Clowns to the left of me, jokers to the right. Here I am, stuck in the middle with you.

At the shortest track on the schedule, HPDs found themselves in some tight, often three-wide spots surrounded by P1 and GT cars. It proved to be a dangerous spot, as those situations ended the chances for a pair of pre-race favorites and allowed an underdog team new to this season’s grid to take control.

One of the few moments alone for P2 cars all race was in qualifying, and for the first time this season, Race Clutch — looking to end its streak of consecutive DNFs — captured the pole position and made a quick getaway once the green flag waved.

While races are rarely won on the first lap, a strong start certainly helped the chances for Schubert Motorsport, which saw driver Lennart Fricke move from fourth to third by turn 4. Meanwhile, the undefeated AVA Vervatic #39 team slipped back to sixth at the start.

Their shot at another win was about to take a much bigger hit. AVA’s Pascal Stix was in the middle of a three-wide multiclass race through turn 3 just 25 minutes into the race, and after contact occurred, his car became a pinball as the field piled in behind.

They weren’t the only P2 team to suffer damage in the crash. Inertia SimRacing Corsac and TNT Racing arrived on the scene just as the track became blocked, and behind them, neither SRN Motorsports or the Luxsim24 MOATF Podcast car could miss the Team MAD prototype as it checked up for the wreck.

With that incident erupting in the middle of the P2 field, it created a big gap between the top four teams and everyone else. It also brought some new names into the top half of the field. Both the World of SimRacing Team with Iker Estefania driving and the RacingCenter Vib3sports HPD driven by Louis Klinkhammer made it as high as seventh place during the first stint.

While the drivers at the front had separated themselves, that didn’t mean there wasn’t still a close battle. Several seconds adrift of race leader Yohann Harth in the Race Clutch car, the trio of Apex Racing UK’s Alex Simpson, Schubert’s Fricke, and UI1-Positive SimRacing’s Glenn Key were largely inseparable, and they waged an entertaining fight even as they worked through traffic.

The first trip down pit road saw a mix of strategies for the top P2 teams. While Race Clutch and Schubert opted to change tires to better handle the 50°C track temperature, Positive SimRacing and Apex took fuel only.

When the stops were complete, Apex held the lead, but it didn’t last long. Simpson ran wide in turn 1 on lap 46, allowing Key to set up the pass and move the 45 car to the front of the field for the first time this season.

Twelve laps later, Simpson picked up damage when he slammed sidepods with the Wyvern Racing P1 car on the frontstretch. By the end of that stint, Apex had fallen nearly 40 seconds behind in a distant fourth place while Race Clutch on fresher tires had closed the gap to Key to less than 10 seconds.

Apex’s slide continued when Ferenc Kern took over, and their #60 HPD fell back to sixth behind the IRDK Endurance and Torque Freak Racing cars, who both narrowly avoided the early crash.

The leaders also changed drivers during their second pit stops, and Race Clutch’s Aurélien Talmon picked up where Harth left off, turning some quick laps to close in on Daniel Benefield — a recent transfer from Positive SimRacing’s P1 program.

Just as the lead battle was heating up, another three-wide moment in turn 3 ended the race for a P2 contender. Talmon found himself between the Sorg P1 and the SimRC.de GT, and a squeeze on corner exit sent Talmon spinning and the polesitters dropping out of yet another NEO race.

The early exits for two pre-race favorites, plus the damage to the season-long contenders from Apex, left a void at the top of the P2 field for a new team to fill. Positive SimRacing appeared to be the natural successor, but contact on lap 118 with both the Race Clutch P1 and the MOATF Podcast HPD damaged their car and their chances.

While Key still had the lead when he got in the car with two hours remaining, the battle at the front was heating up once again. Torque Freak’s Dirk van Tulden and Schubert’s Lennart Fricke had closed in, and a risky outside pass by Key at Junção on lap 178 left him spinning.

Torque Freak and Schubert then raced side-by-side into turn 1, but a spin by Fricke in the turn-1 marbles also proved costly and seemed to put van Tulden on the road to victory.

However, Fricke had the pace to catch back up, and just 14 laps later, he executed a similar outside pass in turn 1 to perfection. With the lead in hand, Lennart Fricke and his brother Moritz, who handled the middle two stints, held on to secure an improbable but impressive victory in only Schubert’s third NEO race and less than a year after they both joined iRacing.

After falling as far as sixth place, Apex made a strong recovery to take second at the finish, with repaired damage and Simpson’s speedy driving propelling them past Torque Freak with 11 laps to go.

IRDK ran a quiet but successful race, and Marcello Maio’s pass on Key in the final half-hour left them in a season-best fourth position at the finish. Positive SimRacing’s late-race fade from the lead ended in fifth place.

The World of SimRacing Team continued climbing up the running order after its clean first stint, and Estefania and teammate Andres Quintana finished in sixth to secure the team’s best NEO result to date.

Team Heusinkveld, which made an early pit stop to go off-sequence and avoid the worst of traffic, ended up in seventh ahead of TNT Racing, which was damaged in the early crash but recovered to finish eighth.

A mid-race penalty dropped the RacingCenter Vib3sports team down the order, but their #41 HPD still ended up inside the top ten for the first time in NEO competition. The battered MOATF Podcast car finished a lap behind them in tenth.

With a fourteenth place result, AVA Vervatic had its winning streak snapped and its points lead erased, as Apex Racing UK now assumes the top spot in the standings.

After contact in the early crash, Team MAD and SRN Motorsports finished fifteenth and sixteenth, respectively, while for the third straight race, Race Clutch failed to finish.

While that team’s tough luck is becoming routine, the rest of the P2 competition is anything but predictable. With two first-time winners in three races, multiple lead changes on track in every event, and a tight points battle developing, NEO’s second class is quickly becoming the most exciting to watch.

Being stuck in the middle isn’t always easy, but it has certainly created some action among the HPDs this season.