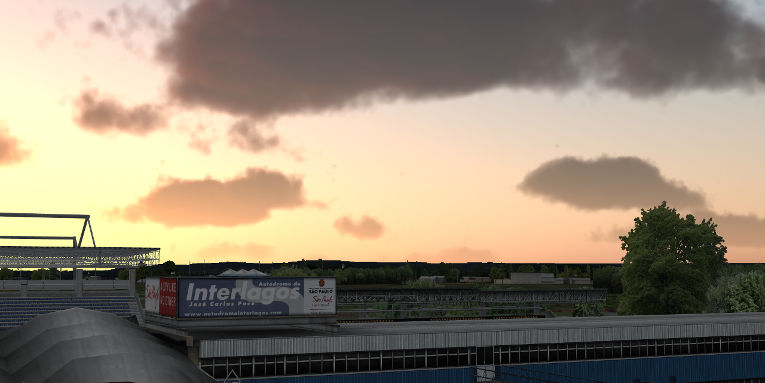 It was already perhaps the most feared track on the schedule due to its short length and endless traffic, but the recent addition of day-night transitions has added yet another element of suspense leading up to this weekend’s 6 Hours of Interlagos.

In this race preview, we look at the challenges of this race and circuit with help from team representatives in each class of the NEO grid.

The NEO Endurance Series visited Sao Paulo’s Autódromo José Carlos Pace in each of its first two seasons but has not returned since then — that is, until this week.

The following season saw controversy erupt at Interlagos due to numerous incidents and concerns over driving standards, as we detailed in a recent article. Team Chimera and its current drivers Jack Keithley and Ben Tusting survived the race unscathed to win in their HPD.

Another pair of current NEO entrants won in the GT1 class. Thrustmaster Mivano Racing’s Aston Martin topped the field with Tommaso Carlà and Fabio Gonzalez behind the wheel. The GT2 victory went to SimRC.de, who will field both a P1 and GT Porsche this weekend.

The FIA World Endurance Championship has also spent several years away from Interlagos. Their last visit was in November 2014, when the Porsche 919 Hybrid of driven by Romain Dumas, Neel Jani, and Marc Lieb earned the victory.

Just as NEO is returning to Interlagos, the WEC has announced a race at the circuit in February 2020. Perhaps those real-world drivers can get a refresher in the workings of multiclass racing around Interlagos by tuning in this weekend. RaceSpot’s broadcast on the iRacing eSports Network begins with qualifying at 13:50 GMT, and the green flag waves just after 15:00 GMT.

Interlagos packs a lot into its 4.3-km layout, with two long straightaways and 15 corners for drivers to negotiate, all while fighting for positions and handling traffic. That varied layout means teams will have to compromise on their setups to be successful over a full lap.

“Too much downforce and you are too slow on straights; not enough and you suffer through the infield,” added Joonas Vastamäki from Inertia SimRacing Corsac’s P2 team.

“Each of the medium and slow corners have big impact to your lap time so you need good mechanical grip there,” said Wiktor Smolarczyk from the TRITON Racing GT entry. “But if you aren’t fast on the two long straights, you won’t able to overtake other cars. The balance between them is really demanding.”

A lap around Interlagos begins with one of its toughest corners. Turn 1 has a slightly cambered, downhill braking zone, and braking too late or carrying too much speed can easily cause a spin. A good run through that corner is required to set up turn 2 — the exit of the Senna S — as the elevation continues to drop.

The long left-hander at turn 3 should be flat out for all three classes, but it’s not without its challenges. Faster traffic will have to decide whether to risk an outside pass or wait until the exit to make a move up the inside. The paved runoff beyond the kerbing is also a tempting spot to test the track limits.

“I think the third corner is the toughest in terms of the incident amount,” said Simone Maria Marcenò from Logitech G Altus Esport, the winning GT team in last month’s 6 Hours of COTA.

After the second-longest straightaway, the tight Descida do Lago complex awaits, and it presents the same sort of temptation for drivers looking to carry some extra speed.

“It is very easy to slip just a bit wide at the exit of turn 4 and get an unnecessary off track,” said Vastamäki. “Take them a bit too often and you have trouble for rest of the race.”

The off-track limit for this race is a balance between the ones from Sebring and COTA. After 15 off-tracks, teams will receive a warning, and for each 15 after that, they will incur a drive-through penalty.

A lap at Interlagos continues through the infield section, which features the slow-speed right-left-right sequence of turn 8, turn 9 (Pinheirinho), and turn 10 (Bico de Pato).

The main challenges here will be watching how nicely the different classes play together. For GT drivers, that means defensive driving as part of “traffic management in the hairpins against P1s,” according to Marcenò.

Cars then exit the infield through Mergulho, using every bit of astroturf on the right side to set up Junção, which could be the most important corner on the track since it leads onto the frontstretch.

“Not only is it the longest area at full throttle, but you need a good exit to climb the hill to the line,” said Rowland.

In all three classes, it’s a quick trip around Interlagos. P1s can expect to get around in less than 1 minute, 20 seconds — easily the shortest lap on the calendar. HPDs will lap the track in just under 1 minute, 25 seconds, and GTs should clock in at a little less than 1 minute, 30 seconds.

That means P1s should lap the GT field roughly every 9 or 10 laps, and the P2 field in about 13 laps. P2s should converge on GT cars every 14 to 17 laps, or about three times per hour.

After the chaos of the last NEO race at this circuit, teams are wary of traffic and how it could impact the race. However, none of our team representatives seemed to overthink traffic management. Instead, they say it comes down to fundamentals and common sense.

“As a P1 driver, we have to negotiate traffic. It is not the job of a P2 or GT to get out of the way. Therefore, I would ask the other classes to just simply hold a single line and be predictable,” said Rowland.

From the GT perspective, the key tip for faster classes seems to be not to make any sudden, low-risk moves.

Our P2 representative kept it even simpler than that, trusting the level of talent in NEO to handle any potential issues.

“I believe that every driver in this series is capable of handling traffic so there is no need for any advice from me,” said Vastamäki.

Rather of traffic, another feature certain to impact the Interlagos race — the new dynamic time of day system — has teams talking ahead of its first implementation in NEO.

“It’s the most important thing in iRacing thanks to the new build,” said Smolarczyk. “Our team will think about employing a meteorologist. We want know earlier than others when clouds are coming and where shadows will give more grip.”

One word that both of our prototype representatives brought up was adaptation.

“This is tricky,” said Rowland. “Few to none of us will have done any true extensive long runs in variable weather conditions. I believe it will be a case he who adapts first, wins.”

“Weather can change so much that it is pretty much impossible to practice for every possible situation,” added Vastamäki. “It will be a case of who can adapt fastest and finds the right windows.”

The end of the race will see very different conditions than the beginning given the changing time of day. While the green flag will fly just after 1:30 pm local time, the race will finish at sunset, around 7:30 pm.

Along with fighting traffic and fluctuating track temperatures, add fading light levels to the complicating factors teams will face in this race.

Just as NEO’s last trip to Interlagos was a race to forget for many teams, this event could be one to remember as the iRacing environment becomes even more dynamic.