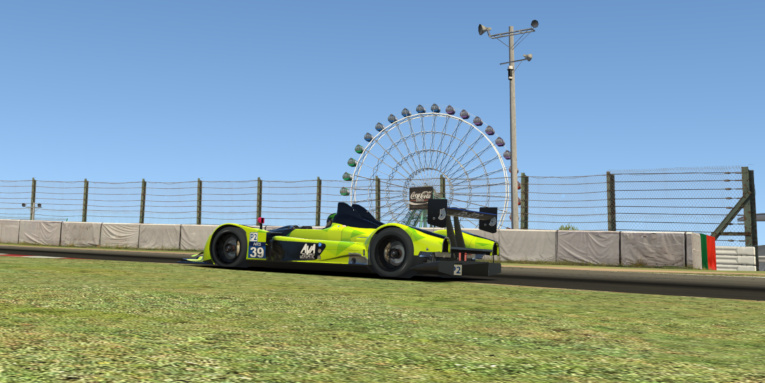 NEO’s longest-tenured car, the HPD ARX-01c, is has tested teams for five seasons now, but after 24 hours of racing at Le Mans later this month, a first-time P2-class champion will be crowned.

The start of this season saw plenty of unknowns for the prototype class due to the introduction of the higher-level P1 cars and the departure of several top teams and past champions. That left the door open for new names, and one rookie team wasted no time making its name known in the NEO Endurance Series.

AVA Vervatic has impressed all season, with Sven Neumann and Pascal Stix showing speed and an impeccable ability to recover from mistakes. They’ve won four of the five races so far, with their only blemish coming at Interlagos when a multi-car accident claimed their #39 HPD, among many others.

With a 20-point lead entering Le Mans, a sixth-place finish or better will secure the championship for AVA, but just like the P1-leading Thrustmaster Mivano Racing team, they’ll surely be hoping for their fifth victory to close out the season, and their recent roster addition of Fabrice Cornelis could make them an even bigger favorite.

The battle for second in points is a tight one between Torque Freak Racing and the Apex Racing Team. Their seasons have followed similar trajectories, with podiums in the first three races followed by stumbles at Suzuka. A second-place result in last month’s race at Spa has given Torque Freak a one-point advantage, so whoever finishes higher at Le Mans will come out on top.

It’s also a close fight for fourth place between IRDK Endurance and TNT Racing. They’re also just one point apart, with each team recording one podium this season at Suzuka. Although they haven’t quite had the speed to challenge for race wins, any stumbles by the teams ahead of them could elevate one of these squads into a top-three overall finish in the standings.

The next few teams are still mathematically in championship contention, but their focus at Le Mans will likely be on holding a top-eight position and securing an automatic invitation to next season’s grid.

UI1-Positive SimRacing has been one of the hottest teams in class recently, culminating in their battle for the lead at Spa and eventual third-place finish. Glenn Key and Daniel Benefield have looked comfortable and quick at the wheel of the #45 HPD, and their five-driver lineup representing three different continents seems well-equipped to handle the rigors of a 24-hour race.

Seventh-place Team Heusinkveld, the Suzuka polesitter, hasn’t come home with the results it hoped for this season, but their team including recently crowned DGFX P2-class champions Ronny Fantini, Christian Kiewitt, and Marcel Tie clearly have the talent to lock up a top-eight result with a solid Le Mans run.

They enter the finale three points ahead of Schubert Motorsport, whose season was highlighted by a surprise win at Interlagos. Aside from that race, though, brothers Lennart and Moritz Fricke and teammate Tim Stebani haven’t finished higher than eighth. With double points available at Le Mans, they may need a better result than that to stay inside the top eight.

Just five points behind them is the World of SimRacing Team, which has looked like one of the top mid-field teams in recent rounds. Alvarez Benedi, Iker Estefania, and Andres Quintana combined to finished sixth at Interlagos and Spa, and if they can show similar speed and clean driving at Le Mans, they could jump up a position or two in the final standings.

Tenth-place Inertia SimRacing Corsac is ten points behind the cutoff, and while they’ve shown top-five speed for much of the season, a series of unfortunate events — from hitting the tires on lap 1 at Sebring to contact with a GT car early at Spa — have put them in desperation mode entering Le Mans.

While double points keep them in the hunt, as driver Joonas Vastamäki noted in our recent roundtable discussion, “we need to score at least a podium to have a strong chance of top-eight finish.”

The teams just outside the top ten in points have been part of the competitive P2 mid-pack all season, but they haven’t notched the strong finishes needed to put them in top-eight contention.

Eleventh-place SRN Motorsports and twelfth-place Team MAD have been nearly stuck together on track in the past two rounds, and they enter Le Mans just one point apart. While a top eight is unlikely, they may at least be able to enjoy another tight battle with one another to close out the season.

The LuxSim24 MOATF Podcast team has shown signs of its potential, including a fifth-place run at COTA, but a DNF at Sebring, a pit lane start at Suzuka, and a late-race crash at Spa have cost them valuable points and any realistic chance of an automatic invitation to season six, as they enter Le Mans 17 points out of eighth place.

In their first season on the NEO grid, iRacing Today Motorsports has competed in the strongest fields they’ve ever been a part of, but to their credit, they’ve scored points in each round. They’ll likewise look to keep the #54 HPD on track all race at Le Mans and complete all 54 hours of racing this season.

Perhaps the worst luck in the NEO field this year has belonged to Race Clutch’s HPD team, whose championship hopes were dashed by four consecutive DNFs. The last two remaining drivers on their roster, Robin Bondon and Aurélien Talmon, finished fifth at Spa, but even if they run well at Le Mans, it’s likely to be too little, too late for their points positioning.

Two of the final teams to make this season’s grid in pre-qualifying occupy the final two spots in the standings. RacingCenter Vib3sports and the Roadbasterds have struggled at times with pace and on-track incidents this season, but they’re just one point apart entering Le Mans, which means bragging rights will be on the line in the 24-hour race.

Even if we had a crystal ball six months ago, it might not have predicted the turns of events in the P2 class this season, from rookie teams winning the first five races to one pre-season favorite failing to finish the first four.

It just goes to show that even after five years of competition, the oldest car in NEO still has a few secrets tucked away in that unused passenger seat.