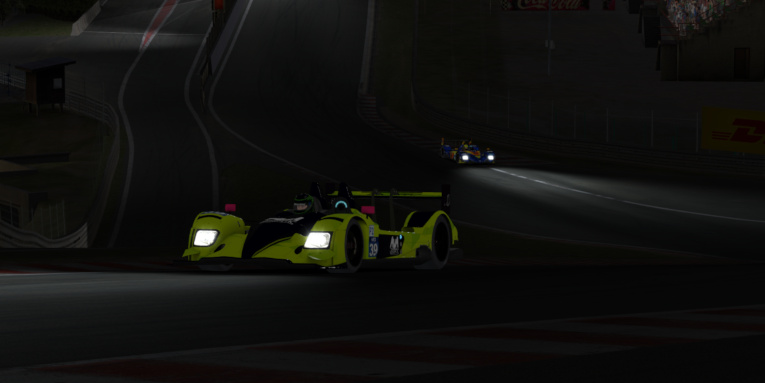 For some race teams, running anywhere but the front of the field is a cause for concern. Others seem at their best when they’re charging through the pack to get back in contention. The most well-rounded teams are equally comfortable with either approach.

That has been the case for the points-leading AVA Vervatic team in this season’s NEO Endurance Series P2 class. After starting the season with a pair of easy-looking wins at Sebring and COTA, they found themselves at the rear of the field early in last month’s race at Suzuka, but managed to climb up the running order and back into victory lane.

Last weekend’s six-hour race at Spa would put them in a mixture of both scenarios, but the end result was the same: another victory lane appearance for Pascal Stix and Sven Neumann.

That result didn’t come without a day-long fight that began in qualifying. Torque Freak Racing’s Ronny Nunez took the pole position, but just a tenth and a half separated the top five in class, including second-place Marcello Maio for IRDK Endurance, third-place Aurélien Talmon for Race Clutch, and fifth-place Daniel Benefield for UI1-Positive SimRacing.

At the start, Torque Freak held the top spot but AVA was on the move, with Neumann climbing to second place by lap 10 and into first just past the one-hour mark.

His lead was short-lived, though, as Benefield began a surge of his own to move up front on lap 39. That began a battle that saw the two — eventually with Stix behind the wheel for AVA — trade the first position multiple times.

Their fight came to a head on lap 92 when Stix attempted a late pass up the inside of Benefield on the left-hand kink before Blanchimont. The #45 UI1-Positive SimRacing car was sent spinning by the contact and stewards deemed Stix wasn’t far enough alongside to make the pass attempt, which landed him a 15-second stop-and-hold penalty.

Torque Freak, who was just seconds behind when the incident occurred, was the main benefactor. Dirk van Tulden inherited the lead after AVA served its penalty, and when Nunez took over with 95 minutes to go, he had a five-second lead over PSR’s Glenn Key and more than 20 seconds over Neumann.

While that back-and-forth battle for the lead attracted most of the attention and was setting up for a dramatic conclusion, there was plenty of other action in the P2 class during the first four hours of the race.

The fight for fourth place was also a close one. Early on, Apex Racing UK and Race Clutch swapped that position multiple times, with Apex’s Alex Simpson eventually claiming the spot when Talmon spun on lap 37.

By the middle of the race, another challenger had emerged. After starting in eleventh, the World of SimRacing Team’s Carles Alvarez Benedi logged a monstrous quintuple stint to move up to third place. Along with a strong pace, Benedi benefitted from a penalty to Apex that dropped the #60 HPD as low as twelfth in class.

The midfield saw its usual volatility in this race, with the running order shuffled by varying pit strategies and driver changes. Team Heusinkveld looked to build on its strong pole-winning run at Suzuka, and early on at Spa, they ran as high as fifth.

By the two-hour mark, they fell into a tight battle with TNT Racing’s Robert Tinsey, Schubert Motorsport’s Moritz Fricke, and Race Clutch’s Talmon, who was recovering from his earlier spin.

A unique but time-tested pit strategy had IRDK off-sequence but also in contention throughout the race. Maio boxed early in the first stint before encountering GT traffic, and he was briefly rewarded with the race lead before hitting pit road again.

While that strategy landed them on the podium at Suzuka, in this closely matched race at Spa, making the equivalent of an extra pit stop along with a few other bumps along the way ultimately had IRDK struggling to hang onto a top-ten position.

With different strategies at play, penalties and spins forcing several teams to play catch-up, and the cooling track favoring those who trimmed out their prototypes, the final hour-and-a-half provided some of the best racing of the season throughout the top ten.

As in the P1 class, the battle for the win took center stage. Nunez could only watch as his advantage over AVA shrunk. Entering the final hour, that gap stood at 16 seconds. Neumann got around Key with a clean but daring three-wide pass in traffic down the Kemmel Straight with 27 minutes to go, moving AVA up to second place.

From there, Neumann took tenths out of Torque Freak’s lead each lap and was soon under the rear wing of the #48 car. With nine laps to go, Nunez was forced to follow a GT car through Eau Rouge and Raidillon, and Neumann used it as a perfect pick to slingshot him past Torque Freak down the straightaway.

The battle wasn’t over, though, as Nunez stayed locked in the draft and didn’t let Neumann get away. As the P1 leaders passed them on the final lap, the top two in P2 had an almost equally close fight to the checkered flag separated by less than two seconds.

In the end, it was again AVA showing its strength in a recovery drive to take their fourth win in five races this season. With its fourth podium, Torque Freak continued a solid season that has only been upstaged by AVA’s mastery of the class.

Just nine seconds behind those two at the finish, Glenn Key delivered the first podium of the season for UI1-Positive SimRacing, but after fighting for the lead earlier in the race, a third-place finish might have left them wondering “what if?” about their Spa result.

The fourth-place fight was also decided in the closing laps when Iker Estefania brought the World of SimRacing Team’s #51 car to pit road for a splash of fuel, handing the position to Apex’s Yohann Harth — a recent transfer from Race Clutch.

Estefania lost another position when Robin Bondon made a last-lap pass entering the Bus Stop, moving Race Clutch back into the top five and dropping the World of SimRacing Team to sixth, tying their Interlagos result for their best this season.

Team Heusinkveld’s Ronny Fantini got around Schubert’s Lennart Fricke in the final half-hour to secure seventh place, while Schubert was eighth and TNT finished ninth. IRDK’s off-strategy plans didn’t work as expected, and their second-place start culminated in a tenth-place finish.

Behind them, SRN Motorsports and Team MAD resumed their late-race scrap from Suzuka, and this time, SRN came out ahead in eleventh while Team MAD was twelfth.

The Luxsim24 MOATF Podcast team was running seventh in the final laps when contact from a P1 car sent them crashing at Eau Rouge. Neil Andrews was unable to limp their damaged car back to the pits, and they fell down the results to thirteenth.

The final two finishers were RacingCenter – Vib3sports and iRacing Today Motorsports, who were each three laps behind the class winner.

Failing to finish were sixteenth-place Inertia SimRacing Corsac, who collided with one of the Williams JIM Esports Ferraris early in the race and retired a few laps later, and the RoadBasterds team, which did not put in a qualifying lap and never made it to the starting grid.

Entering next month’s RaceSpot 24 Hours of Le Mans, the requirements for AVA are fairly clear. With a 20-point lead over Torque Freak and double points on offer in the finale, they need to finish sixth or better to secure the championship.

However, what’s less clear is exactly how AVA will manage its own race in the longest event of the season. One of its greatest strengths — the talented tandem of Stix and Neumann — could become a weakness at Le Mans.

If they choose to do the 24-hour race as a two-man team, they could fall victim to the stress and fatigue of a long race. Or if they add an extra driver or two to their rotation — both Carsten Wasner and Ville Ruola are also on their entry list — that could upset the delicate balance between two teammates who have clearly gelled behind the wheel.

In either case, for the team that has shown amazing adaptability all season, they should be prepared to handle whatever new situations emerge in the season finale. And if they can do that, the championship will deservedly belong to them.