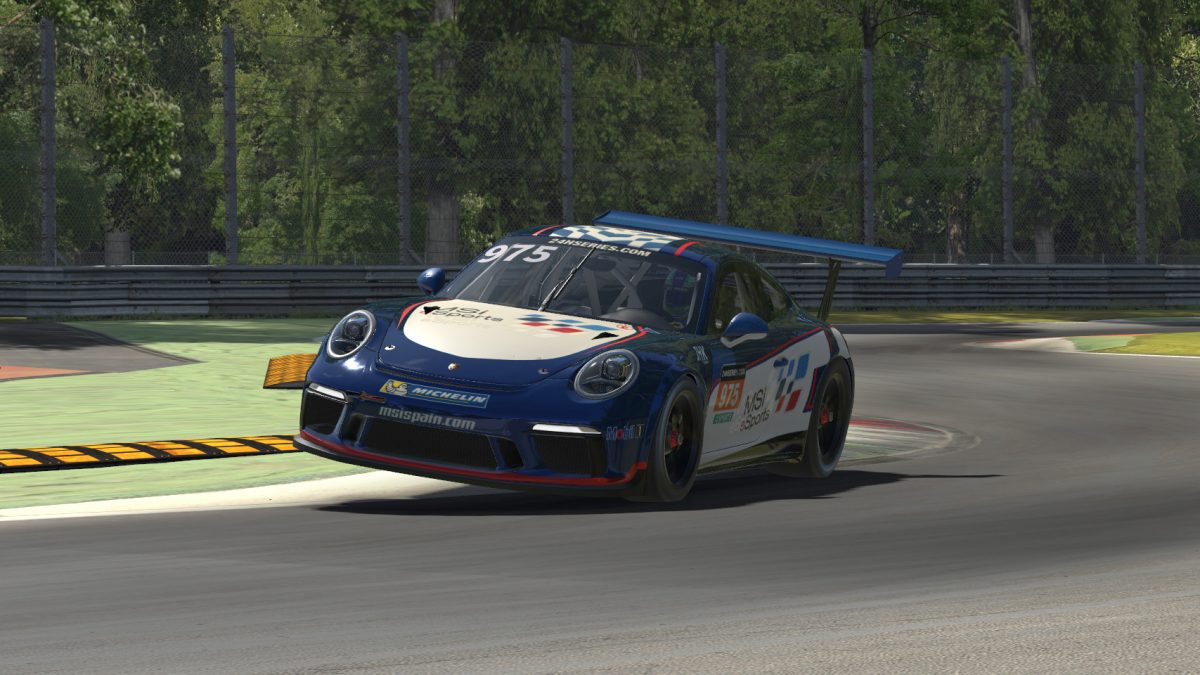 In case you didn’t hear the message over the roar of their flat-six engine, MSI eSports’ 991-class team is happy to repeat it for you.

Even though one round remains in this 24H SERIES ESPORTS season, the class championship has already been clinched, and that achievement represents an entire year’s worth of work and progress for the Spanish sim racing team.

But before they experienced the thrill of victory, their story begins with the agony of defeat.

After 24 hours of racing at Le Mans and one of the closest battles of the season in the closing laps, MSI finished just seconds behind Logitech G Altus Esports, whose fourth win of the season secured them the championship.

Along with Álex Ardisana and Adria Perez, Alejandro Sánchez and Marc Perez were part of that MSI team, and they both describe their main emotion after the loss as “frustration”.

“Losing, and by such a small margin, is something that nobody likes, and even though we were second, it felt like a failure to me,” said Sánchez. “We had a lot of issues that race, including a game crash when I was driving, but in the end Altus had a lot of pace all season long and with that speed, they also deserved it.”

Reflected Perez about the Le Mans race, “it was our moment.”

“We reached it with a chance to win the championship after crossing the line in second place for many races,” he said. “But I feel we should be proud of the season we put together.”

Indeed, second in points in iRacing’s longest-running endurance league was an impressive achievement, especially considering that Perez and Sánchez have only been iRacing members since 2015 and 2016, respectively.

Yet in their relatively short times on the service, they have quickly established themselves as some of the fastest drivers on some of the top teams. Originally members of the Iberica Racing Team, in 2018 they both moved to MSI eSports.

While MSI may have been an unfamiliar name to some when they made their NEO debut, the roots of the team run deep in the sim racing world.

“MSI eSports as such already existed, just under another name, Teo Martín eSports, founded by Julián Rodriguez,” said Perez. “As we left IRT, the majority of us joined and the team changed names in order to boost the image of the Motor & Sport Institute, one of the biggest motorsport facilities in Europe.”

MSI is based in Madrid and boasts “15,000 m² of cutting-edge technology and a vast majority of the most emblematic race cars in history,” according to Perez. They also established one of the first sim racing driver academies through their collaboration with the Teo Martín team and eventually the rebranded MSI eSports.

Salva Talens is the newcomer of MSI’s championship-winning trio in the 991 class, but you might say he has been on the team’s radar for a while.

A pair of second-place qualifying efforts in season five by Talens, then with Euphoria Drivex Racing, at Interlagos and Spa put him ahead of MSI on the grid, and he recalls how difficult it was to stay in front of his Spanish countrymen.

“I remember that during the last season, I always wanted to be as close to MSI as possible, because they were always at the top,” Talens said. “Beating them was extremely hard, but I remember having some fights with them like at Suzuka or Le Mans.”

As the team geared up for another shot at NEO glory — and began preparations for the Porsche Esports Supercup (PESC), iRacing’s highest-tier road racing championship — they converted one of their greatest rivals into one of their own drivers.

“I always had a good relationship with everyone involved in MSI, in and outside the track, so they decided to add me to the team to race with Alejandro and Marc this season,” said the eighteen year-old Talens, who has been karting for about ten years and iRacing since 2016.

The combination of those three already made them a strong contender, but the announcement of this season’s new class structure gave them even more hope for success.

“When the 24H SERIES ESPORTS was announced, all three of us wanted to drive with the Porsche 911 GT3 Cup because we like this car a lot and it was also perfect for preparing for the PESC qualifying series, so we never had any doubt of what car were we going to choose,” said Perez.

Given their experience in that car, they set their expectations high, but they’ve still managed to exceed them with their dominant performance this season.

“We never thought that we were going to win all the races, but it is true that our main goal was to win the championship,” said Talens.

However, that has still presented a few challenges, beginning with the sheer amount of effort needed to meet their goal.

“We knew that we had to work very hard with this car if we wanted to achieve it,” added Talens, and they have the data to prove just how much work they’ve put in.

Sánchez logged almost 500 laps and nearly 20 hours of practice time while preparing for last year’s PESC round at the Nürburgring, and that extensive effort has continued through this NEO season.

For their opponents who have questioned how MSI can be so fast — out-qualifying the next-closest team by more than two tenths in the first four rounds this season, and typically pulling seconds ahead before the first round of TCR traffic — they are happy to share a few tips for getting the most out of the fun but tricky Porsche 911.

“It’s my favorite car on iRacing, but I would say one of the key points is braking,” said Sánchez. “It’s a car that requires some finesse in the long braking zones, especially after the tire update, and that needs to be at the limit of locking up in order to be fast.”

Load-cell pedals help with consistent threshold braking, he said, and his new OSW steering wheel also made it easier to master one of this car’s unique handling quirks.

“Due to its rear engine and rear-wheel drive layout, it allows you to accelerate really soon, and keep it pinned from there. It is essential to stay on it once you accelerate, countersteering a little bit, very similar to a go-kart.”

For Sánchez and MSI, the main key to success has simply been the work they’ve put in along the way.

“The biggest secret of them all is practice,” said Sánchez. “Seat time with this car is the most important thing to find speed.”

That included when the car was updated to the version-7 tire model earlier this season.

“I had to put in quite a few hours in order to understand these new tires and develop a setup as competitive as we had before the update, helping my teammates in the qualifiers as well.”

Those PESC qualifiers also overlapped with the 24H SERIES ESPORTS series over the winter, presenting another challenge for their team of three, which is among the smallest in the class.

“Marc and I had some difficult moments because of interference with the PESC qualifying series, but Alejandro knew this and covered us as much as possible,” said Talens.

The effort has been worth it for the team. Sánchez was already qualified for this year’s Porsche Esports Supercup due to his performance last year, finishing in fifteenth overall, just behind the likes of the “world’s fastest alien”, Greger Huttu, and 24H SERIES ESPORTS TCR-class points leader Jack Sedgwick.

Perez currently sits ninth in the qualifying series standings, and as long as he remains in the top twenty through the final weekend of the season, he will join his teammate in the upcoming ten-race championship.

Talens is twenty-ninth in points, but he has had a highly successful sim racing season in several other series.

In December, he reached the finals of the “Piloto Michelin” competition held at MSI and finished third overall, with Sánchez taking the victory. Also in December, Talens was crowned as the champion in the ESL Racing Series MAPFRE season.

For their efforts, Talens and Sánchez earned test drives in real-world equipment, including a Formula 3 car, a McLaren 570S GT4, and a Honda Civic Type R. Through his affiliation with MSI, Perez also had an opportunity to take a McLaren GT4 car for a spin around the Jarama circuit.

Of course, with so much happening on both the real and virtual racetracks, it could have been easy for MSI to lose sight of their goals in the 24H SERIES ESPORTS this season, potentially letting a lack of practice or a miscue in traffic cause a race win — or the class championship — slip away.

They have had a few scares, namely in the season-opener at Spa, when Perez slid across the runoff at Blanchimont to avoid contact with a TCR.

“When the incident happened, I thought I was going to end up in the wall, but I managed to regain control of the car without locking up so that the hit was as smooth and lateral as possible,” said Perez. “Luckily enough, it was a tire barrier. I thought that the car was completely broken, but two corners later I saw that it wasn’t serious and we took a deep breath.”

Since then, it has been mostly smooth sailing for MSI at the front of the 991 field. However, they still needed a bit of luck and patience in the latest round at Monza to wrap up the title.

“In Monza with Alejandro, we were lucky two times to avoid an incident during the start and then also later in the race in turn 1 as well,” said Perez. “We knew that we had a chance to win the championship in Monza and we were extra cautious in that race.”

Despite their cautious approach, their pace again prevailed, and despite starting one position behind their championship rivals from DV1 TRITON Racing, MSI finished four spots ahead of them to lock up the title.

That ensured they would avoid a repeat of last year, in which they lost the points lead and the championship in a heart-breaking enduro to end the season.

“It was a big relief for us because we were racing with the fear that maybe the race in Monza could be problematic, and then the last round in Barcelona with twice the points wouldn’t allow us to make a single mistake in a longer race,” Perez noted.

But just because the championship is already clinched, MSI’s 991-class competitors shouldn’t expect them to ease up just yet. They still have one more accomplishment in their sights: the first undefeated season in NEO history.

“We’ll be racing calm now that we just won the championship,” said Perez, but added “all three of us will try to race.”

“We will train for this one as if it was just another race and then we’ll try to win this ‘home’ round to wrap up what would be a perfect season.”

Just as 30 hours of racing so far this season has proven, if anyone is going to beat MSI in the final 12 hours at Barcelona, they might just have to outwork them for it.

For the rest of the field, such a task carries another message — this one very much unspoken from the humble trio of Perez, Sánchez, and Talens.

Good luck with that.