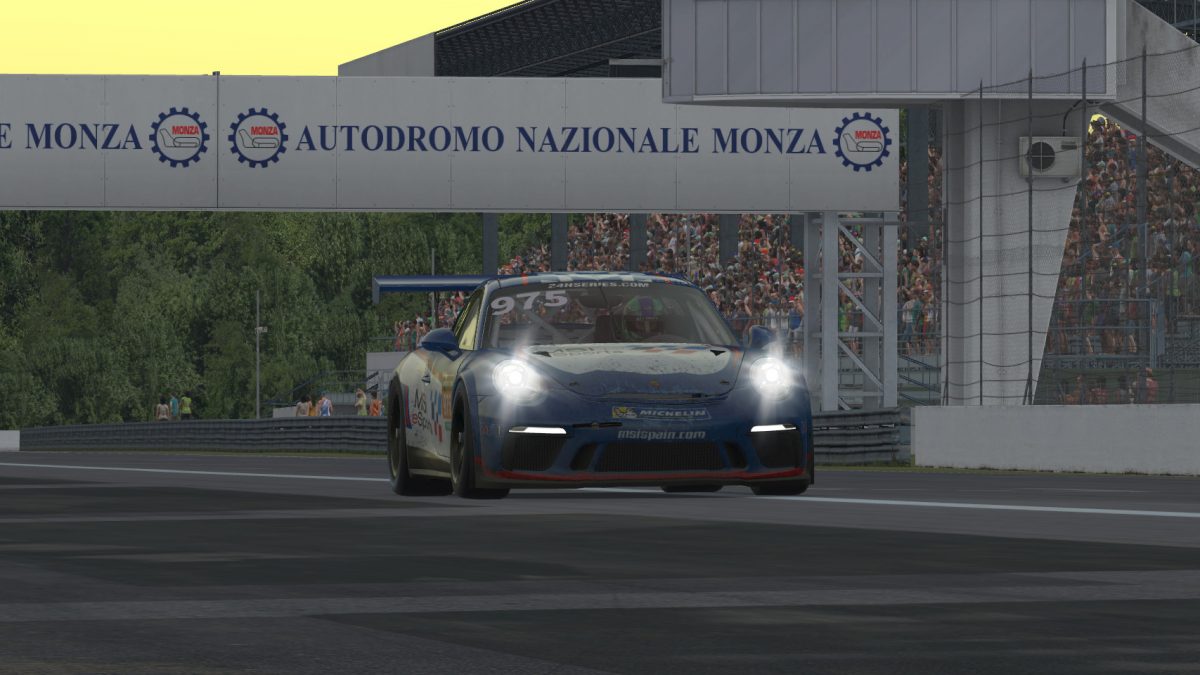 Eleven months ago, MSI eSports must have been the most heartbroken team in the NEO Endurance Series. In the GTE class during NEO season five, they were the model of consistency, reeling off podiums and runner-up finishes.

A win was all that eluded them, and their failure to find victory lane — including in the season-ending 24 Hours of Le Mans — cost them the class championship to Logitech G Altus Esports, whose winning record put them over the top.

This season, MSI entered a team in each class of the 24H SERIES ESPORTS, and with three bullets in the gun, they hoped at least one would hit the target.

As it turns out, their 991 entry hasn’t missed. Not only had they won all four races entering last Sunday’s 6H MONZA, but it hadn’t even been close, with several of their margins best measured by minutes rather than seconds.

At Monza, where drafting seemed likely to play a factor in not just the race but also qualifying, the question was whether MSI’s speed could break the draft and also break through to lock up their first championship.

But it wouldn’t be easy, as their rivals from Burst Esport had steadily gained speed all season and reeled off four straight podiums — the only teams besides MSI to achieve such a feat.

And in qualifying, MSI got their first real challenge of the season thanks to the dynamics of the draft. Dawid Nowakowski from DV1 TRITON Racing hitched a ride in the slipstream of SRN Motorsports and rocketed to the pole with a lap of 1:49.886.

MSI’s Alejandro Sánchez also drafted behind the Williams JIM Esports Cup #908 car for half of his fast lap, but it was only good enough for second place on the starting grid.

That put MSI in an unfamiliar — and potentially hazardous — situation for the start. For the first time this season, they wouldn’t control the 991 field at the start, and with the tight Variante del Rettifilo chicane lurking at the end of the frontstretch, entering in anything but the lead was a risky proposition.

Indeed, trouble awaited several of the frontrunners in those first few corners, but for MSI, a lucky turn of events saw them exit in the lead while their greatest competitors went spinning in their mirrors.

TRITON’s Dawid Nowakowski was early on the brakes into the chicane while Jorge Blasco Valls in Williams JIM’s #991 car dove up the inside — followed by Sánchez — to take the lead.

But on cold tires, Blasco Valls ran wide and clipped the gravel, which sent him sliding back across the track and into the path of Norbert Leitner from HM Engineering and Nowakowski from TRITON.

Those three cars skidded to a halt off the racing surface while the rest of the 991 field raced past. Within the first three corners, Monza looked a lot like the previous races this season — with MSI building a lead while everyone else scrapped behind them.

Emerging from the chicane chaos in second place was Eero Tuominen from Inertia SimRacing, while Robin Östlund from GOTeam Racing climbed from eighth to third.

One team notably missing from the top spots was Burst. A season-long contender inside the top three, Anders Dahl qualified an uncharacteristically low ninth, and a first-lap gearbox problem for teammate Evan Marion sent them into the pits and out of the race early.

Most Porsche teams aren’t used to being so close to MSI at the front, which could explain how Tuominen — running in the tire tracks of Sánchez starting lap 2 — overdrove the first chicane and fell to third.

A new contender entered the top three by the middle of the first stint. Miroslaw Nastalczyk from Chartwell Racing made a rapid rise from tenth on the grid to reach second place by lap 19, and it quickly became apparent that without any issues, Chartwell would be a strong contender to earn a podium.

Their position was solidified the following lap when contact behind them between Östlund and Tuominen in the first chicane damaged the Inertia car, eventually saddled GOTeam with a penalty, and slowed both cars down during the first round of lapping GT3 traffic.

As traffic continued in the first few hours of the race, the 991 midfield behind leaders MSI and Chartwell accordioned back and forth. Both Leitner and Nowakowski were making progress in their drives back toward the front, reaching seventh and eighth positions late in the first stint.

Between them and the three leaders were Colin Duenker from Huber Racing E-Sports, Karl Modig from SRN Motorsports, and Ashley Finch from F4H Racing. However, a mixture of pit strategy decisions would shake up that part of the field even more.

Inertia and HM Engineering each opted to double-stint their tires, while F4H replaced left sides only and other teams changed all four in the hottest part of the race.

The winner in that exchange seemed to be Finch, who had F4H up to third place before handing the #997 car over to teammate William Laster for the middle stints. Just behind them, Leitner held steady in fourth place on old tires.

With Marc Perez behind the wheel, MSI strengthened their grip at the front, at times extending the lead by more than a second per lap over Chartwell’s Rafal Drzaszcz. Another no-tire change for HM during Jordan Weekes’ double stint moved them up to third, while TRITON’s comeback stalled out in seventh with Piotr Jagodzinski in the #999 car.

MSI’s lead was plenty safe late in the race, climbing to nearly two full laps, but they did have a few moments of excitement. With 25 minutes to go, Sánchez climbed the kerb exiting the Variante Ascari chicane to crumple the front end, and with only eight minutes left, a Porsche gaggle entering the first chicane saw the Huber car spin and forced Sánchez to lock the brakes and slide past the sideways #988 car.

But as they did during the first-lap incident, MSI made it through the final one unscathed, and an extra-special prize awaited them.

Along with being their fifth in five races this season, MSI’s victory plus Burst’s early exit and TRITON’s mid-pack performance gave them a mathematical lock on the title, confirming the lock they’ve had on the front of the field all season.

Nastalczyk crossed the line in second after a strong race-long drive for Chartwell, but it turned out to be a bit too strong. Nastalczyk drove one lap more than allowed — 133 compared to the 55 for teammate Rafal Drzaszcz — and exceeded the maximum 70% mark. That proved costly and dropped Chartwell off the podium.

HM Engineering was elevated to second, capping a race-long drive by Leitner, Weekes, and Kieran Harrison to take them from the grass on lap 1 to the podium after lap 188.

They still had to survive an attack from Finch and F4H. The two teams entered Parabolica side-by-side on the final lap, but Harrison exited in front to take the position by two car lengths. However, it was still worth a podium for F4H — their first of the season.

SRN was paced by Modig’s impressive opening double stint in which he recorded the third-fastest median lap time of all drivers, trailing only MSI’s Sánchez and Perez. The #974 car finished in fourth, which was SRN’s best NEO finish since the season-two finale at the Nurburgring — also a fourth-place driving the Corvette C6.R GT1 — almost four full years ago.

Between their early spin and tire strategy that didn’t seem to work out, TRITON wasn’t up to their usual podium-contending ability, but they did pick up a spot over Huber in the final stint to take fifth. That pass dropped Huber to sixth with Inertia in seventh, and after a one-lap penalty was enforced for their driving time violation, Chartwell ended up in eighth.

From there on back, it was a day of frustration for the lower-placed Porsche teams. Although they avoided the lap-1 incident ahead of them, Gold Racing Team fell back down the order when they were collected by one of the Williams JIM cars in the opening laps. Six hours later, they finished in ninth.

TNT Racing was also involved in a pair of early incidents that sent them spinning, and they crossed the line in tenth. Likewise, it was a challenging race for IRDK Endurance, who were running dead last in the class during the first stint and finished in eleventh — the last 991 team classified.

Both Williams JIM cars as well as GOTeam Racing were plagued by crashes and penalties, and they all failed to finish. Burst’s season-long podium streak ended unceremoniously with their early retirement.

Compared to the GT3 and TCR classes, which each came down to door-to-door battles for the victory, the 991 race at Monza was much less thrilling.

But considering that MSI was involved in one of NEO’s most thrilling finishes last season at Le Mans, coming up seconds short of the win and GTE championship, they’ll surely be fine with doing things a less dramatic way this time around.

As frustrating as their season-five loss was, this 24H SERIES ESPORTS championship must be even more sweet for the Porsche powerhouses from MSI eSports.