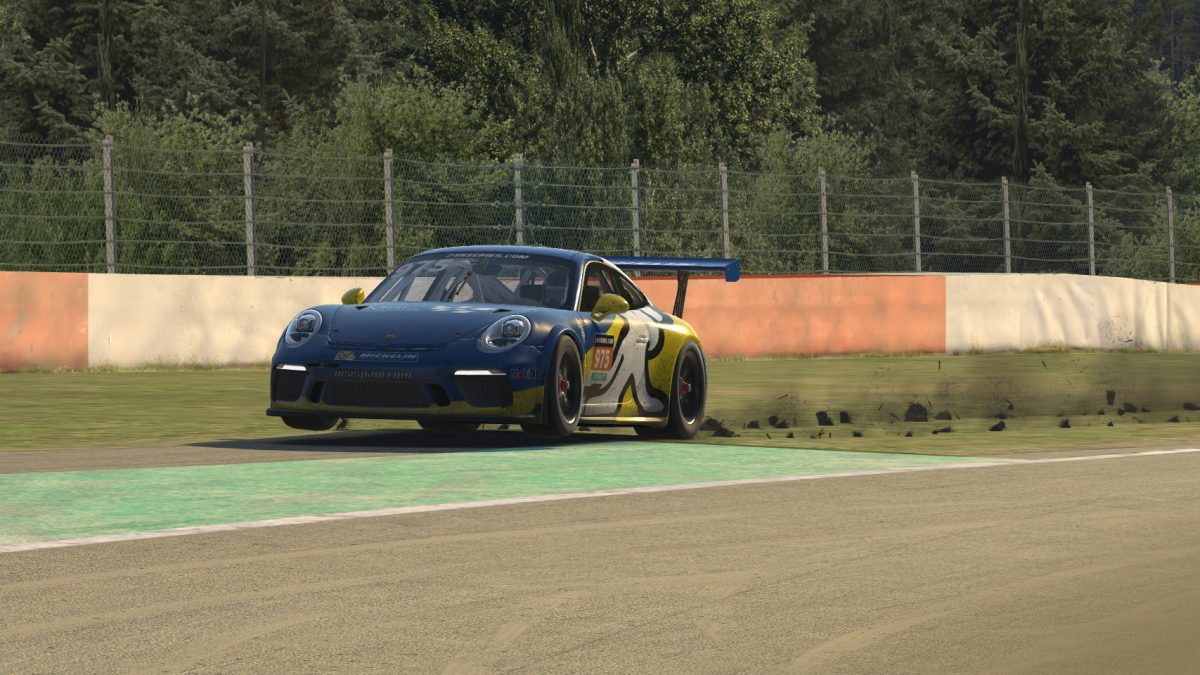 After an off-season that included top-fifteen finishes in the Porsche Esports Supercup and the VRS GT iRacing World Championship, along with their quest to best last season’s narrow championship loss in NEO’s GT class, MSI entered the new season with high expectations.

But even after they took the pole for last Sunday’s opener at Spa and dominated the race, there was a moment of doubt about whether their damaged car would reach victory lane after a close encounter with the unforgiving outside wall at Blanchimont.

Before that late-race drama in the 6H SPA-FRANCORCHAMPS, there was plenty in the early stages as well. It wasn’t a single big crash like in the GT3 class, but there were three smaller incidents that included nearly half of the 991 field.

On lap 2, a late-braking lockup into La Source by F4H Racing sent their Porsche careening into the path of Gold Racing Team, who had a violent end-over-end tumble to start their NEO tenure. SRN Motorsports also caught a piece of the crash and as a result, they suffered a blown engine just one lap later.

There was another braking-zone blunder on lap 5, this one for Williams JIM Esports Cup. Their car went sliding through the inside grass at Les Combes and into the side of Avid Chronic Racing, sending both cars airborne and back to the pits for damage repair.

Just two laps later, more contact occurred at Les Combes. This time, the battle for fourth between Burst Esport and Inertia SimRacing ended with bumper-to-bumper contact and a spin for both cars. They each avoided the severe damage of the earlier incidents, but Inertia did cop a five-second penalty for the incident during their first pit stop.

Among the top three, the early racing was clean but also not too close. MSI’s Alejandro Sánchez began to open up a gap over second-place Alex Arana from Williams JIM Esports Cup M and third-place Dawid Nowakowski from DV1 TRITON Racing.

Matching MSI’s pace would clearly be difficult, so any team hoping to beat them would need to gamble with their strategy or hope for some good luck on their side — and bad luck for MSI.

TRITON tried the former of those during their first pit stop. While the Porsche strategy was fairly straightforward — the race was evenly split into five full-fuel stints — Nowakowski saved time in the pits by not changing tires.

It gave them the lead after the stops, but only for six laps. On fresh tires, Sánchez was closing in by up to two seconds per lap, and he re-took the lead on lap 38, then began opening the gap once again.

Throughout the Porsche field, close fights were tough to come by as the race neared the end of the second hour. MSI was more than 40 seconds ahead of third-place Williams JIM, more than 50 seconds up on Burst, and a minute ahead of Alpinestars Geodesic Racing, who avoided the early crashes to move into the top five from seventh on the starting grid.

They gained another spot when a podium contender bit the dust. On lap 59, Martin Solari’s steering failed in the Williams JIM #908 car. It sent him head-on into the wall at Blanchimont and made them the only 991 team that failed to finish.

While the leaders separated, several mid-field teams began to battle. One of the best back-and-forth fights all race was between IRDK Endurance, which has been in NEO since its beginning, and Huber Racing E-Sports, which was making its first series start at Spa.

Huber’s Dennis Arras-Fabry came from last on the grid to catch seventh-place Marcello Maio for IRDK by the end of the first stint, and a daring pass in traffic entering Eau Rouge helped give the #988 Porsche the position.

In the next stint, Maio got back around Huber’s Colin Duenker, and they swapped spots again near the midway point when Arras-Fabry re-passed IRDK’s Jakob Søndergaard. Chartwell Racing also got into the mix, with Rafal Drzaszcz passing both of his Porsche opponents during his mid-race double stint.

At the edge of the top ten, GOTeam Racing and TNT Racing also staged an entertaining battle that featured side-by-side racing between Henrik Lindoff and Andy Runolfson. Inertia joined the mix as well while recovering from their two avoidable contact penalties.

Indeed, Inertia was the team on the move. After starting eleventh, they entered the top five in the final hour when Chartwell was spun in Stavelot by a TCR. Despite a quick recovery for Drzaszcz with some of his fastest laps of the race coming right after the incident, he couldn’t chase down Eero Tuominen and reclaim the position.

While the fight gave some excitement late in the race, the leaders’ positions all seemed locked in. MSI had a handy lead of more than a minute and a half over TRITON, but on lap 117 with just over an hour remaining, their race nearly ended in disaster.

Marc Perez looked to pass the Torque Freak Racing TCR entering Blanchimont, but James Ewens moved over before Perez was alongside. The miscommunication — ruled a racing incident — saw MSI’s Porsche take to the grass to avoid car contact, but ultimately slap the outside tire barrier in a broadside 130-kph collision.

It looked like a hard enough hit to ruin their car and their race, but they escaped suspension damage and Sánchez brought the car safely to the finish to secure the team’s first NEO race win.

Nowakowski held onto second to ensure both DV1 TRITON teams earned podiums in the NEO season-opener. And after their early spin, Anders Dahl and Evan M. Marion managed a quiet recovery to move Burst into third place at the finish.

Accident avoidance paid off for Geodesic’s Brendan Cronin and Miguel Vigo, who finished fourth in their team’s NEO debut. Behind them, Inertia’s last-stint pass for fifth held up, with Chartwell in sixth and IRDK ending one spot ahead of its race-long rivals from Huber Racing.

After just one race, the 991 class has clear favorite, and it seems that even damage can’t stop MSI eSports from finding victory lane.

Just one season after they kept coming up short — MSI’s GTE team finished season five with five consecutive podiums and three straight runner-up finishes — maybe their luck has finally turned around, or maybe their mastery of the Porsche 911 GT3 Cup car has at least given them a margin for error.

In any case, the pressure keeps building, along with the expectations for more wins and an elusive first NEO championship that appears to be MSI’s to lose.