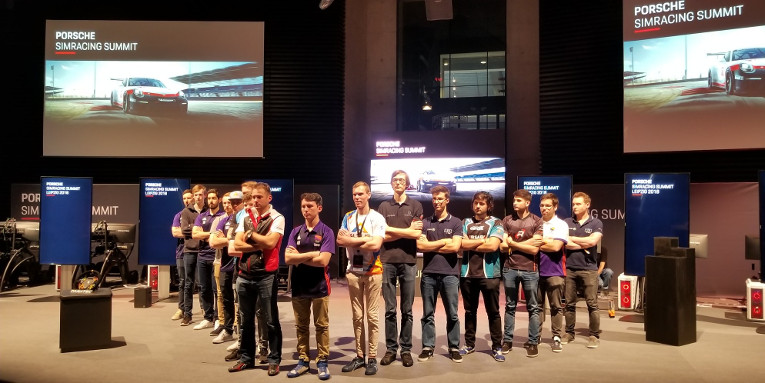 Perhaps they’re making up for lost time, but after years spent as a hermit in the sim racing world, Porsche has spread their love to iRacers with a pair of competitions that seek to find — and reward — the top Porsche drivers on the service.

The first of those was completed last month, when the fastest 15 drivers from each of a pair of time attack challenges held earlier in December were invited to the Porsche SimRacing Summit at the auto maker’s factory in Leipzig, Germany.

The finalists — some of whom turned hundreds or even thousands of laps to put in a quick time — represented an all-star cast of GT sim racers, including a number of current and former NEO competitors.

The event itself offered drivers a chance to test their skills in both real and virtual Porsches. Kahl offered some insights on what the experience was like.

“We were given the opportunity to do some laps on the test track in a couple of different Porsche models and do some car control exercises on the skid-pan,” he said.

“The competition was very unique as we were given very little practice time, and certain aspects of the equipment were configured less than ideally so we had to adapt very quickly to this. However, for an Australian, it was fantastic to be able to race these guys on the same time zone and without a very high ping.”

The virtual event began with qualifying and a series of four 20-minute heat races in the Porsche 911 GT3 Cup cars at Suzuka. The fast-paced event gave participants little time to get up to speed.

“There was only one ten-minute qualifying and a single heat on the Saturday, so it was very high pressure to make it to the finals,” said Kahl. “I had a good qualifying so luckily, I was able to start my heat from second position.”

The top four drivers in each heat made the cut for the Sunday portion of the event. Kahl finished third in his heat behind Joshua Rogers and Nowakowski. Fluke and Sicilia were third and fourth, respectively, in their heat, edging Sánchez, Franczak, and Ferreira.

The remaining 16 drivers then were then paired up for the team competition that included qualifying at Donington; sprint races at Sebring, Road Atlanta, and the Nürburgring; and a 60-minute race featuring a driver change at Spa.

“It was a unique and at the same time challenging task to be paired up with a teammate that you have never raced with before,” said Kahl. “I was with Sebastian Job and since he is English, made that process a lot easier.”

Their pairing started strong, with Kahl qualifying second and Job finishing second in the first race. Although their results then declined — fifth, sixth, and a last-place finish at Spa — Kahl said it was still an incredibly close competition.

“About five of the teams were at some stage looking like they would win the event so it was very much about consistency,” he said.

Former NEO drivers Mitchell deJong and Maximilian Wenig won two of the four Sunday races including the Spa finale to finish first overall and claim €7,500 each.

Among the current NEO competitors, Fluke and Sicilia’s pairing finished in sixth while Kahl and Job’s team tied with Nowakowski and Alexander Voß for seventh place.

Since the Summit overlapped with the most recent NEO round at Interlagos, Kahl and his fellow NEO racers couldn’t take part in that event. However, it was certainly on their minds.

“After the event was over, Dawid, Kamil, and I were actually watching part of the Interlagos race and seeing how our teams were faring,” he said.

As for the weekend in Leipzig, Kahl said it was professionally organized and a blast to participate in.

“The actual event was a fantastic experience and Porsche spent a great deal of effort to make the event so memorable.”

During the SimRacing Summit, Porsche and iRacing announced their next partnership, and it was certainly one that changed the look of iRacing’s highest-level competition.

Beginning in 2019, the new Porsche iRacing World Championship Series featuring the 911 GT3 Cup cars will replace the World Championship Grand Prix Series, contested for the past nine years using a combination of IndyCars and F1 machinery.

Porsche’s involvement means the purse has also increased, with a total of $100,000 in prize money on offer. iRacing staff member Tyler Hudson said the tentative plan is to pay the top 25 drivers in points including $40,000 to the series champion. The podium finishers in each race are likely to take home some cash as well, with potentially $1,000 to each race winner.

Judging by the first week of qualifying that just wrapped up, that pot of money has already proven to be plenty of incentive to get involved.

A total of 641 drivers ran at least one race at Belle Isle, and none fared better than Maximilian Benecke — the defending NEO prototype class champion and the top driver by road iRating. His 393 points led all contenders last week.

Two current NEO competitors currently rank among the top ten in points. Sebastian Dunkel from the Porsche Basel by Sorg Rennsport eSports team picked up 348 points from a 2nd-place finish in the week’s highest strength-of-field race, while Alejandro Sánchez is just behind him in eighth place with 335 points.

The diverse and challenging nine-week schedule for the qualifying series continues at the short Tsukuba Circuit, the technical Twin Ring Motegi east layout, and the high-speed Watkins Glen International track.

The past month has included 10 hours of endurance action for the DGFX Racing League — one of NEO’s feeder series — as it completed the middle two rounds of its six-race season.

The 4 Hours of Barber on December 8 saw a full 60-car field tackle the tight Alabama circuit; however, there were just three full-course caution periods during the race.

Despite their recent run of bad luck in NEO, Wyvern Racing’s DGFX team of Brandon Guarascia and Dallas Pataska scored the overall victory by just over a minute ahead of Bad Cactus Racing and Kinetic Racing.

In the GT Pro class, which will award the series’ final automatic invitation to NEO’s season-ending RaceSpot 24 Hours of Le Mans, the Graphite Racing Ferrari team of Julian Bell and Casper de Kort won ahead of FitzSty and Heusinkveld’s GTE entries.

After a short holiday break, DGFX was on track again last weekend for the 6 Hours of Monza. The battle for two of the class wins came down to a wild final lap. In the P1 class, GTTempel Racing’s Jacob Tofts made it to the finish line on fumes by just 0.8 seconds ahead of Kinetic.

That left the SpeedWerx Racing Team and drivers Jean-Marc Tremblay, Sean McBeth, and Jorge A. Flores with a lucky victory. The LuxSim24 MOATF Podcast Porsche team was second and the Samba Racing Team finished third, while Torque Freak fell to fourth at the checkered flag.

The P2 race had a calmer finish, as Team Heusinkveld cruised to its third consecutive class victory. vApex was second and the current NEO competitors from the RoadBasterds team earned their first podium of the season.

With two races remaining, Kinetic and Heusinkveld each hold a 14-point lead in their respective prototype classes, while Graphite Racing has a 17-point advantage in GT Pro. The series returns to action on February 2 for the 4 Hours of Road Atlanta.

December was a busy month for endurance racing. Along with NEO at Interlagos and DGFX at Barber, a unique-to-iRacing endurance classic returned this year with the sixth running of the Targa Virginia.

Already the most challenging solo endurance race, this year’s Targa added an extra 30 minutes to its daunting distance. Despite the 3.5-hour length, big speed differences between the three classes, and the tricky VIR Grand West circuit often considered a junior version of the Nordschleife, this year’s competitors were up to the task.

Out of the 32 drivers that started the race, 25 were running at the finish. At the top of the final results were four current NEO drivers. Thrustmaster Mivano Racing teammates Anders Dahl and Stefan Muijselaar finished first and second in the C1 class driving the Porsche 911 GT3 Cup car.

NEO’s own lowly web correspondent Corey Davis rounded out the C1 podium, while Team Chimera’s Jamie Wilson finished fourth as the final car on the lead lap. Wilson’s teammate Joshua Chin also competed but was damaged in a crash, dropping him to 10th in class and 25th overall.

Race organizer Dexter Castro told the GSRC commentators after the race that he hopes the event will return next year, but likely with a different car and class lineup, true to the Targa’s tradition.

“I don’t think there’s ever been two years in a row with the same car combination because it’s not mimicking anything,” said Castro, who hinted that a TCR or GT4 car could be in the field if those arrive on iRacing before next December.

The new year means new things on the horizon for the NEO Endurance Series. The first and most visible change was a new-look website that debuted last week. While the content remains the same, it’s now easier to access articles and recent race broadcasts.

At the organizational level, the steward’s room will see a minor shake-up beginning at this weekend’s 6 Hours of Suzuka. The changes come in response to the track-blocking accident less than 30 minutes into the race at Interlagos.

A designated race director will now monitor on-track activity, record incidents and protests, assign stewards, and determine whether a safety car should be issued when one or more cars have stopped on track ahead of oncoming traffic in potential “danger zones” at each circuit.

“We recognized this was one of the reasons the [Interlagos] crash turned into the massive crash,” said series co-founder and director Niel Hekkens. “Coming out of turn 3, the walls are very close to the track, which sent the cars back on the asphalt. At a track like COTA, we think this would have been less of a problem.”

Hekkens added that the safety car would “only be used as a last resort” in those particularly dangerous, track-blocking situations.

Looking further down the road, Hekkens said he hopes NEO’s season six will include some new infrastructure to make life easier both for teams and administrators.

“I expect to see a new attempt to create a platform where team managers can manage their teams, entries, and rosters.”

Those teams are also looking forward to 2019. In our recent Roundtable Discussion, representatives from several teams shared their New Year’s resolutions for the second half of the season, which begins at Suzuka.

In addition to the 36 hours of NEO competition remaining in season five and the ongoing World Championship qualifying series, the 2019 iRacing special event schedule kicks off with this weekend’s Roar Before the 24. That means plenty of racing — and some big paydays — in the months ahead.