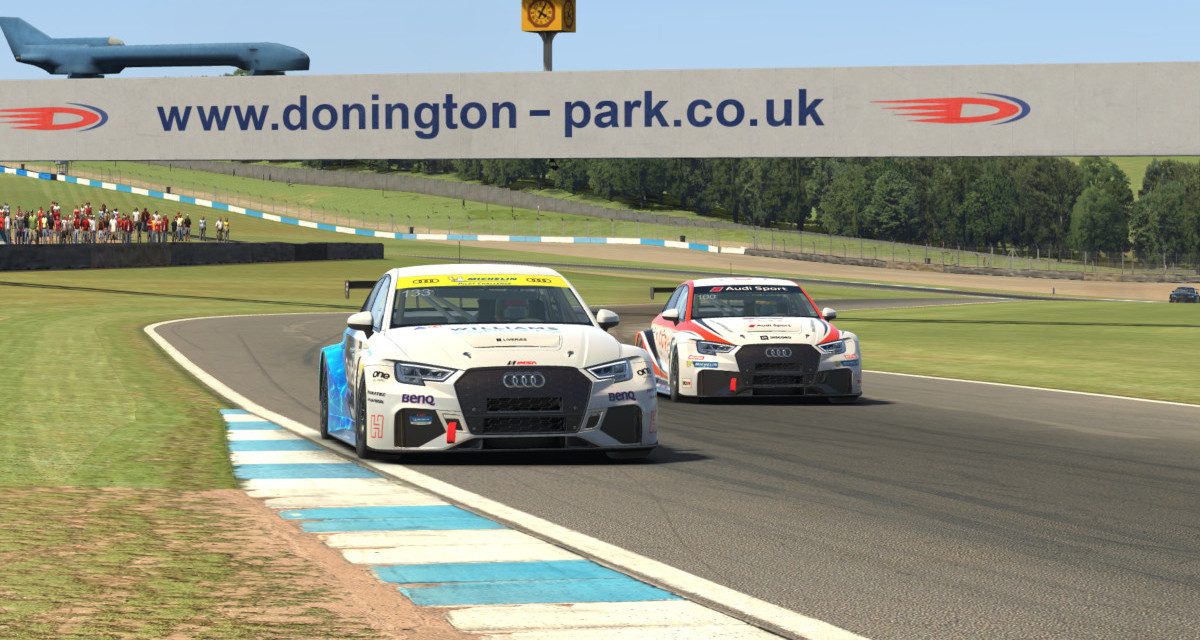 A record number of entries contested last weekend’s pre-qualifying event for the upcoming 24H SERIES ESPORTS season, and after eight hours of opportunities to set fast times, the margins between making the field and not were razor thin in all three classes.

A total of 80 teams showed up on Sunday at the virtual Donington Park circuit vying for 34 available grid spots. As expected, the competition was close, and while some big names made the cut, several also got left out.

In the GT3 class, Audis showed the way, as the top six teams all campaigned the R8 LMS. The fastest team average of a 1:26.159 was set by the Biela Racing Team EURONICS duo of Sven Haase and Lukas Jestädt. It’s the second season in a row that the German team has topped their class in pre-qualifying after the #85 Porsche 911 RSR led the GTE field last year.

Other returning teams who secured their season ticket in pre-qualifying include MSI Esports and Williams JIM Esports, who posted the second and third fastest times in the GT3 class. Sorg Rennsport eSports was sixth in class with a lineup featuring one driver from last season’s P1 team (Mike Nürnberg) and another from their GTE effort (Patrick Baaden).

Fourth through sixth positions were separated by just 0.006 seconds of average lap time. Finishing fourth was SRC Squadra Corse with Marco Gabriele Nesi and Emanuele Petri driving, while Williams Esports was fifth with their tandem of Kay Kaschube and Dominic Staib.

The highest-placed Mercedes AMG GT3 belonged to the Privateers of Vincenzo Amico and Filip Mitrevski in seventh. They edged out the Audis of Team RSO and Phoenix Racing eSport.

The tenth and final team to earn a grid slot in the GT3 class was Huber Racing E-Sports in their Mercedes. Both Michael Drechsler and Anton Steiner put up quick laps in the final session of the day to improve their standing.

They edged out Torque Freak Racing by just 0.020 seconds, as Antti Salminen couldn’t outpace Huber’s duo in the final hour of pre-qualifying. Despite finishing only 0.366 seconds behind first place, the Torque Freak veterans missed the grid, proving how fast and closely matched the GT3 field is this season.

Other teams outside the top ten in the GT3 class include GermanSimRacing.de, a pair of entries from SIMMSA ISR, and Slo-Racing eSports, whose second attempt at making the NEO grid ended the same way as their first — on the reserve list.

There was little doubt that Burst Esport would make the grid given their talented lineup with plenty of NEO experience, and true to form, they led the way for the Porsche 911 GT3 Cup field in pre-qualifying.

While neither of their drivers set the fastest 10-lap average of the day, both Harrison Finch and Anders Dahl managed fast and consistent runs to post the top team average of a 1:30.161.

The Finnish foxes from Inertia SimRacing were second quickest, followed by DV1 TRITON Racing, whose 991 team joins their already-registered GT3 team on this season’s grid.

The fastest individual 10-lap run in the Porsche belonged to Alex Arana, who recorded an impressive 1:29.976 average time in the final session to ensure the Williams JIM Esports Cup M team made the field. He and teammate Martin Solari combined for the fourth-fastest team average, while their teammates Guillem Escuder and Daniel Cruz were sixth-quickest to get a second Williams JIM team in the 991 class.

A strong showing by Miguel Vigo and Brendan Cronin put Alpinestars Geodesic Racing into the NEO field for the first time, while Avid Chronic Racing and Chartwell Racing will also debut this season.

William Laster and Ashley Finch from F4H Racing posted the ninth-fastest team average in the final session, and they were the only of F4H’s three entries to make it through pre-qualifying.

As in the GT3 class, the final grid slot in the 991 class went to Huber Racing E-sports thanks to clutch final-session efforts by Dennis Arras-Fabry and Sven Brueckner.

The biggest surprise in the Porsches was the first team to miss the grid. SuperSport Racing entered with a talent-loaded lineup, including part of their COTA-winning C-Spec team from season 1, but Gresham Wagner struggled to string ten clean laps together or match teammate Braden Eves’ pace in the closing minutes of the day.

We expected that experience might not matter too much in the Audi RS 3 LMS car given that it had been on the iRacing service for less than two weeks when teams hit the track in pre-qualifying. The top TCR team proved that, as Prologue React E-sport was only formed earlier this summer but had class-leading pace with their lineup of Lasse Bak and Mikkel Gade.

ASTRO Gaming Altus Esports easily managed to get a second team on the grid with a second-place effort in pre-qualifying by Andrew Kahl and Alexander Lauritzen. They were followed by the veteran pairing of Simeon Lynch and Jack Sedgwick from CraigSetupShop.

Their names may not yet be familiar in the NEO world, but RaceKraft Engineering’s pairing of Kane Halliburton and Brian Lockwood have plenty of iRacing — and real-world racing — experience, and it showed in their fourth-place result in the TCR class.

A foursome of NEO veterans followed them in the final standings. CoRe SimRacing, Vendaval Simracing, MSI eSports, and Team Chimera all made the field and were separated by just under one tenth of a second.

Newcomers Dimitri De Matos and Thomas Gerstenberg from Satellite Racing TCR will also join this season’s grid, along with the second entry from Alpinestars Geodesic Racing paced in pre-qualifying by Nathan Lewis and Dominic Ollivierre.

The eleventh and final TCR team advancing to the 51-car field this season was Williams Esports, whose talented pairing of Andre Böttcher and Nils Koch had to sweat out some last-session efforts to unseat them.

Those included runs by Race4CAT Motorsport, whose team average was 0.073 seconds slower than Williams and left them in the first reserve position, and Odox Motorsport, who were fourteenth fastest.

For the teams that advanced out of pre-qualifying, it was only their first challenge as they now prepare to join last year’s top teams for the six-race, 42-hour 24H SERIES ESPORTS season.

And for those that missed the grid, at least they had plenty of company, as 46 total teams tried but came up short last Sunday.

While the new classes and teams make it tough to predict exactly how this season’s racing will look, based on pre-qualifying, we can already say this may be the most competitive NEO season yet from top to bottom.