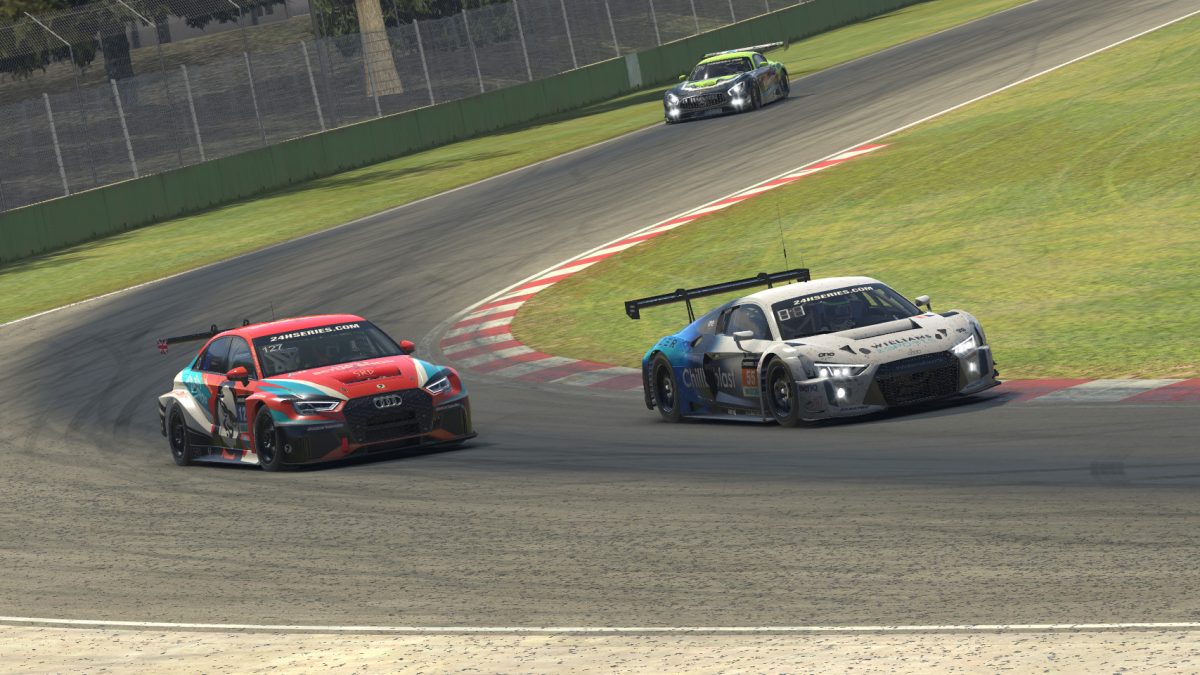 A brand new year brought the same old results atop the 24H SERIES ESPORTS leaderboard, as each class had a repeat winner in Sunday’s 6H IMOLA.

However, new faces found the bottom steps of the podium in a race around the bullring on this season’s schedule.

The overall winners from round two at COTA, Williams Esports, took the pole position and the GT3 class victory at Imola after leading the most laps, but it was far from a sure thing entering the final hour.

Laurin Heinrich had less than a six-second lead over Sven Haase from Biela Racing Team EURONICS, and both teams were under investigation by the stewards.

Ultimately, Biela’s #45 Audi R8 LMS was penalized during its final pit stop for forcing the ASTRO Gaming Altus Esports TCR off the track.

Meanwhile, Williams escaped a penalty for contact with the CoRe SimRacing TCR exiting Villeneuve corner after CoRe took the blame for their on-track miscommunication.

While their positions remained the same, Williams’ lead grew to 40 seconds, and rather than enduring another late-race duel with Biela like they faced at COTA, Williams cruised to the win — a cause for both celebration and a sigh of relief for Heinrich and Kay Kaschube as they returned to victory lane and extended their GT3-class points lead.

Biela’s Haase and Lukas Jestädt finished second and Leo Racing Team performed at their best in the first of two home-country races for the team, with Dino Lombardi and Alessandro Bico coming home in third as the final car on the lead lap.

There was no surprise in the 991 class results, as MSI eSports put together another unstoppable showing. This time, Alejandro Sánchez and Salva Talens combined to secure the team’s fourth consecutive victory.

Despite a mid-race slide into Rivazza for Burst Esport that ended in contact with the Team Chimera TCR and a stop-and-hold penalty, the #991 team of Anders Dahl and Harrison Finch held onto second place, equaling their season-best finish from COTA.

Burst had a full lap lead over the third-place Williams JIM Esports Cup #991 team, whose Daniel Cruz and Jorge Blasco Valls stood on the podium for the first time this season.

The TCR class also saw its points leader remained undefeated. CraigSetupShop is now four-for-four after Jack Sedgwick and Simeon Lynch added an Imola win to their accomplishments this season.

While the gaps behind them ballooned late in the race, they were stuck in a close three-way battle for the lead early on. However, unscheduled pit stops for CoRe dropped them outside the top ten, and several instances of contact with faster-class cars cost SimRC time and put them in second at the finish.

Continuing the theme of podium breakthroughs in each class, Apex Racing Team held off a late challenge from Altus to earn a season-best third place finish for Jamie Fluke and Alex Simpson.

While there wasn’t as much attrition as some expected, there was still a bit of car-on-car contact around the shortest and narrowest circuit on this season’s schedule. Throughout the field, speed, survival, and the scorn — or mercy — of the stewards were all factors in deciding the outcome.

Stay tuned to neo-endurance.com in the coming weeks for additional coverage of the 6H IMOLA, including team and driver insights and class-by-class race recaps.