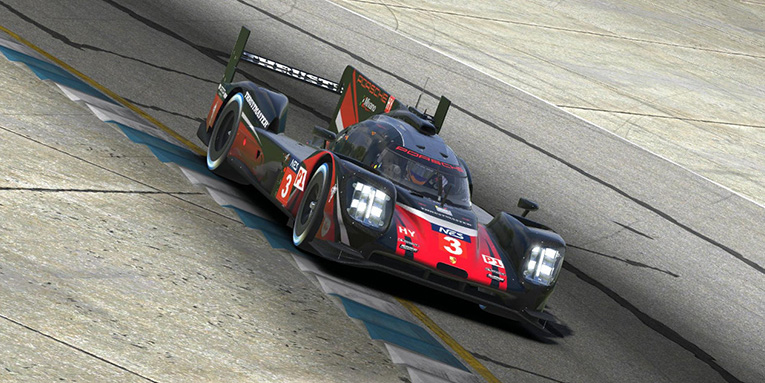 After months of practice, preparation, and uncertainty for P1 teams ahead of the class’s first race on the NEO grid, it was clear that one team had done its homework in the hybrids as they put in a dominant two-car performance during the NEO Endurance Series season opener.

From the opening of Saturday’s first free practice session, Thrustmaster Mivano Racing was the team to beat. The only question, it seemed, was which of their two entries — the #3 Porsche 919 driven by Marcus Hamilton and Tommaso Carlà, or the #4 of Maxime Brient, Ashley Owen, and Will Tregurtha — would come out on top.

The #4 car had the edge in that first practice, but on Sunday, the advantage swung back to their teammates. The #3 entry topped the warm-up session, set a blistering qualifying lap of 1:38.452 seconds — a 136.76 mph average around the Sebring International Raceway — and led the field to the green flag.

Early on, Mivano’s greatest rival entering the season threatened to break their stranglehold on the P1 class. SimRC.de vaulted from third on the grid to take the race lead on lap 5, but as they worked through traffic for the first time, Hamilton put Mivano back in front again two laps later.

Throughout the hectic first stint, a group of 4 “M”-pressive drivers — Mivano’s Marcus Hamilton and Maxime Brient, SimRC’s Michael Mittner, and Porsche Basel powered by Sorg eSports’ Mike Nürnberg — pulled away at the front of the field.

After the first round of pit stops, Nürnberg even took the race lead. However, he was racing while under investigation by the stewards for early contact with the Wyvern Racing #25 car and was eventually assessed a stop-and-hold penalty for the incident. That dropped the pre-qualifying race winners from Sorg down to eighth in the running order.

Several teams in the back half of the P1 field encountered problems within the first hour or so. Team Chimera’s Joshua Chin cut a three-wide pass a bit too close to the Corvette bridge on lap 15, putting their Porsche into the wall and onto the wrecker after just 15 laps.

Both of the UI1-Positive SimRacing entries also suffered early contact. Their #27 entry nosed into the turn-two tire barrier on lap 44, while their #28 car had a pair of run-ins with the #83 Altus Esports Porsche, the latter of which occurred just as Daniel Benefield exited the pits.

While that round of pit stops spelled disaster for one P1 team, it was a turning point in the race for Mivano’s race-leading #3 team. After Carlà climbed behind the wheel, he opened a lead of 14 seconds to SimRC’s Claudius Wied in just one stint.

By the time he handed the car back over to Hamilton, their lead over teammate Tregurtha in the #4 car was more than 20 seconds. It was a gap they would largely maintain until the finish.

Along with the pole and the race win, Hamilton captured the fastest lap of the race with a 1:40.953 just after the halfway mark when the air temperature on a sunny Florida afternoon dropped by a degree or two.

With their #4 team in second place, Mivano also swept the top two spots on the podium. Their biggest rival was effectively eliminated with 60 laps to go, when SimRC exited the pits and immediately came together with the TRITON Racing GT car. That forced Mittner back into the pit lane for extended damage repair and elevated Sorg to third position after a race-long battle back from their early penalty.

The teams fighting just outside the podium places found themselves in some close battles in the last hour of racing. Race Clutch, which had held fourth place since SimRC’s crash, lost that spot to Odox Motorsport Samsung during the final round of pit stops. However, a last-lap pass by Race Clutch’s Luis Rodriguez on Hugo Preto put them back to P4 in the final seconds.

Along with Sorg, Race Clutch, and Odox, the Wyvern Racing team finished one lap down, coming home in sixth. A strong fourth-place qualifying performance by Sai Andra put them within a half-second of the pole, but their race was stunted by two extra trips down the pit lane — one to serve a penalty for unjustifiable risk while passing a GT car, and another for excessive off-tracks.

Other than seventh-place MSI esports, the rest of the P1 top ten included three more teams who had to fight back from penalties. AVA Vervatic, SimRC, and F4H Motorsport were each handed stop-and-hold penalties for contact, while F4H’s rocky NEO debut also featured a drive-through for exceeding track limits.

Another team making its first NEO start was VRTeRacing. Despite being the sixth-fastest team based on best laps in the race — their quick time of 1:41.538 belonged to Ismail Yakubu — they couldn’t seem to find as much consistency in traffic as the top ten finishers, which landed them in eleventh. One lap behind them were Torrent Motorsports and the UI1-Positive Sim Racing #28 car.

The race got off to a rough start for SimatoK eSport, as Julien Ribouleau locked up under braking for Tower corner on lap 6 and collected VRT and the Torque Freak Racing Porsche. After an unscheduled pit stop and a penalty within the first hour, their recovery drive ended in a disappointing fourteenth position.

This season’s lone Audi of Virtual Motorsport also suffered contact at the midway point of the race in a three-wide pass attempt gone wrong. Although they appeared to be on their way to a top-ten finish, the crash ended their chances and forced them to limp their damaged car home nine laps down in fifteenth.

The final two finishers — Chimera and the Positive SimRacing #27 team — also had damage and ultimately, races to forget in their initial P1 outing.

For those teams that struggled with contact or penalties — and seven of the eleven penalties for causing a collision, and all three for excessive track limit violations were to P1 teams — they have a clear example to follow. Mivano’s race-winning entry made negotiating traffic and the boundaries of the Sebring circuit look easy, recording just eight off-tracks all race.

Of course, as this race proved, just keeping up with Mivano long enough to imitate them will be a tough task this season.