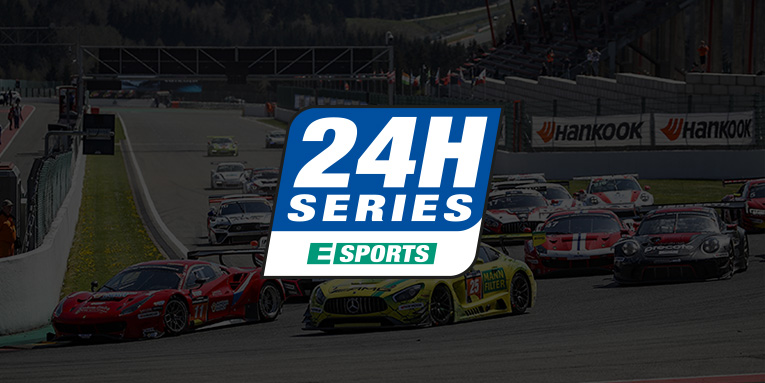 As the longest-running endurance league on iRacing, the NEO Endurance Series has made a name for itself over the past five years.

Beginning this fall, it’s about to get a new name and a new structure as NEO continues to lead the way in the world of sim-racing esports.

In a partnership with CREVENTIC, the organizer of the 24H SERIES of global endurance racing, the sixth season of NEO competition will be branded as 24H SERIES ESPORTS and will include an updated class structure and schedule to better align with the real-world race series.

The schedule will remain at six races and visit a combination of new and returning tracks for NEO. After beginning the season at Spa and COTA, the series will travel to Silverstone, Imola, Monza, and finish the season with a 12-hour race in Barcelona.

And as part of the new partnership, NEO and CREVENTIC will offer prize money to the top five teams in each class as well as trophies and potentially other prizes that would help recognize the esports championship’s top teams at the real-world 24H SERIES’ events and venues.

It’s all part of an esports integration for the 24H SERIES that makes logical sense, according to Koen Wiesman with CREVENTIC, the Netherlands-based motorsports organizing body that since 2005 has organized worldwide endurance races such as the 24H DUBAI and 24H BARCELONA.

“In a world where everything is becoming more and more digital, companies have to keep up with the developments,” said Wiesman. “Because the fan base for esports is big and continually growing, esports is the perfect way to unlock a new, younger fan base and get these fans interested in real-life motorsport as well.”

So why NEO and why now? Both Wiesman and NEO co-founder Niel Hekkens said their organizations had many shared values that made entering this partnership an easy decision.

“Like the 24H SERIES, NEO Endurance focuses on the quality of their races instead of the commercial aspect of it,” said Wiesman. “Fun is most important, and accessibility for everyone is one of the key elements in the 24H SERIES as well.”

“As a league, we want to be as accessible as possible,” added Hekkens. “The 24H SERIES is an accessible series as well. Do you have a car? You are able to join one of their events.”

As an organizer, CREVENTIC boasts “high-quality, professional service alongside a welcoming, approachable atmosphere in its paddocks” where “team spirit, fair racing, and actively enjoyable competition with an international flair are our bread and butter”.

Given the high level of competition, friendly camaraderie, and global representation within the NEO Endurance Series paddock, it’s safe to say those aspects of the series are a few things that won’t change in this new season.

The biggest change for teams and drivers to adjust to will certainly be the new classes. Out are the prototypes and GTE cars from recent NEO seasons, and in are three of the classes that contest the real-world 24H SERIES races.

Modeled after the GT3 class, the leading class will be an all-GT3 affair including the Audi R8 LMS, the BMW Z4, the Ferrari 488, and the Mercedes AMG. It will be the second appearance for GT3 cars on the NEO grid after the Audi and Mercedes comprised the GTS class in season three.

As in the real-world 24H SERIES, the 991 class will be a single-make competition for Porsche 911 GT3 Cup cars. The Porsche’s iRacing predecessor, the Ruf C-Spec, was part of NEO’s very first season, so the new lineup is a bit of a throwback to NEO’s roots.

The TCR class will also feature a single manufacturer this season with the highly anticipated Audi RS3 LMS car. In this season’s 24H SERIES, the Audi of AC Motorsport has notched a pair of second-place finishes so far at Mugello and Portimão, giving the virtual version of the car a successful pedigree as it joins the service later this summer.

Wiesman said these three classes give a good sampling of the 24H SERIES lineup, which at times reaches nine classes when including professional and amateur divisions.

“Our GT3, 991 and TCR classes are some of the most competitive in our series, because they represent the top sector of both the GT and TCE division,” he said. “Previous editions of the esports series organized by NEO Endurance showed that interest and competition in these classes is promising, so of course we expect these classes will be competitive in the new 24H SERIES esports championship as well.”

According to Hekkens, the announcement of the Audi TCR was the final piece of the puzzle to securing this partnership. After months of discussion with CREVENTIC, both sides were able to agree to a deal in this most recent off-season.

“CREVENTIC showed interest in the proposal and the ball got rolling fast. It also helped that we built a solid foundation over the years with NES,” said Hekkens. “It is a case of various pieces falling into place that made it the right time for this partnership. The decisive moment is the anticipation of the Audi TCR car.”

A total of 48 teams will be split among these three classes, with additional invited entries from NEO’s partner leagues including the CVR, DGFX, and OEC championships added to the grid for the season finale.

The top finishers from each class last season will be invited to join the class of their choice, although Hekkens said there may be limits to avoid too many teams joining the same class.

The new classes are an admitted departure from the WEC style that NEO has historically mimicked, but with many other official and hosted championships adopting that prototype and GT format, Hekkens sees the new structure as a chance for NEO to again distinguish itself.

If the real-world 24H SERIES is any indication, the switch to GT and touring cars should make for extremely close racing among an already closely matched grid of sim racers.

The schedule also gets a shakeup this season, splitting the six races among a mixture of classic NEO circuits and new venues that will be familiar to 24H SERIES viewers and competitors.

The pre-season is headlined once again by pre-qualifying on September 15, but this time, it will move across the British countryside from Silverstone to Donington Park. The short, technical track with a variety of slow, medium-speed, and fast corners will be a serious test for this season’s new cars and drivers.

The season itself begins on October 13 with a visit to the Circuit de Spa-Francorchamps, which will keep its streak alive of being a part of every NEO season. The six-hour NEO opener will come just one week after the TCR Spa 500, which is a joint effort between CREVENTIC and TCR pioneers WSC.

The Circuit of the Americas also returns to the NEO calendar to host round two on November 10, the week after the 24H SERIES visits the Texas track for its season-ending 24-hour race.

On December 15, the esports series will visit the Silverstone Circuit, and unlike past seasons in which it hosted the pre-qualifying events, teams will be competing for championship points in this first trip to the current grand prix layout.

The season will resume after the start of the new year with NEO’s first visit to the Autodromo Enzo e Dino Ferrari. The Imola circuit, which hosted the real-world 24H SERIES in May of 2018, will invite the 24H SERIES esports championship for a six-hour event on January 5.

The championship will remain in Italy for the last of five six-hour races on February 2 at the Autodromo Nazionale Monza. It will be NEO’s second race at Monza and the first since season two in 2016.

The season will end on March 21 at the Circuit de Barcelona-Catalunya, which is expected to be released on iRacing this fall. That 12-hour race — a shorter version of the real-world 24H BARCELONA — will decide the champions in all three classes.

All races will be streamed live on the iRacing eSports Network, continuing a partnership with RaceSpot, who will provide the same level of broadcast and commentary quality that NEO competitors and fans have grown accustomed to.

Other details for the new season are still being finalized and should be released in the weeks to come.

These include the full regulations, which Hekkens said should mostly stay the same. For instance, the Code 60 procedure, which was an innovation introduced by CREVENTIC, won’t be used by NEO this season, but the penalty matrix may be updated to better match the officiating guidelines from the 24H SERIES.

Registration information for invited teams and pre-qualifying entrants, who have just over a month to prepare before hitting the virtual track at Donington, will also be coming shortly.

And there may be a few more surprise announcements forthcoming as well.

Beyond even this season, both NEO and CREVENTIC are hopeful for a continuing partnership that is beneficial to both groups.

“This partnership allows us to learn from each other,” said Hekkens. “As NEO, we can learn a lot from a professional organizing body, while CREVENTIC gets to learn about the possibilities in sim racing.”

From CREVENTIC’s perspective, this season could be only the first step in an ongoing global esports series running alongside the 24H SERIES races.

“We hope to create an entire championship one day, with a calendar that is synchronized to our real-life events,” said Wiesman. “Of course, it would be great to incorporate some of the virtual events in our live events, to give an extra layer to the event for participants, fans, and partners.

“As this is our first year in esports, we would like to get the ball rolling and see how everything works out, so we can improve year after year.”

That ball starts moving now, and with the season starting soon and two eager organizers ready to keep up their momentum, it’s full speed ahead for the 24H SERIES esports championship!