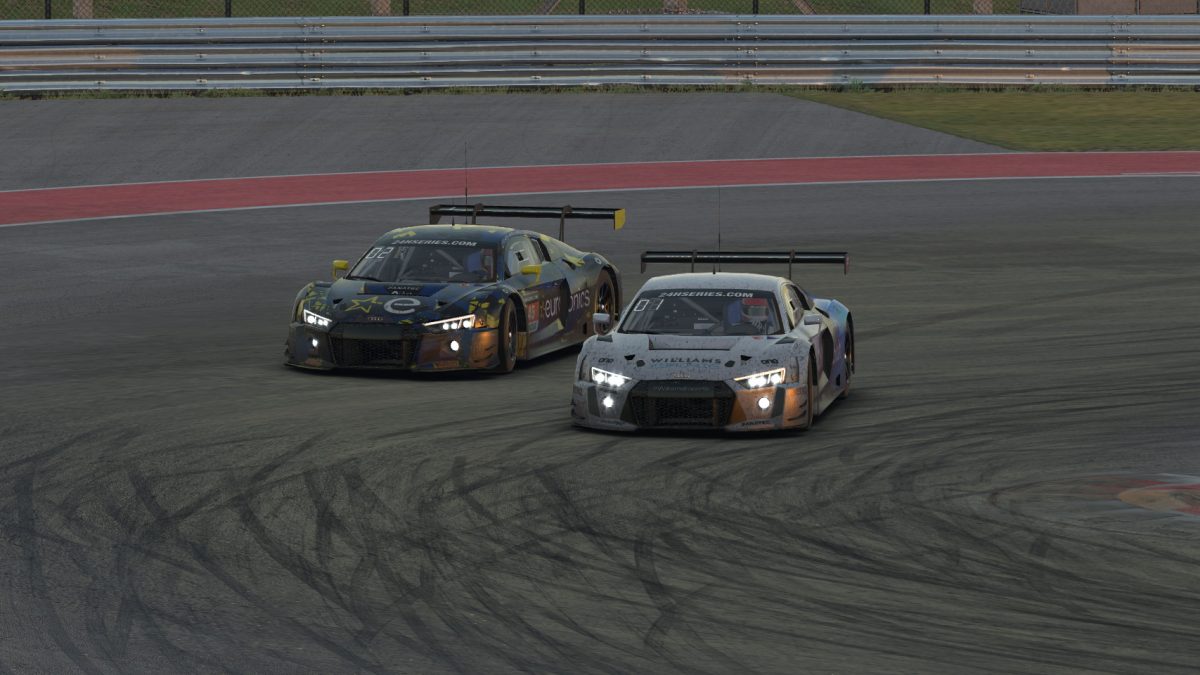 Last Sunday’s 24H SERIES ESPORTS round at Circuit of the Americas had everything you’d expect from a wild west battle in the GT3 class: dueling drivers, shots fired, and a few outlaws facing the long arm of the law after the dust had settled from their six-hour showdown.

The tricky circuit combined with slower traffic and plenty of hungry drivers made it a challenging race where contact was almost inevitable, especially in the final laps as some of the top positions remained closely contested.

As at Spa, the front of the field again saw a tight race between Biela Racing Team EURONICS and Williams Esports. Biela’s #45 team picked up where it left off in round one, with Lukas Jestädt edging Williams’ Kay Kaschube by just 0.072 seconds in qualifying to earn the pole position.

Jestädt led throughout the first stint, including the treacherous early trips through traffic, but he couldn’t shake Kaschube, who was less than half a second back when pit stops began.

That cycle of stops brought the race’s first lead change, as Kaschube stayed out for two extra laps and ultimately emerged ahead of Jestädt, who spent his outlap stuck in heavy traffic.

What started as a seven-second lead grew to nearly ten by the end of the stint, and then a driver change saw Dominik Staib for Williams and Julien Grünastel for Biela pick up where their teammates had left off: nearly matching each others’ lap times as they negotiated a hot track and the slower 991 and TCR classes.

In the final two hours, the starting drivers were back behind the wheel. Despite a slower final pit stop, Jestädt manage to chase down Kaschube and get the gap to under a second in the last stint.

With ten laps to go, the two battled side by side down the backstretch and into turn 12, but Kaschube prevailed while Jestädt  was left to regroup and plot another attack.

Six laps later, he took aim and fired. Kaschube took a compromised line into the turn-12 braking zone while passing the TCR leader, and Jestädt tried an outbraking maneuver from five carlengths back that resulted in contact.

Kaschube’s #55 Audi R8 skidded off the track and Jestädt relented, giving back the position and avoiding a penalty. However, the damage cost Jestädt a chance to catch up once again, and the two crossed the finish line 3.6 seconds apart, with Williams winning and Biela finishing second.

The fight for third place was also a contentious one nearly all race. After starting third, Mivano Simracing Team made it farther than they did at Spa — past the first corner — but it was still a rocky first stint for Luc van Schaik, falling as far as tenth place.

It was enough to make Mivano call for an early pit stop, putting Tommaso Carlà behind the wheel after just 24 laps. In his next stint, Carlà climbed back to fourth and Racim Fezoui reclaimed third place for Mivano before the midway point of the race.

Their main challengers for the position were Sorg Rennsport eSports and Williams JIM Esports, who each had their own adventure of a race en route to podium contention.

Sorg’s Mike Nürnberg started fifth and held a steady top-five position, but the team’s strategy to run the fuel tank dry each stint meant he led four laps before handing over to Philipp Südbeck for the middle stints.

Their race-long fuel stretching meant the team had a shorter final pit stop, and Nürnberg found himself third in the closing laps, but with pressure from Carlà right behind.

With six laps to go, Carlà had a run up the inside in turn 1, but as the two raced door-to-door into the esses, they made contact and spun — Mivano into the wall and Sorg into the path of Huber Racing E-sports’ #88 Mercedes AMG GT3.

The pair of pinball-like collisions spelled the end of the race for Sorg while Carlà limped Mivano’s Merc home, eventually classified in fifth place after a 30-second post-race penalty for the contact with Sorg.

The main benefactor was Williams JIM, who was lurking just a second behind the battling pair at the time of the incident. The #21 team used an impressive drive by Aldo Massa in the early laps to climb from sixth to third, and Moreno Sirica kept them in the top five during his three stints, including the final one.

While they couldn’t match Carlà’s late-race speed or Sorg’s shorter final pit stop, Williams JIM had one ability that some teams thirsted for on the hot Texas afternoon: survival. And it helped them secure a podium once the checkered flag waved.

The rest of the GT3 field didn’t have quite the same amount of drama in the closing laps, but there were still some close fights as well as some tough breaks all race long.

Prior to COTA, the Privateers traded their plain white livery for a much less incognito orange one as part of their new affiliation with Ronin SimSport.

Following Sorg’s strategy of stretching their first five stints as long as possible, Ronin’s drivers Filip Mitrevski and Andreas Jochimsen each enjoyed a few laps in the race lead. But after being swarmed by the train of Sorg, Mivano, and Williams JIM, they found themselves in sixth following their final pit stop.

Sorg’s late-race exit moved them up one spot and Mivano’s penalty earned them another. After all was said and done, Ronin had backed up their fourth-place finish at Spa with another at COTA, establishing them as one of the most consistent performers early in the season.

SRC Squadra Corse ran in third place in the opening laps, but by the second stint, Massimo Carbognani had settled into a fight for seventh with MSI Esports’ Álex Ardisana. The two teams were nearly inseparable all race, and they waged another exciting GT3 battle to the checkered flag.

On the final lap, Emanuele Petri held off a hard-charging Ardisana, crossing the line a nose ahead of the MSI Audi. However, their own penalty for late-race contact with Sorg’s TCR car cost them the position, putting MSI in sixth and SRC in seventh for their first NEO points finish.

Among the midfield runners, Team Heusinkveld managed a race of survival to finish eighth. Phoenix Racing eSport was another GT3 team to adopt a strategy of running long early to make a shorter final pit stop, and it nearly earned them an extra position.

After taking a splash of fuel with ten laps to go, Tim Matzke exited the pits three seconds behind Team Heusinkveld but was unable to close the gap — or get within diving distance, as was custom in this race — by the finish.

In the always important quest for track position, S2V Racing tried the opposite sort of strategy — taking less fuel in their first pit stop to jump some of their mid-pack opponents. At the time, it worked well, as Ricardo Silva climbed from twelfth to seventh, but the remaining five hours of racing sifted S2V back down the order to their tenth-place finishing position.

Despite qualifying just a second off the pole-winning lap time, Virtual Motorsport started seventeenth out of the eighteen-car GT3 field. Their lack of speed in the Audi R8 LMS kept them toward the back of the field for most of the race.

However, drivers Dennis Gerressen, Bas Slob, and Michael Storm did what they’ve become known for over the years in NEO — getting their car to the end and bringing home a handful of points for eleventh place on a day when they otherwise didn’t have the pace for such a finish.

Team RSO also started toward the back in sixteenth but by mid-race had worked themselves into a close three-way battle for eleventh with Phoenix and Huber. While RSO eventually lost contact with that pair, they picked up twelfth place in the final laps after Huber’s crash.

A thirteenth-place finish doesn’t even begin to capture the story of LEO Racing Team’s wild ride at COTA. They were the biggest mover in the first stint, Dino Lombardi climbing from fifteenth to seventh. However, a crash with Biela’s #46 car in the next hour earned LEO a 45-second stop-and-hold penalty that sent them to the back of the pack again, and from there, they could recover only to thirteenth.

Biela’s crash-damaged #46 team ended up in fourteenth, while Sorg earned the final point in class after finishing five laps down. A late crash and subsequent post-race penalty dropped Huber out of the points and into sixteenth.

DV1 TRITON Racing couldn’t match their third-place pace from Spa, and instead, they were involved in one of the craziest crashes of the day, flipping over in the turn-19 gravel trap after contact with a Porsche 911 GT3 Cup car midway through the race.

Logitech G Altus Esports also failed to finish after they were collected in an early crash while lapping the 991 and TCR fields.

For some GT3 teams, this season has been almost a non-starter so far, with their races ending before they ever truly got going.

For others, each race has been a true fight to the finish with some contact and penalties along the way.

As we saw at COTA, this season’s top GT3 teams are proving to be a bunch of rowdy renegades straight out of the wild, wild west.