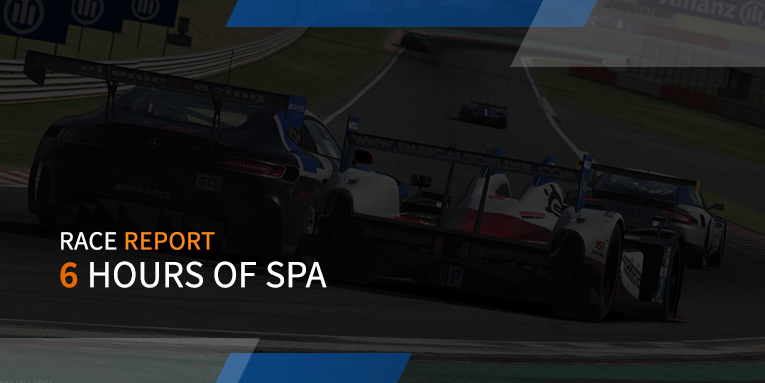 After an exciting race at the Nürburgring, the paddock went to Spa-Francorchamps for the penultimate round of the season. The race was a dress rehearsal for the big finale: 24 hours of Le Mans. 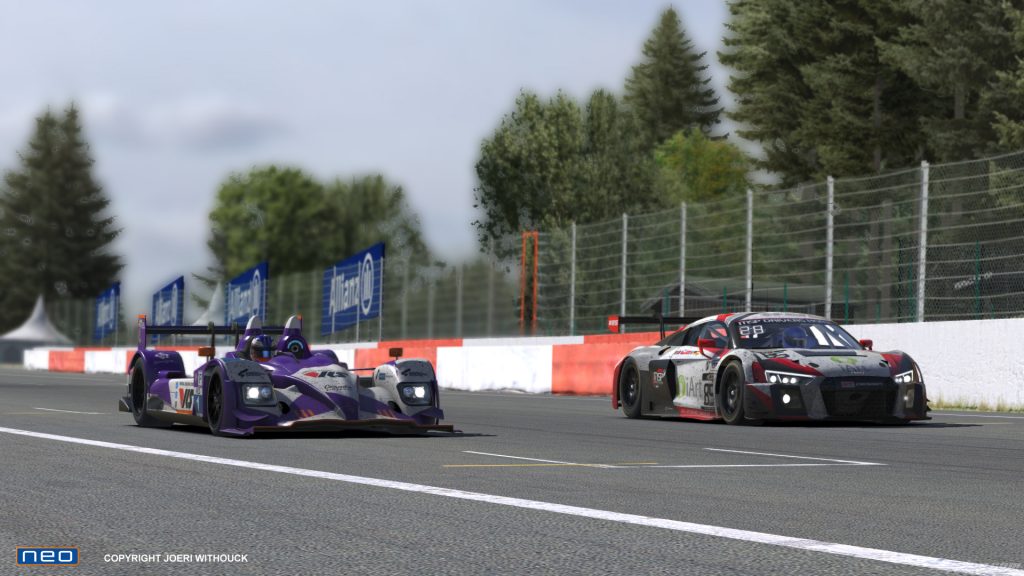 On Saturday CoRe SimRacing finally took pole position in the Prototype class. They were very close in the two previous rounds. At Motegi and the Nürburgring VRS Coanda Simsport managed to take pole position right at the last seconds of the session. Coanda Simsport qualified on the front row, as second. Thrustmaster Mivano Racing and Team Chimera completed the second starting row.

CoRe SimRacing took off right at start. Throughout the first hour, the 22 car managed to build a comfortable gap to the rest of the field. Then the team got struck by bad luck. Going through Raidillon, with a GT1 car right in front of him, there was an Audi who just crashed. Frederik Rasmussen could not avoid the Audi and ran straight into it. The car had significant damage. The team still managed to repair the car and complete the required distance to get classified. 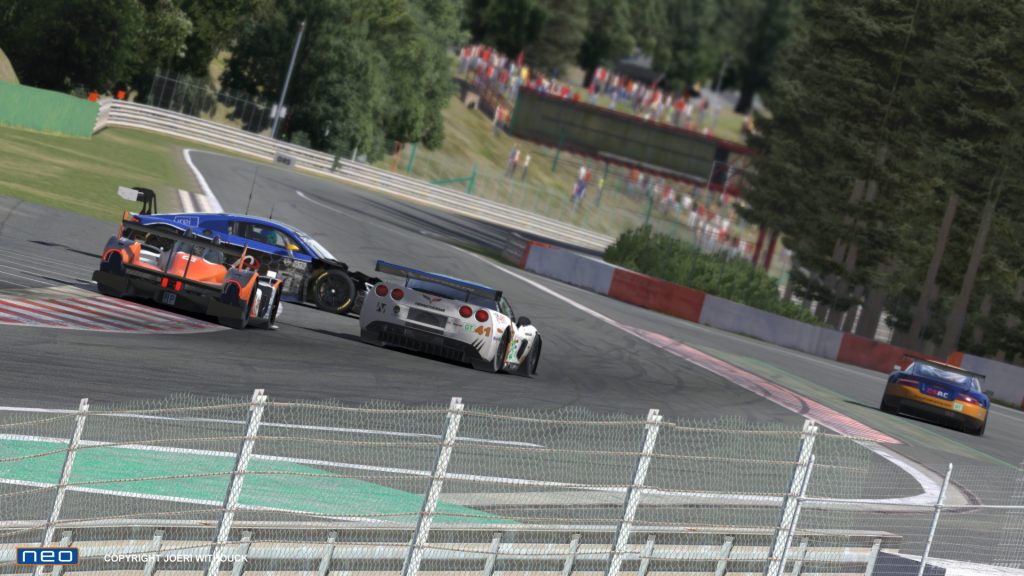 The defending champions took advantage from the bad luck for the 22 car. Coanda Simsport won the fifth round of the season, but it wasn’t easy. Friction Simsport, Mivano, and Radicals Online were fighting for that wing. The top 4 were 30 seconds apart after six hours of racing. Friction Simsport finished second, which is their best result so far. Thrustmaster Mivano Racing completed the podium.

Radicals Online missed the podium by less than a second and had to settle for fourth. Team Chimera finished fifth. TeamGT is having a good second half of the season, finishing in sixth position. Reactive Simracing finished seventh. Pure Racing Team Black finished eighth after a post race penalty.

Qualifying in the GT class was close. The top 3 were within 0.1 seconds of each other. Vendaval Simracing took pole position. Heusinkveld CORE Motorsport started from second place. On the second row it were Radicals Online and Torrent Motorsports.

As the race developed, it looked to be a three way battle between Vendaval Simracing, CORE Motorsport, and VRS Coanda Simsport. Coanda got pinged twice for avoidable contact. That ended the chance for a victory for the 48 team. 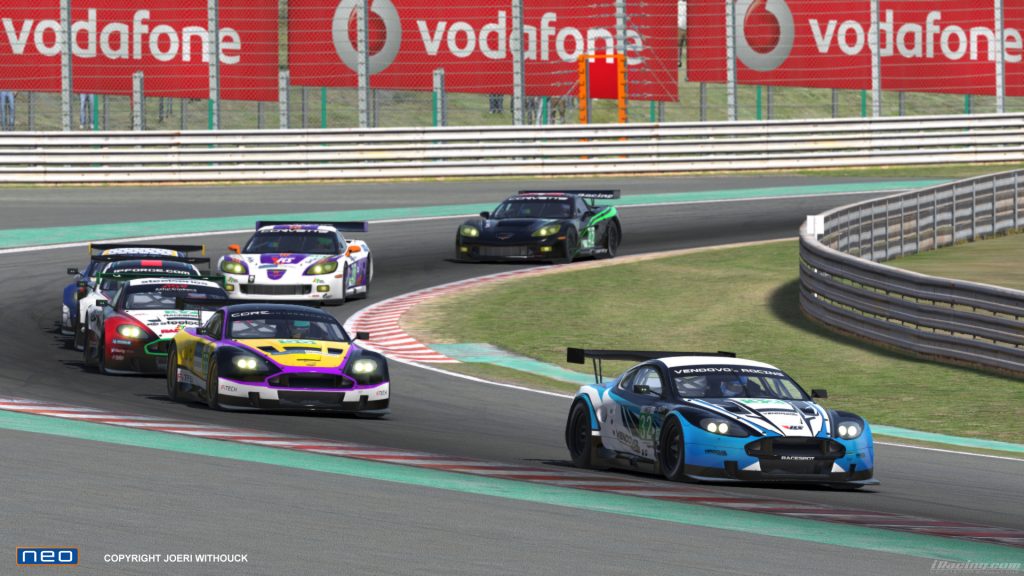 Vendaval Simracing kept CORE Motorsport behind them and took their first NES victory. The 55 team settled for second and extended their lead in the championship. Pure Racing Team GT had the pace to win, but had to start from 7th position. Finishing third is a great result for the 69 team.

Coanda Simsport managed to keep the damage relatively small by finishing fourth. Fenix Motorsports finished fifth, which is their best result of the season. Thrustmaster Mivano Racing fought its way back to sixth after starting from the pits. SimRC.de Iris finished seventh. SRN Motorsports, Team Chimera, and Racing Lions complete the top 10.

The streak is over for PRT

Pure Racing Team GTS took pole position on Saturday. MSP-Drivers Home 85 completed the second row with a difference of 0.056 seconds. The second row consisted of the Audi’s of CoRe SimRacing GTS and Atomic Motorsport. It is amazing how close the NES field is. The top 12 was within 1 seconds of each other. 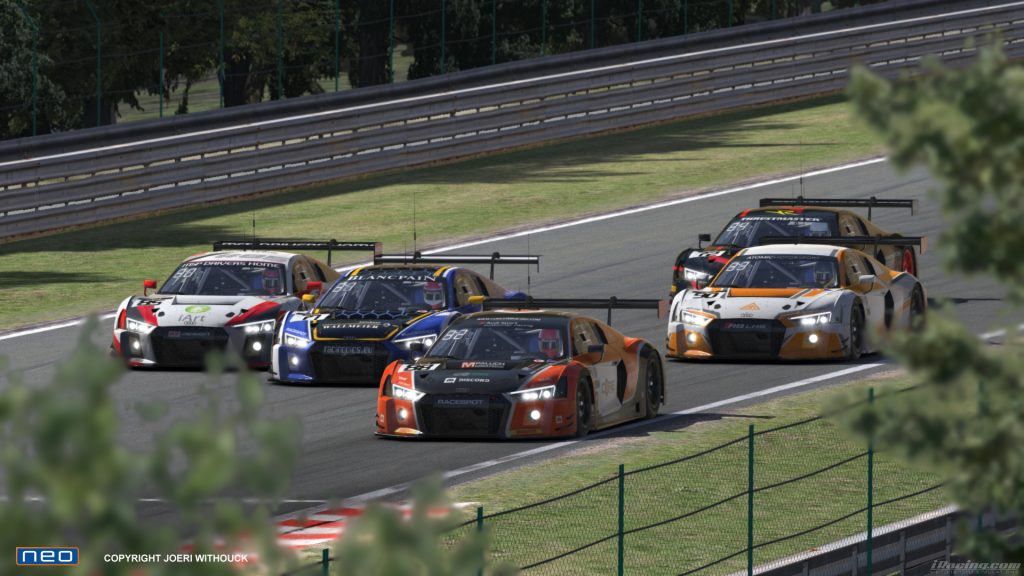 In the first hour of the race it looked like business as usual for Pure Racing Team. They have won every race so far and they lead the field in the early stages of the race. Unfortunately their change for victory disappeared after they crashed on top of Raidillon. MSP-Drivers Home car 85 took advantage and lead the field for the remainder of the race, resulting in their first NES victory. Shinya Michimi SimRacing got their best result of the season, finishing second. Thrustmaster Mivano Racing GTS closed the gap in the points by finishing on the final step of the podium.

Odox Motorsport had another solid race in their number 77 Audi. They finished fourth. Team RSO got their second top 5 finish of the season. Team DFTBA finished sixth after a solid race. MSP-Drivers Home car 83 finished in seventh. IRDK Endurance, Radicals Online, and TeamGT GTS round up the top 10.

Each race the teams with the least amount of incident points get rewarded for their safe driving. This prize is sponsored by the Motorsport Safety Foundation. They are committed to make motorsport more safe. For more information, go to motorsport-safety.org.

Full results and championship standings are available on the website. The race is also available on demand in the NEO race archive.

The big season finale is the NES 24 hours of Le Mans powered by Racespot. The race is March 25th and 26th. Green flag is March 25th at 15:00 GMT. The whole race will be broadcasted by Racespot on iRacing Live. With double points at stake, everything is still possible. Don’t miss the action!