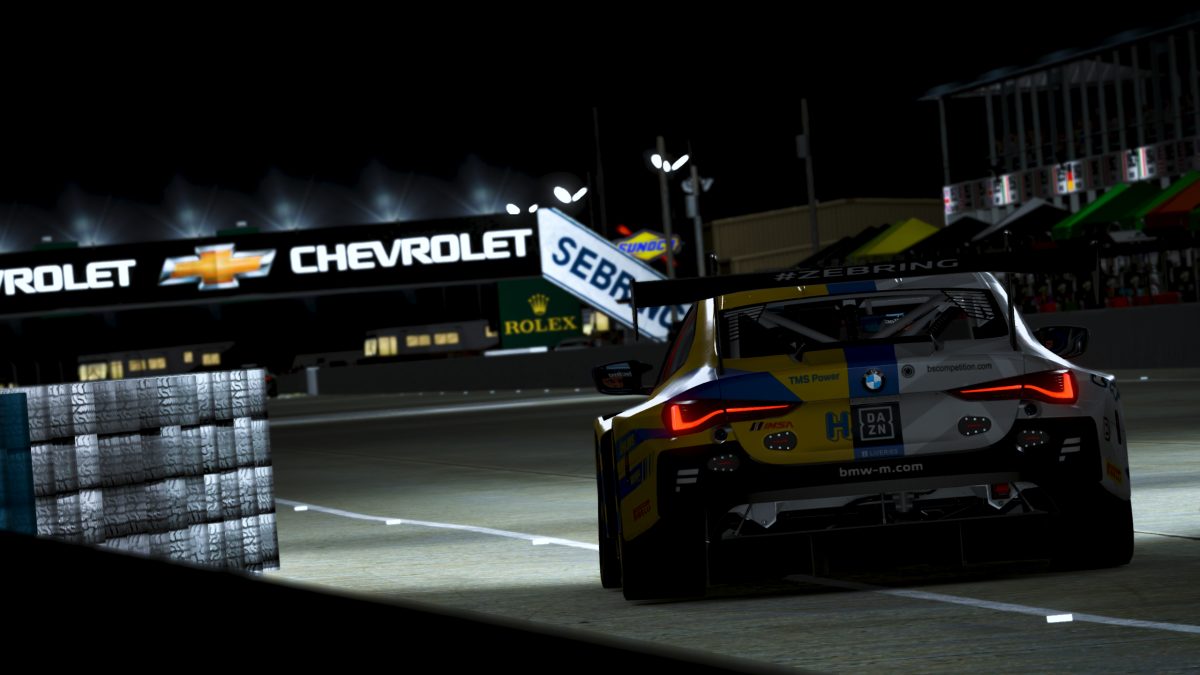 The BS+COMPETITION team had a flawless drive to claim its first win of the season in the 24H SERIES ESPORTS powered by VCO. Rainer Talvar and Ryan Barneveld won the GT3 class in the six-hour race at the virtual Sebring International Raceway, which ran alongside the inaugural 24H SEBRING at the real track. In doing so, the Estonian-Dutch duo also triumphed in the overall classification. After the successful season-opener in the 24H SERIES ESPORTS powered by VCO at the Hockenheimring last month, the second round of the series, which is held on the leading sim platform iRacing, again produced some spectacular Esports racing.

Having secured pole position by just 0.042s, Talvar held onto the lead at the start and, together with his BS+COMPETITION team-mate Ryan Barneveld, tightened his grip on that position as the race progressed. After 178 laps, the duo crossed the finish line 32 seconds ahead of the #45 Biela Racing Team EURONICS entry in second place.

The second of the Biela entries crossed the line in third, but a late-race penalty following contact with the Team Fordzilla GT4 would drop them behind the R8G Esports Lamborghini, awarding the French team a second podium in as many races. Behind the top 4 a close battle unfolded for fifth place with Maniti Racing finishing ahead of IUSP.S powererd by Vendaval Simracing, MAHLE Racing Team in the first of the Porsches and round 1 winners MSI eSports.

In the 992 class, first place went to Logitech G Altus Esports, as it did at the season-opener. The duo of Simone Maria Marcenò and Jordan Caruso looked to have a challenge on their hands from the Williams Esports team, but that challenge failed to come through following contact with the SimRC GT3 entry. Bram van Putten attempted a pass on Josh Thompson into T1, but the two came together in the middle of the corner and Thompson found himself in the wall and out of the race as a result.

The podium was rounded out by the #959 CoRe SimRacing and the #996 Asetek Simsports Volante entries, which means that following this race, the championship table matches this race result at the top of the standings. After a difficult first race for the SIMMSA Esports team, Gustas Grinbergas and Alexander Walton drove an incident-free race for the UAE-flagged team to come home in fourth.

SimRC also repeated its victory from the Hockenheimring in the GT4 class, however their race was not as straightforward as it was last time out. Marvin Strehl qualified the car in fifth, and on lap 1 a touch with the Guillaume Egloff-driven Undercut Racing Team entry spun Strehl around and put him 10 seconds off the lead. A strong comeback drive together with Hayden Berns culminated in a three way battle for victory with Undercut Racing Team and Team Fordzilla.

The promise of a grandstand finish was quickly taken away however, as Team Fordzilla came together with the second of the Biela Racing Team EURONICS GT3s with 30 minutes to go in the race. That meant that Torque Freak Racing Teamspeak was promoted into the podium places. Team Fordzilla ultimately came across the line 6 laps off the class lead in seventh place.

In the TCR class, Team Heusinkveld claimed its first win of the season. The Michael Schoettler/Fabian Siegmann duo came across the line with over half a minute advantage over MSI eSports, who still had Impulse Racing in close proximity. Hockenheim winners CoRe SimRacing came home last of the classified finishers in P7 after they were involved in a multi-car incident on the exit of Sunset bend, which caused a twenty minute delay for Corentin Guinez. The incident also caused the retirement of the Torque Freak Racing by TFRLAB 992 entry, and delayed both Inertia 992 entries.

The next round of the 24H SERIES ESPORTS powered by VCO takes place on 16th January 2022 at the Red Bull Ring. The titles will be decided on 17th April 2022 in the 12-hour race at Spa-Francorchamps.

Rainer Talvar (BS+COMPETITION, GT3 winner): “We are very happy about the first win of the season. I think qualifying was a really important factor today, as it was very important to be at the front because of the traffic. Being able to control the traffic gives you quite a big advantage over the race.”

Jordan Caruso (Logitech G Altus Esports, 992 winner): “If you had told me before the start of the season that we would win both of the first two races in that fashion, I wouldn’t have believed you. Simone has just been unbelievable in both races. I climbed into the car with a 30-second lead. That takes a lot of the pressure off you and allows you to focus on being more cautious and not making any mistakes. Hopefully we can continue this momentum until the end of the season.”

Hayden Berns (SimRC, GT4 winner): “We were a little bit worried about how many laps we could go in the end. The Fordzilla car, in particular, made us a bit nervous, but once we had done some quick maths, we were sure that we were looking ok. It is a pretty strong field in this series and we are not going into any round thinking that we will be the dominate winners.”

Marcel Tie (Team Heusinkveld, TCR winner): “It was a great race. I wasn’t racing by myself, so I have to give credit to Michael and Fabian who did a fantastic job today. An absolute beast of a performance by both of them. I think it is our very first win in the 24H SERIES and, of course, we are very happy with that. We should be leading the championship but there are still a few races to come and a long way to go.”

TFRLAB provides a Laptime Summary of each of the 24H SERIES ESPORTS powered by VCO races. If you want to have a closer look at the data from the 6H Sebring, check out their Summary here: TFRLAB | Laptime Summaries