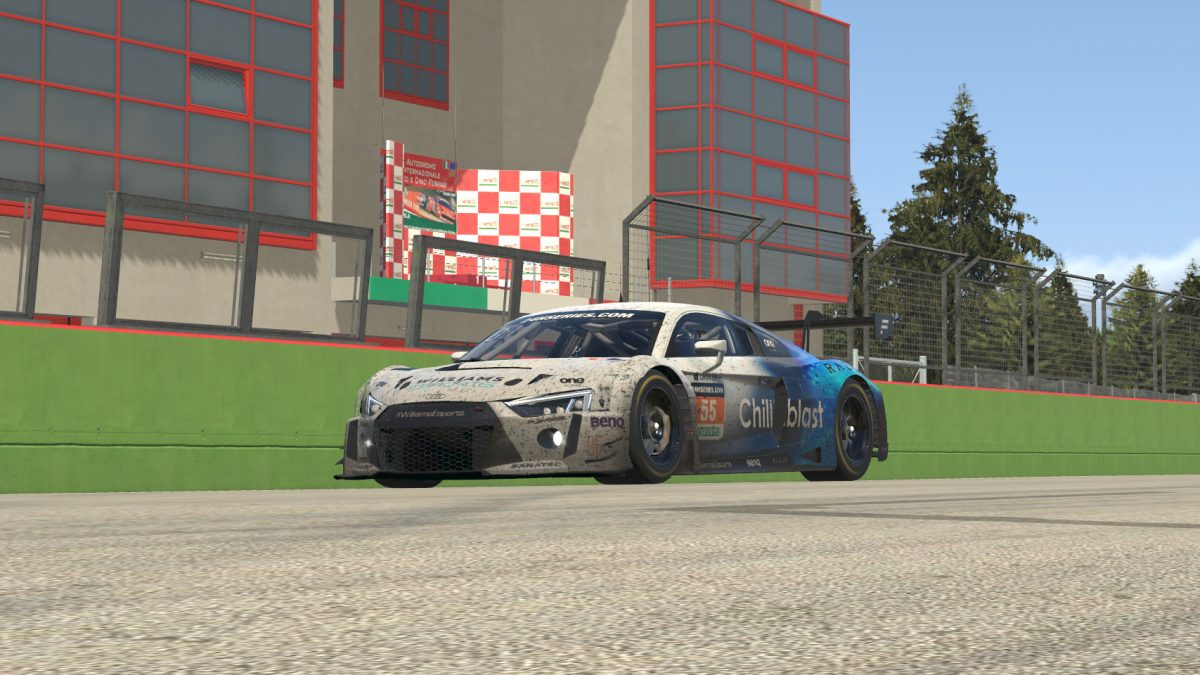 Just three weeks ago at Silverstone, it looked like Williams Esports may have lost their early-season magic. An early spin at Stowe corner and a mid-race tow to the pits left them in an also-ran eighth place rather than in winning contention.

But with their rival from Biela Racing Team EURONICS suffering even worse problems, Williams still left Silverstone in the points lead, and as the 24H SERIES ESPORTS moved onto Imola, Williams were keen to prove that rumors of their demise had been greatly exaggerated.

That seemed obvious from the end of qualifying. Williams’ Laurin Heinrich bested Biela’s Sven Haase by a tenth of a second, and at the very least, it looked like order had been restored at the top of the GT3 class after an unexpected but well-earned Silverstone win for Williams JIM Esports.

As for Williams JIM, their Moreno Sirica took the green flag in fifth at Imola, but he wasted little time moving up, getting past Ronin Simsport’s Filip Mitrevski in turn one.

Unlike Spa and Silverstone, which saw first-lap pileups in the class, the 6H IMOLA had a clean run to the green flag.

But it didn’t take long for an incident to occur on the tight track, and it involved another high finisher from Silverstone — third-place Mivano Simracing — whose Luc van Shaik was part of a three-wide battle for sixth at the beginning of lap two.

With DV1 TRITON Racing to his left and Leo Racing Team on the right, contact sent the Mivano Mercedes spinning out of the Audi sandwich and into the armco barrier.

While sliding back across the track, van Shaik miraculously avoided collecting the rest of the field, although Team Heusinkveld did catch a bit of contact and continued with a damaged rear wing.

The bigger problem came as Mivano rejoined the track in front of Virtual Motorsport and Biela’s #46 car. Both had to take evasive action to avoid a crash, and for Mivano, the result was a pair of 15-second stop-and-hold penalties.

Once the rest of the GT3 field hit traffic for the first time, it didn’t take long for the gaps to open up between pairs of battling cars.

Heinrich and Haase remained just two seconds apart at the front, but third-place SRC Squadra Corse fell more than eight seconds back midway through the first stint while Alessandro Bacchilega faced pressure from Sirica on his bumper.

Behind them emerged one of the biggest movers in the GT3 field early in the race. Plagued by crashes and penalties so far this season, the Leo team hoped some home-track heroics were in store at Imola.

After qualifying ninth, Dino Lombardi passed the likes of TRITON’s Dominik Blajer and Ronin’s Mitrevski to move the #12 Audi up to fifth by lap 15.

And as the race passed the first pit stop, a mix of strategy and traffic gave a different complexion to the front of the field.

Heinrich’s Williams team made a fuel-only stop while most other teams took tires. The result was a 30-second lead that shrank to just 10 seconds during the next stint.

Logitech G Altus Esports also opted to double stint their tires, and Lasse Sorensen jumped from eighth to third after the stops. But in yet another race this season, the season-five GTE champions’ podium hopes would fade away, this time after an unscheduled pit stop and eventual retirement just 12 laps into Sorensen’s second stint.

That elevated Williams JIM, which was among the first teams on pit road, into third, while SRC fell into a tight fourth-place battle with Leo’s Alessandro Bico.

For several mid-field teams, the middle stages of the race were spent fighting back from early penalties. S2V Esports, TRITON, and Sorg Rennsport Esports were all dinged for contact with TCR traffic, and while S2V’s David Peña Jimenez and Sergi Maturana managed to settle into seventh place, their penalty box brethren both fell outside the top ten.

A benefactor of those penalties was Phoenix Racing eSport, who were coming off a season-best fifth place at Silverstone and moved from thirteenth up to eighth by the midway point at Imola. While they spent most of the race outside of any close battles, that would change by the end.

One thing that didn’t change much all afternoon at Imola was the fight at the front. Even after Kay Kaschube and Lukas Jestädt took over for their teammates, the gap between Williams and Biela rarely went above ten seconds, and when Heinrich and Haase got back behind the wheel for their final double stints, the lead was less than five seconds.

But as with some other GT3 teams, penalties would become a factor for the leaders as well. One decisive moment came with 100 minutes remaining. Jestädt made a late dive inside the Altus TCR in the high-speed turn-9 kink before Acque Minerale.

Contact sent the Audi RS 3 LMS sliding off track, and Jestädt was faced with a 10-second stop-and-hold penalty during his final pit stop, plus an extra 25 seconds for serving a penalty during regular pit service — a new rule enforced beginning at Imola.

The more controversial incident came 30 minutes later. Heinrich approached the CoRe SimRacing TCR through the Villeneuve chicane, and with all four tires on the left-side kerbing and astroturf, he hit the Audi and sent it into the wall.

An obvious penalty for anyone watching was less obvious once officials talked to both teams. CoRe, which was out of the TCR podium battle after a series of mid-race misfortunes, said they tapped the brakes to give Heinrich a chance to complete the pass on the right side of the road before the Tosa hairpin.

But the quick closing speed between the cars caught them both off guard, resulting in the contact and no penalty to the Williams team.

The official decision came down just after Williams made its final stop, meaning no more trips to pit road or post-race time adjustments would be necessary.

With a 40-second lead that shrank to 35 at the finish, Williams solidified its comeback — if one race off the podium can even be considered a slump — and earned its second victory of the season.

Without its own penalty, Biela might have made it a close race, but they had to settle for second on this day, solidifying their second-place spot in the standings but falling to nine points behind Williams.

After a mid-race penalty to Williams JIM, Leo Racing Team inherited third, but their gap that was once nearly 15 seconds over SRC quickly shrunk to zero inside the final hour.

SRC’s Emanuele Petri emerged from his final pit stop just ahead of Bico, but when the two entered Tamburello together the following lap, their side-by-side race ended in a spin for Petri. Officials put the blame on SRC for cutting across the nose of Leo’s Audi, but issued no penalty.

That left Leo with clear track around them en route to their first series podium, while SRC earned its own best finish of fourth.

After a pair of penalties, Williams JIM made it to the finish in fifth. They picked up two positions with seven laps to go as the battling pair of Ronin and Phoenix made contact in Tamburello and ran off-track.

While both teams lost their shot at a top-five, they continued the fight for sixth all the way to the checkered flag. Phoenix’s Ruben Bonga seemed to have the speed advantage over Ronin’s Vincenzo Amico, but despite exiting Variante Alta door-to-door with the #99 Audi on the last lap, Amico held on while Phoenix finished seventh.

S2V was disappointed in their early penalty, and they suffered a second one in the final two hours, but they still managed an eighth-place result and remained in fifth place in the standings.

Meanwhile, MSI eSports is part of a three-way tie for seventh in points after finishing ninth at Imola. Although early front-end damage hindered their pace, the team avoided penalties and salvaged a solid recovery from their Silverstone DNF.

In the closing laps, tenth place looked like it belonged to Biela’s #46 team, but a spin exiting Rivazza with four laps to go let Team Heusinkveld catch up and take the position.

Biela fell to eleventh while the penalty-stricken Sorg and TRITON teams finished twelfth and thirteenth. For Team RSO, an early spin and unscheduled stop dropped them out of top-ten contention, but they picked up two points for their efforts in finishing fourteenth.

The final points-paying position came down to a last-lap battle and contact entering Piratella between Huber Racing E-Sports’ Michael Drechsler and Virtual Motorsport’s Dennis Gerressen. As Drechsler spun, Gerressen continued to take fifteenth, while Huber’s skid of races without scoring points extended to three in a row.

Mivano’s eventful race beginning with its early spin ended in seventeenth, four laps behind the leaders, and Altus was the only GT3 that failed to finish.

While Imola promised plenty of action between classes, it also delivered close racing — and some bumper-banging — between GT3 teams all the way to the finish.

Even the winners didn’t roll into victory lane without a few scratches on the nose, but whether you credit a controversial no-call by the stewards or their show of speed all weekend, Williams Esports seemed to find their magic once again as they returned to the top of the podium.