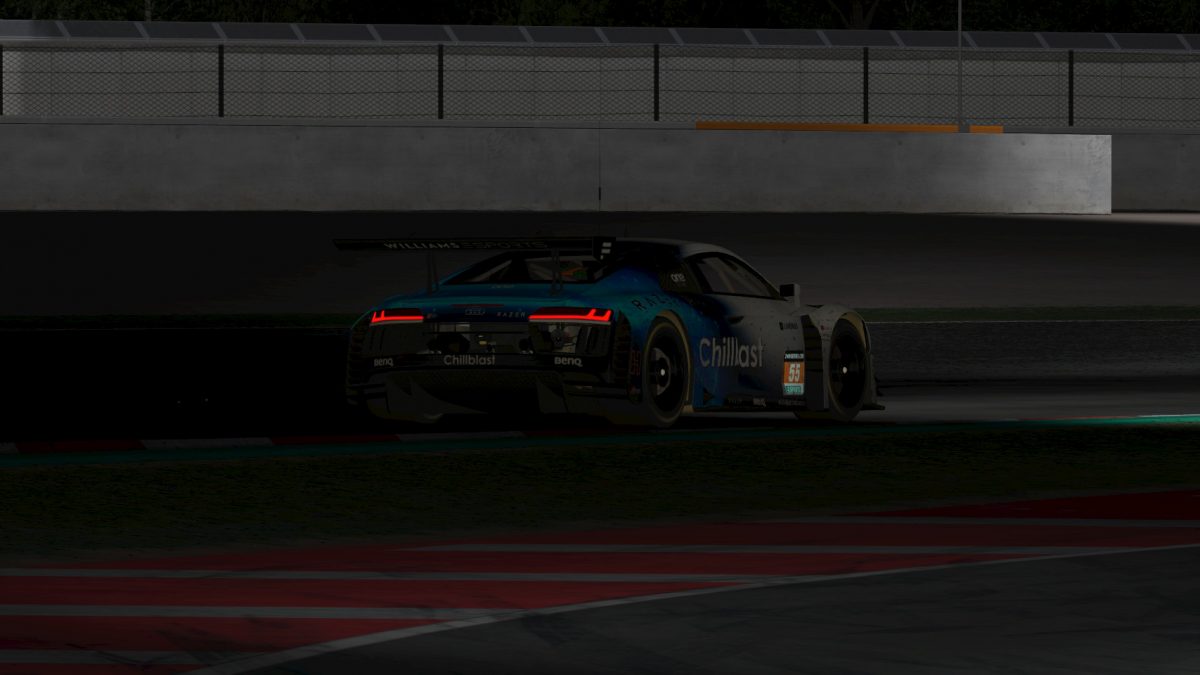 With two wins already on the season, a talent-stacked lineup capable of going three or four drivers deep in a 12-hour endurance race, and the clear car of choice in the class — the Audi R8 — for the twisting Circuit de Barcelona-Catalunya, the odds were certainly in their favor.

But you could have been forgiven for questioning the team’s status after a shaky 6H MONZA last month, in which they started fifteenth, finished a distant sixth, and failed to keep up with even the top Audi teams in class, let alone the pace-setting Mercedes.

To remove any doubt, they would need a dominant bounceback performance. After all, at least four other teams were within striking distance in the standings, and another finish off the podium could have cost Williams a chance at the championship.

They unloaded in Spain with speed, and from the start, they were clearly among the teams to beat. Kay Kaschube qualified the #55 car in second, just behind surprise polesitter Tobias Hüweler in the Biela Racing Team EURONICS #46 Audi seeking to play a spoiler role and steal some points to help his teammates in the championship-contending #45 entry.

Williams wasted no time getting to the lead, though, with Kaschube making a daring outside pass in turn 7 to get around Hüweler and completing lap 1 with a two-second advantage already in hand.

From there, it was more of the same as the Williams Audi walked away from the field. Midway through the first stint, Kaschube’s lead over second-place Dino Lombardi from Leo Racing Team stood at five seconds. By the first pit stop, it had ballooned to more than ten seconds.

And by the six-hour mark, just three teams remained on the lead lap, as the rest of the GT3 field was torched by the torrid pace of Kaschube, Dominik Staib, and Arthur Lehouck, who was still running full speed ahead in the drive to the checkered flag, setting the race’s fastest lap with only eight laps remaining.

In total, Williams led all but six of the 401 laps completed, only losing the lead during some early pit stop sequences as other teams stayed out a lap longer.

Their third win of the season was the most convincing of the lot, and it was rewarded with the series championship — Williams Esports’ first in NEO Endurance competition.

A Tight Fight for Second

Since Williams lapped the rest of the field just after darkness settled on Barcelona, there was little drama surrounding who would win the race and the championship. But the battles for both second on track and second in points went down to the final corners.

For the first three-quarters of the race, Leo Racing Team looked steady in second place, but a pair of bumpy stints for Matteo Ugolotti, including two spins on old tires, brought other contenders into the mix.

Among them was Biela’s #45 team, which entered the race third in the standings, just seven points behind Ronin SimSport, who was the highest-running Mercedes at Barcelona and spent most of the race running inside the top five.

One Audi on the move belonged to MSI eSports, whose Julian Rodriguez Moreno climbed from fourth to as high as second during his race-ending double stint.

In the final hour, Biela’s Gregory Tanson got past Moreno and began to open a gap: three seconds, six seconds, and eventually ten. But that time gained wouldn’t be enough to save the position from a five-second stop-and-hold penalty earned when Tanson sent the CraigSetupShop TCR for a slide in the turn-9 kink with an hour to go.

Tanson hit pit road with three laps remaining, but instead of MSI inheriting the position, Leo’s Alessandro Bico made a move on the same lap, getting the #12 Audi past Moreno after a brave side-by-side duel through the final chicane.

The two stayed nose-to-tail until the finish, but Bico held on to claim Leo’s second podium of the season while Moreno took the first for MSI in the GT3 class.

Tanson’s drop to fourth after the penalty also cost the team a position in the final standings. With Filip Mitrevski crossing the line in fifth for Ronin, the #99 team held onto second in points after a remarkable season in which they never finished worse than sixth.

Mixed Fortunes in the Mid-Field

A number of teams hopeful for a good finish to end the season endured a rocky race at Barcelona, beginning with Phoenix Racing eSports. Ruben Bonga had the #5 car inside the top five after the first lap, but he fell back to eighth late in his opening stint.

Just two laps after teammate Tim Matzke took over for Phoenix, he made contact with the #77 Aurys Racing Team entry while fighting through 991 traffic in turn 9. However, even after serving their penalty, the team remained in fifth, buoyed by their strong race pace.

The Phoenix team remained in top five contention for most of the evening, but they dropped to sixth after serving their second penalty of the race inside the last hour.

Similarly, SRC Squadra Corse struggled to overcome two penalties of their own, and the #27 team couldn’t match their season-best third-place finish at Monza, coming home seventh in Spain.

The Silverstone winners from Williams JIM Esports also landed in the penalty box — in their case, on four separate occasions totalling nearly three minutes being held in the pits — but still managed an eighth-place result.

NEO’s longer endurance races have always been a strength for Virtual Motorsport, and the Barcelona round was no different.

While the team acknowledged their struggle for speed this season, coming in with a best finish of tenth at Spa, a clean race for Dennis Gerressen and Michael Storm had them inside the top ten after starting thirteenth, and they finished in ninth.

At the back of the top ten, the hopes for Biela’s pole-sitting #46 team vanished quickly with a first-lap spin at turn 10. After falling to the back of the GT3 field, Hüweler, Efkan Birkiye, and Markus Papenbrock made a steady climb back to sixth. However, a pair of penalties in the fifth hour and a solo crash on the frontstretch with three hours remaining dropped them to tenth.

Full-season entrants clearly showed their speed on Saturday, but that didn’t stop four invited teams from trying to make a name for themselves in NEO competition.

The highest-placed of the invitational entries was SIMMSA Esports in the race’s lone BMW Z4. Their five-driver lineup was filled with experience, from starter and past 24H GT SERIES competitor Christopher Zoechling to closer and NEO veteran Lewis Goodway.

Their top performer was Fraser Williamson, who put the team inside the top ten at the one-third mark, but by the final few hours, they had settled into eleventh, which is where they finished.

One lap and one position behind them was Red Camel Racing Esports, including 24H SERIES TCR drivers Luc and Rik Breukers. Teammate Jorn Zoetekouw made perhaps the biggest splash, jumping from fourteenth to sixth on the first lap after a three-wide outside pass into turn 1 and some stealthy accident avoidance at turn 10.

However, a second-hour penalty dropped them to the back of the GT3s, and from there, they managed to move up only to twelfth.

In a battle of invited entries throughout the first half of the race, Red Camel traded positions with the TRC Racing team, a class champion from the CV Resistencia series. Once day turned to night in Spain, the TRC Mercedes struggled to match the pace of their opponents, and they finished in thirteenth as the final GT3 classified.

Season-long entrants from Team Heusinkveld and Team RSO both failed to finish, the latter after a violent spin into the frontstretch wall at the hands of the HM Engineering 991 car.

The final invited GT3 entry from Aurys had a top-ten run going in the second hour before they were collected by a spinning Porsche just ahead of them entering turn 4.

Huber Racing E-Sports and S2V Esports each retired in the early hours, along with Mivano Racing after making heavy front-end contact with the Red Camel Mercedes just five laps into the race.

Mivano’s reversal of fortune from winners at Monza to the first car out at Barcelona shows how quickly things could change this season, especially in the GT3 class.

The class champions from Williams Esports also bounced around the results sheet all year — winners at COTA, ninth at Silverstone, winners at Imola, sixth at Monza — but there was no denying them at Barcelona.

A prime-time performance put them back in victory lane and left no doubts about the top GT3 team in this 24H SERIES ESPORTS season.