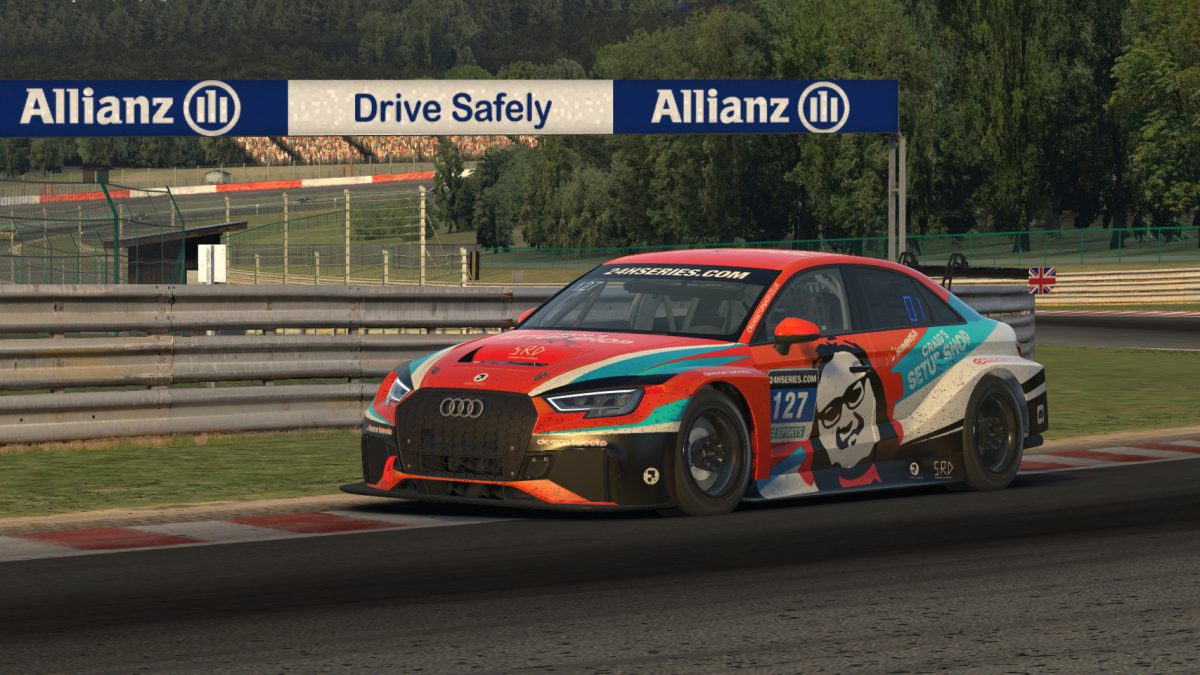 The new 24H SERIES ESPORTS format brought a new style of racing to NEO. In Sunday’s 6H SPA-FRANCORCHAMPS, the TCR class competition featured drafting, pack racing and bumper-banging, at times looking more like NASCAR at Daytona than an enduro at Spa.

And like the stock car series, which has its roots in moonshine runners running from the police, the TCR race finished with one team in trouble with the law. On this day, though, the fastest outlaw ultimately won the race.

From the start, the racing was as frantic as it was fun to watch. Before the first round of GT3 traffic arrived, a nearly uninterrupted train of 17 TCRs led by polesitter Lasse Bak from Prologue React E-Sport circulated Spa, with few battles and a lot of drafting keeping the field bunched up.

One of the first side-by-side fights in the class also drew one of the race’s first penalties. Sorg Rennsport eSports and RaceKraft Esports raced door-to-door into Les Combes on lap 9, but mid-corner contact sent RaceKraft’s Kane Halliburton spinning into the wall.

The leaders kept it clean in the early laps, generally running single-file while watching the faster classes flash by in their mirrors and managing the TCR’s temperamental tires. Midway through the first stint, they managed a six-car breakaway, with Prologue leading CoRe SimRacing and CraigSetupShop at the front of the pack.

Later in the stint, tire management clearly paid off for the CraigSetupShop team. Jack Sedgwick moved into second and stayed on Bak’s bumper until peeling off for the first round of pit stops just past the one-hour mark.

This early in the season, pit strategy appears to be a moving target for TCRs. While tires seem easy to overheat, they’re also slow to come up to temperature, so an earlier stop for new rubber isn’t always a foolproof plan.

That was the case during the first round of stops, as Prologue pitted three laps after CraigSetupShop and CoRe but were still leading the race as the second stint got started. Bak was even able to stretch out a five-second lead, but the speedy Sedgwick again chased him down, with CoRe’s Carl E. Jansson and Jamie Fluke from Evolution Racing Team keeping their Audi RS 3 LMS train cars hitched together as part of the leading foursome.

Those sorts of mini-packs were common throughout the class after two hours of racing. The fifth-place fight had SimRC, MSI eSports, and Vendaval Simracing stuck together, with ASTRO Gaming Altus Esports’ Tuomas Tähtelä on his own a few seconds back, followed by a pair of two-car tandems with Williams Esports and Torque Freak Racing, and Satellite Racing Team and Team MAD.

The second pit stop saw wholesale driver changes for the leaders. Among them, Prologue swapped in Mikkel Gade, CraigSetupShop put Simeon Lynch in the car, and Ross Balfour took over for CoRe.

With those new drivers behind the wheel, the TCR field began to shuffle for the first time all race. CraigSetupShop and CoRe broke away in the lead, while Evolution, Prologue, MSI, and SimRC made up the second pack around seven seconds back.

As drivers found themselves racing around new opponents in the first round of the season, several earned penalties for contact in the close and competitive confines of the TCR class.

Satellite Racing and RaceKraft each earned penalties for their roles in a lap-23 contretemps, while Sorg earned two more penalties — one for avoidable contact and one for an unsafe rejoin — and was on the receiving end of a penalty-inducing hit from Team MAD.

The most consequential penalty of the day, though, was assessed to the race leader with just over two hours remaining. With Lynch still leading Balfour, he hooked the Gold Racing Team Porsche entering Les Combes and earned a 15-second penalty, which was assessed during their next pit stop.

CraigSetupShop, the team that seemed to take the best care of its tires, was suddenly forced to drive hard if they hoped to close the gap to the new leader, Jansson from CoRe, while defending against MSI and Vendaval.

With Sedgwick back in the car, they had a chance, but it would also require some strategy. After CoRe made its final pit stop with 50 minutes to go, Sedgwick waited an extra 15 minutes to stop, getting the most out of his tires and taking less fuel to save time in the pits.

From eight seconds behind before the stops to eight seconds ahead afterwards, CraigSetupShop and Sedgwick had reversed the lead gap and overcome their penalty, all in the span of just 60 minutes of racing.

The lone survivor at the front from the race-opening big pack, CraigSetupShop opened its first NEO campaign with a win. CoRe finished second while Vendaval’s Matti Kaidesoja and Juan E. Lopez moved forward all race to end up on the podium.

MSI and SimRC each earned top-fives while Prologue React slipped from its early lead to sixth place at the checkered flag. Evolution fell out of the lead group after making a mid-race fuel-only pit stop, and they came home in seventh.

Due to struggles with tire wear, Altus was in something of a TCR-free bubble all race, missing most of the big pack battles and quietly finishing mid-field in eighth. And from no man’s land to No Name Corner, Alpinestars Geodesic Racing clipped the wall at turn 11 after contact from a Porsche in the second hour, but they recovered nicely, moving from fourteenth at the time of the incident to ninth at the checkered flag.

That drive through the field included a pass on Williams Esports with six laps to go. For Williams’ Moritz Löhner, his double-stinted tires seemed to run out of life and pace in the run to the finish.

After their earlier battle with Williams, Torque Freak Racing settled for eleventh, while their fellow NEO veterans from Team Chimera fell from an eighth-place start to a twelfth-place finish after a pair of unwitting collisions with Porsches.

RaceKraft’s rough day at Spa ended in thirteenth, while their early sparring partner from Satellite Racing Team in the #112 car was one spot behind them. Team MAD struggled to rebound after a tough middle stint, putting them in fifteenth.

With no attrition in the class, Satellite’s sister car could only move up one spot from its last-place start. And after numerous incidents and penalties, Sorg finished seven laps off the pace in seventeenth.

While TCR drivers seemed worried entering the race about being motorized punching bags for the faster classes, they seemed to hold their own in the first test of this season’s multi-class environment.

And while it wasn’t with perfect marks, one team seemed to rise above the others in this early exam.

The comeback drive to win was a big statement for CraigSetupShop, the team whose business component hinges on the speed of its setups and the talent of its setup makers like Sedgwick.