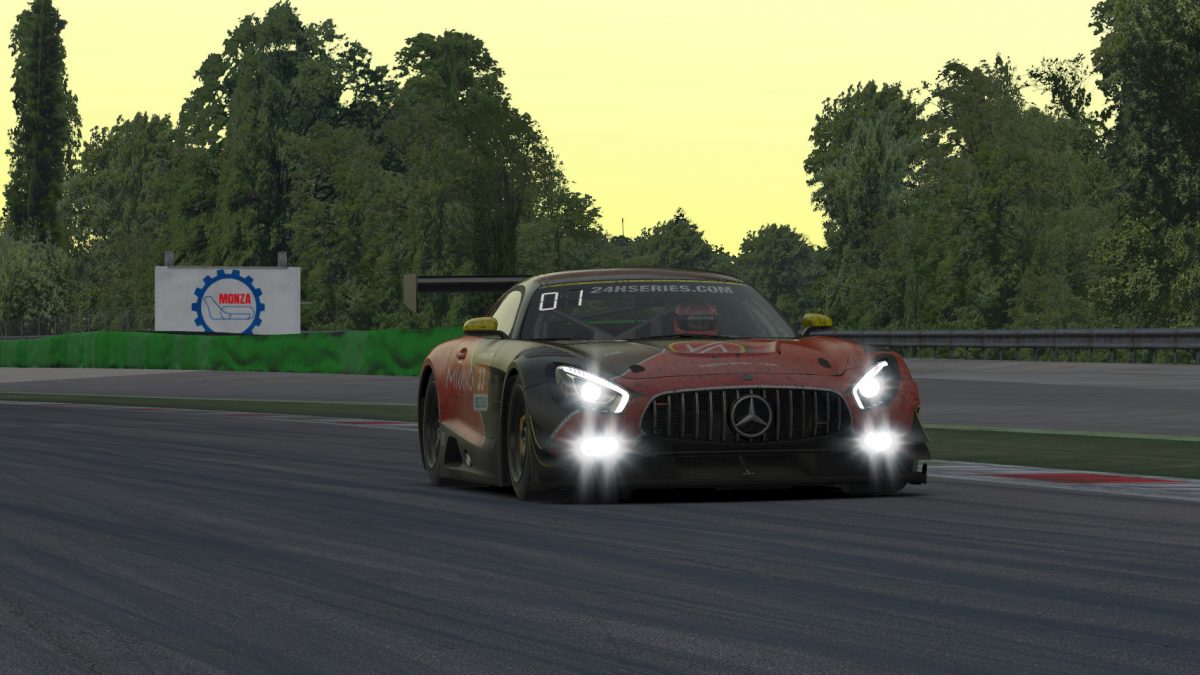 For a race held on Super Bowl Sunday, it was only fitting that the 6H MONZA came down to a battle between very different offensive philosophies, one player carted off due to injury, and a final play under further review after a questionable case of roughing the passer.

As is common in America’s biggest sporting event, the race saw one of the legends of the (e)sport wow fans with a performance to remember, beginning in qualifying.

Indeed, Monza proved to be a friendly circuit for the Mercedes in the field, as they took five of the top six starting spots. The highest-placed Audi R8 belonged to Biela Racing Team EURONICS’ #45 car, which needed a good Monza run to claw back points lost at Silverstone and Imola.

Their chief rival from Williams Esports struggled in qualifying and Arthur Lehouck managed only fifteenth on the grid for the points leaders. That meant he was eager to move forward at the start, but a lap-two pass through the Variante della Roggia chicane that forced the Huber Racing E-Sports Mercedes onto the kerbs netted Lehouck a warning from race control.

Among the rest of the GT3 field, it was a surprisingly smooth start, including an incident-free first corner and mostly clean racing through traffic.

That traffic did keep the front of the field closely bunched up. Carlà’s four-second lead evaporated once the GT3s hit Porsche traffic for the first time, and the driver on the move behind him was Filip Mitrevski from Ronin SimSport.

By lap 18, the two were bumper-to-bumper, beginning a battle between them that waged on for most of the afternoon.

But there was at least one other car in the mix with those top two Mercs, and it belonged to Biela. Sven Haase moved the #45 up to third on lap 9 and was able to keep the leading pair within two seconds as the first round of pit stops began.

At that point, the Biela team used a strategy gamble — changing just one tire — to take the lead. They weren’t the only team to double stint tires, either. SRC Squadra Corse and Logitech G Altus Esports both took only fuel in their first stop, putting those three teams up front while Mivano and Ronin on four fresh tires fell to fourth and fifth.

While Haase managed to hold a relatively steady lead at the front, his team also made a surprising call by pitting him 15 minutes before the two-hour mark, effectively putting a five-stopper out of reach.

Biela’s off-sequence strategy, as well as the double-stinting plans used by several other teams including Williams, gave the front of the field a revolving door look during the middle stages of the race.

Lukas Jestädt took over in the #45 car and he cycled back into the lead, while Dino Lombardi from Leo Racing Team spent a stint in second before a pair of penalties dropped the third-place finishers from Imola out of podium contention at Monza.

Mivano and Ronin stuck to their full-service strategies at every pit stop, and by the midway point as they approached their third stops, the dueling duo was back up front, with Dion Fiallo leading Andreas Jochimsen by five seconds.

Penalties and on-track incidents were generally limited in the GT3 class, but a few teams did suffer early setbacks that cost them time and positions on track. Among them was S2V Esports, whose second-place qualifying effort unravelled in the first stint.

Sergi Maturana fell to eighth before the first pit stop, and a speeding penalty entering pit road plummeted them to the bottom of the running order.

It was also an up-and-down afternoon for Williams JIM Esports. The Silverstone winners had high hopes of another strong result in their Mercedes at Monza, but contact from the Leo Audi plus their own run-in with a Porsche left them damaged, penalized, and eventually outside the top ten.

With little help from attrition, teams hoping to climb up the ranks had to use raw pace to get there. The most successful among that group was MSI eSports, who fell outside the top ten in the first hour but used a strong drive from Álex Ardisana and Alvaro Ramiro to climb back inside the top five just after the three-hour mark.

While they were half a minute behind the leaders, MSI had their hands full with SRC, whose Alessandro Bacchilega made a pass for fourth on lap 152 to put the #27 car on deck for a podium if something went wrong ahead.

And it soon did.

The final hour was must-watch racing among the GT3 leaders. Haase re-took the lead for Biela but still had to take a splash of fuel at some point, so he would need every bit of his 45-second advantage over the AMGs trying to chase him down.

Among that pair, they traded places when Jochimsen passed Fiallo in the fourth hour of the race, and with their starting drivers back in the cars, Mitrevski’s four-second lead was shrinking by the lap as Carlà gave chase behind.

With 40 minutes to go, the scoreboard clicked over to lap 172, which became one of the most consequential of the season, at least for the championship contenders.

Exiting the della Roggia chicane, Haase ran wide onto the gravel, and while rejoining the track, his Audi snapped sideways and smacked the driver-side armco barrier.

In an instant, his chances of winning the race were finished, as the #45 car was forced to retire due to the damage.

But the biggest potential benefactor in the standings, Williams, had its own problems on the same lap. Exiting Variante Ascari, Josh Thompson ran wide over the astroturf, hit a bump, and backed into — wait for it — the driver-side armco.

The top two in points had similar solo spins just seconds apart, and while Thompson was able to continue in fifth place, that also increased the pressure on third-in-points Ronin to capitalize and take the win.

But it wouldn’t be easy, as Carlà was on their bumper inside the final ten laps. The two remained in lockstep in the draft, but Carlà couldn’t find an opening.

Finally on lap 193 — with four laps remaining, the two Mercedes entered the first chicane side-by-side and exited with Carlà just half a car length behind.

Mitrevski took a defensive line entering the della Roggia chicane, and in the braking zone, wheel-to-wheel contact sent the #99 Ronin car head-on into the wall.

Mivano continued unscathed, and it became clear that the controversial moment amid their battle with Ronin wouldn’t be reviewed by the stewards until after the race.

Eventually, the officials cleared Carlà, noting that Mitrevski drifted to the right and across Mivano’s nose. After a nervous three-day wait following the race — and more than ten months since last tasting NEO victory in the season-five finale at Le Mans — Mivano again ended up on top, this time with Carlà and Fiallo the winning duo.

Despite their damage, Ronin continued on to finish in second, equalling their best result of the season from Silverstone. It also elevated them to second in points, bypassing Biela after their late crash and DNF.

SRC Squadra Corse also benefited from the Biela crash, putting Bacchilega and Marco Gabriele Nesi onto the podium for the first time this season and completing the Mercedes sweep of the top three spots.

MSI’s strong recovery ended in fourth, while Sorg Rennsport eSports got past the wounded Williams car in the closing laps to take fifth.

With Williams ending in sixth, their points lead shrunk to 12 points entering next month’s 12H BARCELONA with double points on offer.

Team RSO came away from Monza with its best result of the season as Cedrik Nebelsiek moved from eleventh to seventh during his final stint.

Eighth went to S2V after Maturana passed Huber’s Michael Drechsler inside the final hour. A quiet but consistent race in the #5 Audi moved Phoenix Racing eSport into the top ten by the finish.

Team Heusinkveld was one Mercedes team that couldn’t find the pace to compete around Monza. After qualifying last in the class, Gunnar Miesen grinded out four stints in the #35 car to come home in eleventh.

The battered Williams JIM Mercedes finished twelfth, and their early-race sparring partner from Leo fell from the podium at Imola to thirteenth at Monza.

Michael Storm from Virtual Motorsport was sent for a first-lap spin in the Lesmos by DV1 TRITON Racing, and those two teams struggled to move forward after that, finishing fourteenth and fifteenth, respectively.

The rough day for Biela Racing Team EURONICS applied to both of its entries. The #46 car finished two laps down in sixteenth, and the #45 failed to finish. After tangling with a pair of Porsches in the first hour, Altus suffered crash damage and eventually retired.

Few races in any NEO season have had such a dramatic ending — or such a nervous wait for the final results to be confirmed — as last Sunday’s Monza affair, and it represented very different things for many of the teams involved.

For Mivano, they avoided another chapter of disappointment — which has already seen a pair of incidents in the first two laps effectively end their chances at Spa and Imola — and again showed the GT prowess they harnessed to win the season-two GT1 title.

While Mivano’s championship hopes are slim, for other contenders, the title is very much in play. Among them, Williams may breathe a sigh of relief after their late damage and Biela’s even bigger crash helped them keep the points lead, while Ronin’s bittersweet ending saw them gain ground in the points but crucially miss out on the victory.

For all three teams, the “what if” scenarios will be swirling in the month-and-a-half break before Barcelona.

Unlike the Super Bowl, the 6H MONZA may not have crowned a champion or closed the curtain on the season, but it did provide the sort of edge-of-your-seat excitement — without the kooky commercials or scandalous halftime show — that would make the NFL clamor for the same level of intensity.