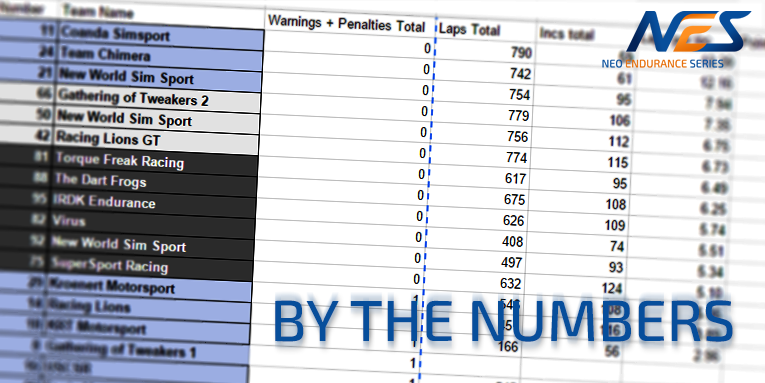 With just one race event remaining in the NEO Endurance Series season 1, we thought we would take a look at some additional numbers and perhaps get a bit wiser. For the ordinary numbers of standings and championship points head over the the Standings page. However in this article we will take a look at the performance of teams regarding number of incidents and number of penalties – all combined from the season so far.

From the numbers it seem that Prototype cars are generally less involved in incidents as their ‘Laps per inc’ is generally higher than the other classes. We won’t investigate why in this article but bear in mind that the faster classes do more laps than slower classes over the same time span. Nonetheless it’s worth mentioning Coanda Simsport #11, Gathering of Tweakers #66 and Team Chimera #87 as they are the most “clean” teams in their classes so far.

The last bit of number crunching is by counting total number of warnings and penalties for each team, given by the Race Control. We are not counting the protests which in the end resulted in a No Further Action decision:

Most teams have been very clean overall, while a few teams still can improve on their performance. Being clean while still getting most points in the classes we find Coanda Simsport #11 in Prototype, New World Sim Sport #50 in GT and IRDK Endurance #95 in GTC.

Once the last race event at Road Atlanta has finished we will update the numbers as a Season 1 By The Numbers article.

Watch the last round of Season 1 to find out how the teams are performing. Watch it here on March 15 at 14.00 GMT.

Lots of action under the lights in Motegi