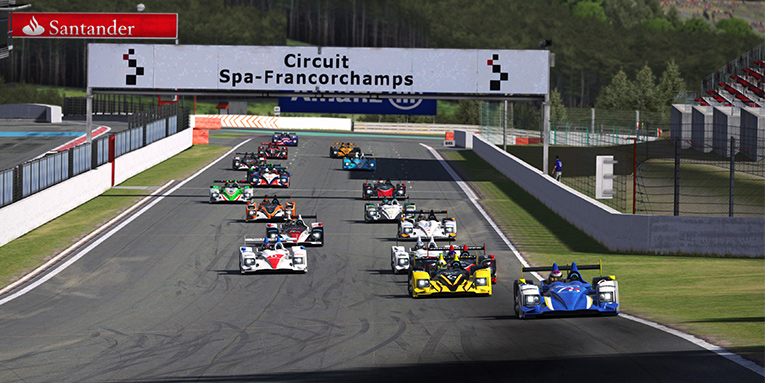 We’re one month removed from the NEO 24 Hours of Le Mans, and many teams and drivers are beginning their summer sabbaticals.  But which ones can rest easier knowing they have a reserved spot on the grid for season 5?

Let’s take a look at the automatic invites and how they got there, beginning today with the prototype class.

Capturing the class championship was Pure Racing Team, which won the first five races and just missed the clean sweep with a second-place finish at Le Mans.  Of course, when your lineup includes the top driver in road iRating, Maximilian Benecke, and HPD expert Patrick Wolf, you expect nothing less than success.  They won with big margins — three wins by at least 30 seconds — and eked out a few small ones, taking two wins by less than 10 seconds. That left little doubt that Pure was the deserving prototype champion.

The only team to deny Pure a race win was Thrustmaster Mivano Racing’s #33 entry, which won Le Mans with a strong three-man lineup of Marcus Hamilton, Tommaso Carlà, and Frederic Evers.  Carlà was nothing if not consistent this season: in all six rounds, he qualified in second place. With that steady driving, where else would you expect them to finish in points?!

Fresh off his co-championship in the Blancpain GT World Championship Series, Isaac Price led CoRe SimRacing’s #22 team to a runner-up finish at Sebring alongside Maxime Pauly. CoRe picked up another second-place finish at Road America, and with a nice buffer in the standings, even skipping the Le Mans race didn’t cost them their third-place overall classification.

CoRe did need a tiebreaker to slot in ahead of Thrustmaster Mivano Racing, which also placed their #34 HPD in the top four of the prototype standings.  The headliner in their lineup was a familiar name on the world endurance racing stage, José María López, but teammates Maxime Brient, Dion Fiallo, Gabor Mecs, and Ashley Owen all contributed to some strong showings, including a pair of podiums at Motegi and Le Mans.

After absorbing the Infinity Simsport team following their DNF at Sebring, Radicals Online made an impressive come-from-behind charge into the top five in prototype points. With Paul Ilbrink and Carl Jansson in the lineup for the final three races, the #8 HPD finished second at the Nürburgring and fourth at both Spa and Le Mans.

A newcomer to the season 4 grid was the all-Spanish squad of Teo Martín eSports.  Julian Rodriguez Moreno and David P. Pérez put the #3 prototype on the podium at Road America, and the team scored points in all six races en route to a solid sixth-place result in points.

Whether competing under the banner of Virus, Team DFTBA, or Virtual Motorsport as in season 4, longtime NEO teammates Dennis Gerressen, Marcel Bosman, and Michael Storm, as well as their Dutch compatriots Roy Diederen and Bas Slob, gave a strong showing in their team’s prototype class debut.  The #13 car finished seventh overall with a season-best finish of sixth at Road America.

The mid-pack competition among the prototype field was intense, as evidenced by a three-way tie for eighth in the standings with another team just one point back.  Taking that eighth position was the lone prototype entry for MSP Phoenix Racing, despite some bumps along the way.  The #38 team was caught up in a lap-1 crash at Road America, wrecked out all by themselves at Spa, and had to call in some of their GTE drivers to fill in driving the HPD at Le Mans.  Their perseverance paid off with an automatic invite to season 5.

Formerly championship contenders among the prototype ranks, Team Chimera struggled in season 4, finishing ninth in points.  A combination of bad luck and some mistakes behind the wheel, including crashing while running fifth at Road America, amounted to many missed opportunities.  Their saving grace was a fifth-place result at Le Mans, where Jack Keithley, Joshua Chin, and Simon Trendell alternated triple stints through the long day and night of racing.

TeamGT Freem returned the majority of their lineup from season 3, including NEO veterans Danilo Piazza, Riccardo Schiavon, and Diego Comuni.  The #21 team put together a steady season-long effort en route to tenth in points that included a pair of eighth-place finishes at Motegi and the Nürburgring.

In their first season driving the HPD, the IRDK Endurance #5 prototype finished eleventh in the final standings after a season of close mid-field battles.  Their never-quit attitude was defined by the Road America race, where they fell as low as 19th place before Egil Sandfeld and Marcello Maio drove to a ninth-place finish.

The final automatic invitation for season 5 went to Vendaval Racing, who left their fate in the hands of their competitors by skipping the Le Mans round.  Fabrice Cornelis and Dekota Fripp drove the #2 car to three top-five finishes, but Cornelis’s departure from the team left them on uncertain ground and barely inside the top 12 in the standings after the dust had settled in France.

Narrowly missing the top 12 in points was SimatoK eSport, whose season-best eighth-place finish at Le Mans left them three points behind the final transfer spot.  Also missing out were teams such as BAM Thrustmaster, season 4 newcomer Autobahn Motorsports, and ACME Racing, which scored points in each round, but just not enough to automatically advance to next season.

Such is the challenge of endurance racing: the need to be careful enough to avoid crashes, lucky enough to have issues miss you, and fast enough to finish well.  Even in the oft-delicate HPD, the top teams this season proved that it’s possible to have all three factors on your side over the course of 54 hours of racing.