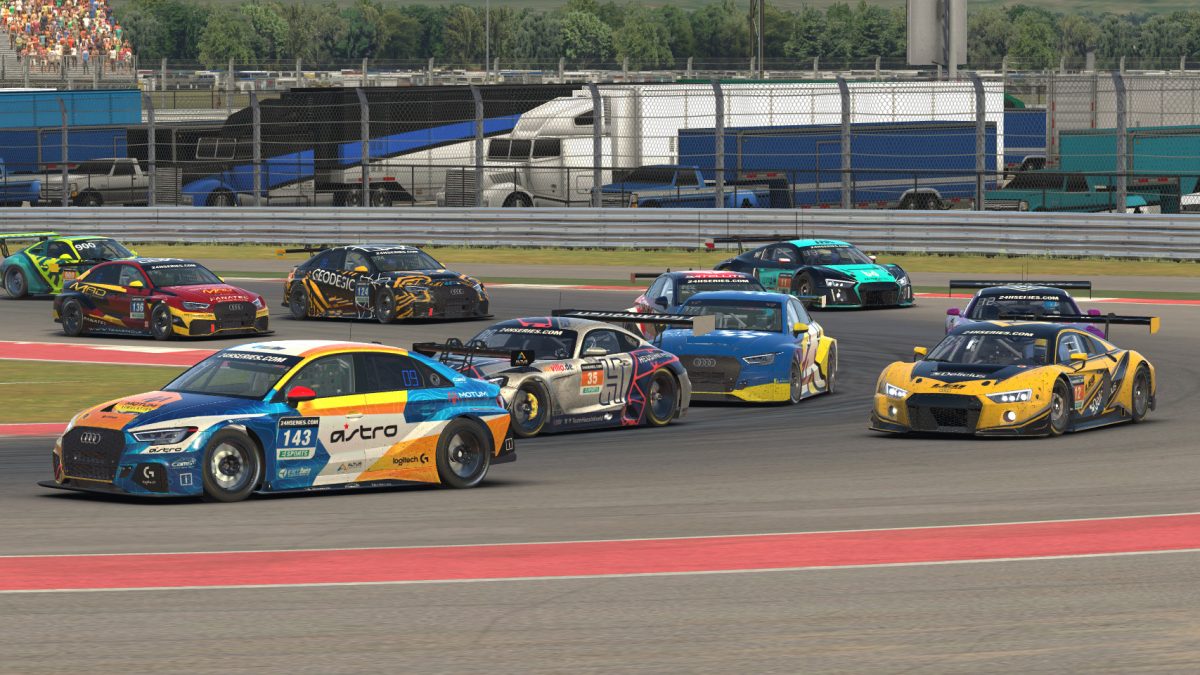 In our latest roundtable with drivers in the 24H SERIES ESPORTS, we discuss the recent 6H COTA and look ahead to Silverstone.

About 15 laps into the race at COTA, all three classes converged in the same part of the track, and there were several spins and crashes. What was your team’s view of these chaotic few laps?

David Barraclough, #181 Torque Freak Racing: Our lap-15 code brown was initiated when the pack we were in came across a Porsche facing the wrong way out of the hairpin, and the two cars directly ahead decided to get very friendly with each other and make it a ménage à trois… Luckily the seas parted just in time and I managed to dodge my way through unscathed!

Dennis Gerressen, #78 Virtual Motorsport: We came through without a scratch, and while it was indeed hectic, we got through fine. I think it did help that we were a bit down the order and were focusing on just finishing the race rather than in a podium battle.

Anders Dahl, #911 Burst Esport: The start incident really helped us in several ways. We obviously got a big gap between us and P3, but going through a large pack is always preferred without having competitors snapping at your heels.

Moreno Sirica, #21 Williams JIM Esports: We’ve been lucky to find the right way without being involved in any crashes, Aldo superbly managed the traffic and was able to throw a dummy move on SRC and gain third place into the esses section, but yeah, it was chaos everywhere.

Miguel Vigo, #124 Alpinestars Geodesic Racing: We were one of the teams that got involved in that wreck, and sadly were just along for the ride at that point. I felt the GT3 class passed us beautifully the first go around, but got a bit aggressive the second time around. There always has to be give and take from all classes and we weren’t seeing that with the GT3s.

There was plenty of post-race discussion about GT3s making late dives under braking. Have GT3s been overly aggressive this season?

Moreno Sirica, #21 Williams JIM Esports: As a GT3, I can say that from the outside, the massive speed differential can make you think that all the GT3s dive in every braking zone or corner, but it’s not like that. For sure it can happen that sometimes you have to force the pass because you’re involved in a battle or another circumstance that makes you push, but I don’t think that GT3s have been overly aggressive during the first two races of the season.

Miguel Vigo, #124 Alpinestars Geodesic Racing: We felt there were only a handful of teams that were a bit overly aggressive in their passing. We didn’t see that in round one, possibly due to the nature of the track. I just think the other classes need to remember that we don’t have the downforce they do and can’t make quick changes in our driving when something unexpected happens. As long as we all understand that, there shouldn’t be any problems.

Dennis Gerressen, #78 Virtual Motorsport: As a GT3 team, we try to be as considerate as possible and I think we’re doing a good job so far. But there will always be moments where, in hindsight, you think you should have waited or realized that your move was on the edge. The difficulty is mostly judging the pace of the other classes. There’s a real difference in how and where you can overtake the faster teams in a class and ones more at the back, or cars that have damage. Where you can make one move stick, the next move might be hairy because they brake 20 or 25 meters later than another team. During the race you’ll learn these things, but you’ll always have to be on guard.

David Barraclough, #181 Torque Freak Racing: It’s a tough one because the GT3s are significantly quicker in the corners than the slower classes, and not just mainly on the straights as you find in most other multi-class esports series. As slower-class drivers, I think we all appreciate that any extra time lost by the GT3 waiting too long for the move will likely never be gained back for the rest of the race. However, when a GT3 dives from such a long way back to the point that both cars are forced off the racing line at apex and both get bad exits, it can be especially frustrating. As the season goes on, I think everyone will get more used to it, so things should improve with some luck.

Miguel Freitas, #136 Team MAD: The GT3s have been as aggressive as the P1s were in past seasons. The problem is that the TCR really isn’t as agile as a GTE car, so a late dive can make us lose one to two seconds pretty easily. On the other side of the coin, a GT3 waiting behind us can lose the same amount. The key for me is being predictable. Diving very late without any warning can end up badly, and we had to dodge some of those dives out of nowhere.

The 991 and TCR classes have each been dominated by a single team so far. What advantage does it seem that MSI Esports and CraigSetupShop have over the rest of the field?

Anders Dahl, #911 Burst Esport: MSI seems to be able to attack each corner on a level where we cannot compete. They have huge amounts of rotation available, yet they manage to keep the car steady.

David Barraclough, #181 Torque Freak Racing: CraigSetupShop have been the fastest over a single lap, and able to go faster on race pace while using less fuel than all the other teams for two races in a row. They are obviously very dialed in with the car, and it’s up to the rest of the field to make adjustments to catch them. Some of the midfield teams were noticeably quicker between the first and second rounds, so if some top teams can make similar gains, I wouldn’t put it past them matching the CSS boys some time soon. But for now, CSS are undoubtedly in a class of one, and hats off to them for achieving that in such a strong field!

Miguel Freitas, #136 Team MAD: CraigSetupShop definitely found something in the car that others haven’t for endurance races. Don’t get me wrong, the drivers are also pretty good, but the way they keep a better pace and keep saving more fuel than others is quite surprising. We have our best engineers working on the case.

Next we head to the new Silverstone for the first time, and like COTA, it has some tight and low-speed sections. What sort of multi-class racing do you think this circuit will produce?

Miguel Vigo, #124 Alpinestars Geodesic Racing: Very similar to COTA. The key here again is that all classes will need to give and take. It’s why I love multi-class racing so much because of the unpredictability. Hopefully all the teams try to overtake cleanly without too much trouble.

Moreno Sirica, #21 Williams JIM Esports: I think that it will be similar to COTA. The tracks both have more or less the same characteristics, but maybe Silverstone have more wide-angle corners that can help the fastest cars overtake around the outside. It will still be hard and demanding as always.

Miguel Freitas, #136 Team MAD: I think this track will be better than COTA to handle traffic. The slow corners are quite short and there are not big sequences of corners that will make traffic lose a lot of time so I believe the faster classes will get by us quicker, meaning that they will be more patient as well.

David Barraclough, #181 Torque Freak Racing: More of the same as COTA, I would think. The Farm/Village/Loops complex on paper seems to be very similar to the COTA stadium section, and both tracks share quite similar esses sections, of course. If I had to call it now, I think things may be a little easier at Silverstone as you can keep the speed up using multiple lines through more of the corners than at COTA, but we’ll just have to wait and see!