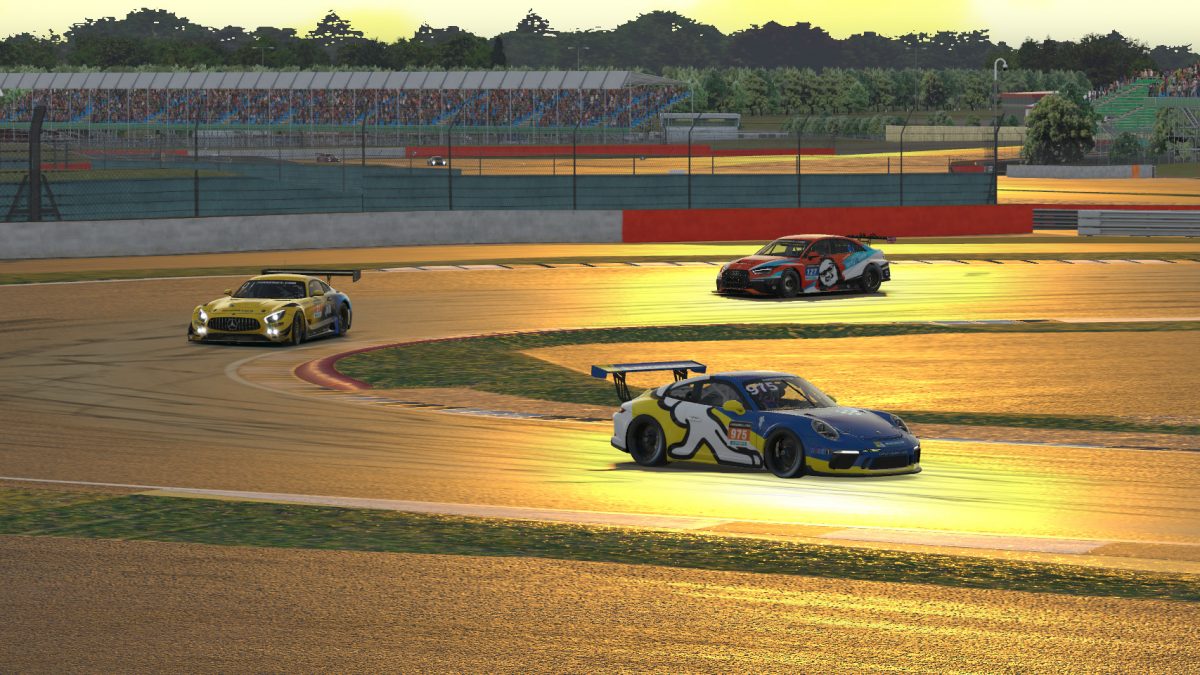 The challenge of endurance racing was on full display Sunday as survival and strategy edged raw speed in settling the 6H SILVERSTONE, the third round of the 24H SERIES ESPORTS season.

In the GT3 class, the Italian duo of Simone Maria Marcenò and Aldo Massa appeared to have Logitech G Altus Esports back to the top of the order, where they spent most of last season in the GTE ranks.

During the first round of TCR traffic, Marcenò got by Lukas Jestädt from Biela Racing Team EURONICS in a three-wide pass through The Loop. Contact between Jestädt and the TCR to his inside sent the #45 car spinning, and a hit from the MSI eSports Audi R8 cost the Spa race winners from Biela a shot at their second win of the season.

While Altus then had the lead, they couldn’t gap the rest of the field, and the Mercedes AMG of Williams JIM Esports managed to keep them close with the duo of Pierre Lisant and Moreno Sirica behind the wheel.

The lead changed hands again during the final round of pit stops, as Williams JIM had stretched its fuel all race and made a later stop without changing tires.

Their 20-second lead seemed likely to be short-lived with Massa chipping away up to a second per lap on fresh tires, but a risky pass attempt on a TCR through Chapel corner sent Massa through the grass and the Altus Audi into the wall on the Hangar Straight.

With their closest opponent severely damaged, Williams JIM came home with the win after their strategic gamble paid off. Altus limped home to the finish, but they lost second place on the final lap as Filip Mitrevski from Ronin SimSport got past them to earn the #99 team’s best result of the season and complete a Mercedes 1-2 finish.

In the 991 class, it was another show of domination by MSI eSports from the green flag to the checkers. Marc Perez and Alejandro Sánchez demonstrated their speed and control in traffic, keeping their Porsche 911 GT3 Cup car completely clean through six hours of racing.

A full 45 seconds behind them, the fight for second in the class came down to the final half-hour. Anders Dahl from Burst Esport had caught Daniel Cruz from Williams JIM Esports Cup, and a mistake from Cruz overshooting Maggots corner opened the door for Dahl to take the spot.

For the second race in a row, Burst finished second while Williams JIM ended its race-long recovery from a first-lap spin on the podium in third place.

The TCR class also came down to the same familiar names atop the scoring pylon. Much of the race was a back-and-forth battle between CoRe SimRacing and the undefeated points leaders from CraigSetupShop.

The two were just seconds apart when the final round of pit stops began, and a shorter stop for CraigSetupShop made the difference, giving them a gap that held through the finish.

It was the third consecutive victory for Jack Sedgwick and Simeon Lynch, and the third straight runner-up finish for CoRe. As at Spa, the final podium spot went to SimRC, who started the race from the pole position.

While two class leaders continued to build their championship leads, the GT3 class is more wide open than ever after troubles for both Biela and Williams Esports at Silverstone. The emergence of Williams JIM, Ronin, and Altus has shaken up the standings at the midway point of the season.

Stay tuned to neo-endurance.com in the coming weeks for additional coverage of the 6H SILVERSTONE, including team and driver insights and class-by-class race recaps.