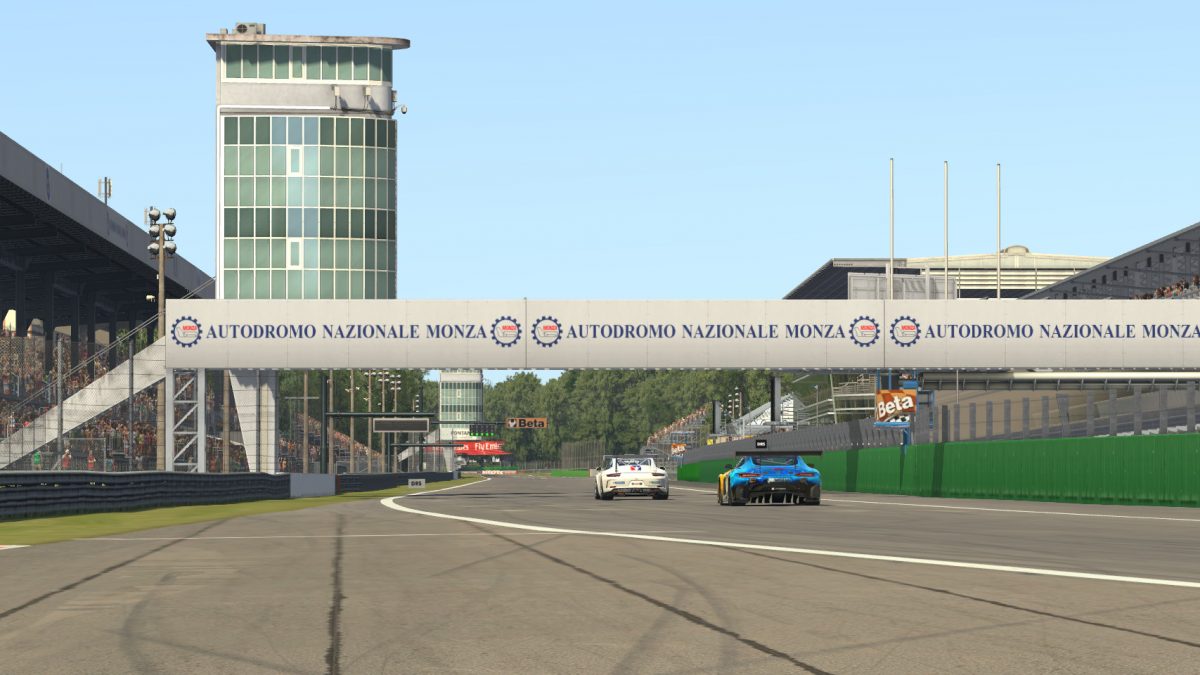 The fastest race of this season is fast approaching, with the 6H MONZA coming up on Sunday. To help us prepare for the second-to-last event of this 24H SERIES ESPORTS season, drivers from each class shared their thoughts about the upcoming visit to the virtual Autodromo Nazionale di Monza.

The NEO Endurance Series made just one visit to Monza, which happened four years ago during season two. It also served as the penultimate round of that season’s championship.

In perhaps a good sign for this season’s points leaders — two of whom remain undefeated — all three of the eventual champions in season two won their class at Monza.

In the prototypes, VRS Coanda Simsport took top honors ahead of Friction Racing and Pure Racing Team. In the GT1 ranks, Mivano Simracing Team including current driver Tommaso Carlà drove their Aston Martin to the victory over Hammer Down Racing and Atomic Motorsport.

For Mivano, the Monza win was a special one in their home country. The three Italian teams on the grid this season — all in the GT3 class — will be hoping for similar success at the second of two Italian venues on the schedule. They each had mixed results in the first one last month at Imola.

Mivano’s race went downhill early after a spin on the second lap. Meanwhile, SRC Squadra Corse made a strong start, qualifying in third, and Leo Racing Team moved from ninth on the grid into podium contention in the second half of the 6H IMOLA.

In the final hour, SRC and Leo made contact while racing for third. Leo came out ahead in that fight, earning their first podium in NEO-sanctioned competition, while SRC was left to finish fourth.

When this season’s schedule was announced, Monza may have seemed like an odd track choice since the real-world 24H SERIES has never raced there.

But that circuit’s inclusion in the calendar — at the request of 24H SERIES officials — soon made sense, as the 2020 schedule for the GT endurance series includes a stop at the Italian circuit.

On March 27 and 28, it will host the next race of the championship, the 12H MONZA, replacing the Mugello Circuit as the second round of the season and the first European venue after leaving a soggy season-opener in Dubai.

With no past history at the Monza for the 24H SERIES, perhaps this weekend’s 24H SERIES ESPORTS event, which airs live on the iRacing eSports Network beginning at 1300 GMT on Sunday, will serve as a preview for the real-world pros as they prepare for their race in less than two months.

Monza is renowned as a cathedral of speed, and even though the oval section has been removed and chicanes have been added to the grand prix layout over the years, it remains one of the fastest tracks in modern motorsports.

A lap at Monza begins with a run down the long frontstretch, which is plenty wide with asphalt extending all the way to the pit wall.

The amount of usable road narrows up past the pit exit and into the hardest braking zone on the circuit leading into the technical Variante del Rettifilo chicane.

The start at Monza could be the scariest of the season, perhaps only trailing the two-wide run down to Eau Rouge at Spa, as each class will look to avoid contact while braking for and navigating the first few corners.

The survivors will live on to race down another long straight through the Curva Grande and into the Variante della Roggia. This chicane is faster than the first but also potentially more difficult, as carrying maximum speed requires testing the track limits, avoiding slowdown penalties, and abusing the kerbs.

The medium-speed Lesmo corners follow and lead onto yet another long straight that travels under the disused oval banking. One more chicane — the Variante Ascari — awaits competitors, and they’ll have to weave between its raised kerbs and set up for a speedy run onto the backstretch.

The final corner is the famous Parabolica, which requires precise braking and a bit of bravery on throttle application to maximize exit speed while not overstepping the track limits. After 20 off-tracks, teams will receive a warning, and for each successive 20, they’ll earn a 20-second time penalty.

Our driver representatives don’t point to any specific corner at Monza as being particularly important. Maybe that’s because they all are!

“Monza is one of those tracks where there are very few actual corners, but each of them is much more important because of the huge amount of straights following them,” said Anders Dahl from Burst Esports.

One of the most challenging parts of Monza’s corners are the kerbs — a topic that also came up when previewing the last race at Imola. And while there are some similarities, there are also some differences from one Italian track to the other.

“Like Imola, also in Monza you need a very good and stable car on the kerbs,” said Moreno Sirica from Williams JIM Esports. “Compared to Imola, I would say that mechanical grip is slightly more important here, and that’s because of traction that you need out the chicanes since you don’t want to lose top speed on these long straights.”

For the lower-horsepower TCRs, carrying maximum momentum will be crucial, so getting through the corners quickly will be a priority.

“The ability to keep the speed and stability over the kerbs is important, since after that are long straights where top speed is needed,” said Miguel Freitas from Team MAD.

Monza’s unique layout means teams aren’t too worried about traffic this round — or, perhaps, other factors could play an even greater factor.

“The last few races were mostly about traffic, but I think that this round will be more on the tactical and strategic side compared to the others,” said Sirica.

For the Silverstone winner whose Williams JIM team used a bit of strategy — a fuel-only stop late in the race — to take the lead, Sirica expects Monza’s higher fuel usage and the potential for more tire change gambles could also help determine the result.

“This will be a different story from the previous races, at least I think. I can’t say a lot now because we all know that strategies can change a lot during the race, but for sure is going to be interesting.”

In the lower-downforce 991 class, the race looks to follow the mold of others this season with little room for tire strategy.

“With the super-fast and high-energy traction zones, I’m afraid the Porsche just won’t be able to make the double-stint viable,” said Dahl, who did successfully stretch his tires across two full runs to start the race at Imola.

“Both Lesmos, Ascari, and the mighty Parabolica simply destroy the left rear tire. Fuel strategy should be quite simple as well: full throttle and maybe 90% fuel for the final stop.”

And in the TCRs, Monza could be the most entertaining race this season because of the power of the slipstream down the long straightaways.

“We are looking at this race from all possible angles and we will try to come with a good plan, but for sure I am expecting some surprising strategies, especially from teams that manage to stay in the draft for long periods,” said Freitas.

“This race’s biggest key to success will be the ability to break the draft from the cars behind and keep the draft of the cars in front. That’s our plan!”

But even the sharpest pit strategy or shrewdest draft dodging won’t matter without raw speed, and there are few modern circuits with as much speed as Monza.

Perhaps the biggest key to victory, then, will be simply going fast.