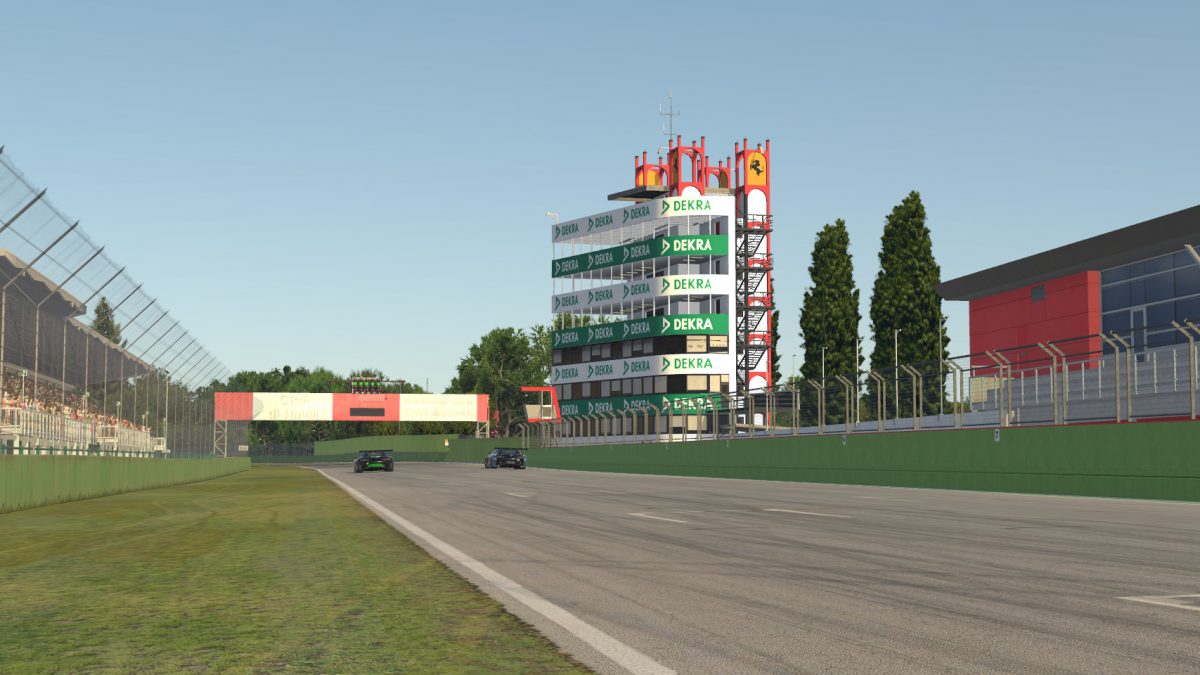 The new year brings a new venue for the 24H SERIES ESPORTS. In its sixth season, NEO’s endurance championship is set to visit the virtual counterpart of the Autodromo Internazionale Enzo e Dino Ferrari in Imola, Italy, for the first time.

Before the field takes to the track for Sunday’s 6H IMOLA, our team and driver representatives from each class are helping us preview the circuit and the race at this season’s midway point.

In NEO’s history dating back almost seven years, it has sanctioned just one race at Imola. A one-off special event, the Motorsport Safety Foundation 1000, was held in July 2016 between endurance series seasons two and three.

That race used the previous-generation V8 Supercars, and unsurprisingly, it was a pair of Aussies — Ian Ford and Jake Blackhall — earning the victory for Evolution Racing Team.

A familiar name on this season’s grid finished in a familiar position in that event. CoRe SimRacing, which has placed second in the TCR class in all three races so far, finished second in the MSF 1000 with Thomas Arends and Santerri Kallunki driving the team’s Holden Commodore.

The final podium position in that race went to Heusinkveld CORE Motorsports, whose three-man lineup included Kay Kaschube and Alexander Voß — both now with the GT3 points-leading Williams Esports team — along with Nils Koch.

Among the vehicles that will contest the 6H IMOLA, we can look to recent iRacing official races to find some drivers with experience and success at the track.

The VRS GT Endurance Series visited Imola during week 10 of 2019 season three. In that Saturday’s race, two competitors on separate teams for this 24H SERIES ESPORTS season teamed up to take third place.

Mats-Thorge Huthsfeldt from Team Heusinkveld and Luca von Leitner from Team RSO drove their Ferrari 488 GT3 onto the podium. Although they’ll be in different cars, on different teams, and with two other classes on track this weekend, they both have plenty of laps around the circuit after their successful showing last summer.

The Porsche iRacing Cup series also visited Imola in 2019 season three, and several of this season’s 991 class drivers performed well that week. Among them, Colin Duenker from Huber Racing E-Sports took top points among all entrants with four wins in seven starts.

Second in points with three wins out of four starts was Nick Madsen, who runs with HM Engineering — a newly announced team that includes many of the drivers from Avid Chronic Racing.

Eero Tuominen from Inertia SimRacing has already proven to be an ironman at Imola, scoring fourteen wins out of fifteen starts to earn the fourth-most points of all drivers during that week of the Porsche iRacing Cup. With hundreds of laps already under his belt, Tuominen should be able to get up to speed quickly.

For the TCR class, this weekend’s race will be a bit of a venture into uncharted territory. The official Michelin Pilot Challenge Series has not yet raced at Imola, but will visit the track in week 12 of the current season.

That means many drivers will get their first taste of competition at the Imola circuit from the friendly confines of their front-wheel drive Audi RS 3 LMS TCRs when free practice begins on Saturday.

The following year, Herberth Motorsport earned the overall win in their Porsche 911 GT3 R, while IDEC Sport Racing was second in their Mercedes AMG GT3. Ebi Motors was first among the 991 entries, and LMS Racing by Bas Koeten Racing won the TCR class in their Cupra.

Historically, Imola’s flowing layout has been interrupted by a number of chicanes introduced in the name of safety. Getting through some of those tight turns with three different classes on track could be challenging, so some teams predict a chaotic race.

“This track is shorter and narrower than the previous tracks, and I find that some of the corners are quite easy to make a mistake in, so I guess the stewards will have a busy race,” said Joakim Vennström from GOTeam Racing in the 991 class.

While touring cars are designed for door-to-door racing, teams will look to avoid that sort of contact during a six-hour race.

“We will try to keep away from rubbing doors with other classes,” said Miguel Freitas from Team MAD in the TCR class. “This is a small track for three classes at the same time, so we have a big challenge to be able to make a good result!”

Whether fighting for a position or trying to get through traffic, teams may have trouble finding spots to make a move around Imola.

‘This will be one of the toughest tracks on the calendar, since there are really few places for a clean pass,” said Moreno Sirica from Williams JIM Esports, the Silverstone winners in the GT3 class.

The best passing opportunities may come on the track’s longest straightaway, so getting the Rivazza corners right will be a key to making moves.

“The most important part of the track will be the last corner,” said Frietas. “The start/finish straight is the overtaking point in the Audi, so a bad exit will be dangerous.”

Track limits may not be as big of a concern at Imola as at Spa or COTA, but our other team representatives point to a unique part of this circuit that could still punish anyone pushing too far.

“The kerbs are very easy to get wrong,” said Anders Dahl from Burst Esport. “Best case, you lose two tenths. Worst case, you get launched into the gravel trap.”

Teams may need to spend some extra time in the garage to make sure their cars can handle those kerbs.

“The most important part will be to get the setup right so it eats kerbs quite well without losing too much time on the rest of the track,” said Michael Drechsler from Huber Racing E-Sports in the GT3 class.

Last month’s 6H SILVERSTONE saw the fewest penalties of the season for contact between classes, so are competitors finally getting comfortable with the current car lineup?

“For sure drivers and teams are slowly getting used to the new format and class combination, but I think that also the track helped a bit in this case,” said Sirica. “Silverstone is a very well-suited track for multiclass racing.”

Added Freitas, “there were fewer incidents but I would say it was luck together with the fact that there was a lot of runoff.

“For Team MAD, we were looking to save fuel and hit our target lap times, so we were giving a lot of space. If we were on a normal strategy pushing to the limit, I would say we would have banged doors a couple of times.”

One of the most controversial moments at Silverstone occurred the first time the GT3s reached the TCR field. A lead battle between Logitech G Altus Esports and Biela Racing Team EURONICS eventually sandwiched Alpinestars Geodesic Racing in a three-wide run through The Loop, which ended in contact that sent Biela’s Audi spinning.

Officials ruled it a racing incident, and Freitas said it was tough to place extra blame on any of the teams involved.

“I think the officials made the right decision there,” he said, “but making it three-wide there is a big risk. We were the TCR right behind and we almost got caught in the crash. I would say that the GT3 cars should be more patient, but in the end it is a race and all the drivers go for the gap.”

As those gaps become even narrower, some drivers expect more contact this weekend.

“Silverstone is quite easy for traffic management, I’d say,” per Drechsler. “The tides will turn at Imola for sure.”

As the calendar turns to 2020, we’ve reached the midway point of the season, which offered teams a chance to reflect on their performance so far and set their goals for the second half.

For Williams JIM Esports, the most recent winner in the GT3 class, expectations are building for the final three races of the season.

“We entered the championship with a top-five target. We knew that was possible and in the last two races, we showed our pace,” said Sirica.

“But after the win in Silverstone and looking at the standings, we want more and raise our goal to a top-three. Let’s see how things will evolve, but we will certainly fight for it.”

Burst Esport has been a model of consistency so far, with three podiums in three races. They look to find more speed in the second half of the season.

“At Silverstone, we managed to break away from the teams fighting for a podium,” said Dahl. “Obviously no one has an answer for MSI yet, but we are working on it!”

With some sneaky but successful pit strategy up their sleeves, Team MAD managed their best result of the season at Silverstone. However, they say they still have work to do to compete with the top TCR teams on pace alone.

“To be completely honest, we are not as fast as we thought we would be,” said Freitas. “We have been racing touring cars for a long time, and we were expecting to be more competitive.

“We are improving a lot between each race and a fifth-place at Silverstone shows that, but we are still working in getting our pace closer to the top guys.”

For the Huber Racing E-Sports GT3 team, the season started with a seventh at Spa, but they’ve failed to score points since then. Getting their season back on track could be as easy — or difficult — as shedding some of their recent bad luck.

“Results like we achieved in Spa are our target for sure. Unfortunately we got pretty unlucky in the second round at COTA, and at Silverstone in round three, we simply got killed and robbed of a good result,” said Drechsler.

“The overall racing in the season so far is as expected, and quite competitive. So we will keep working for some good results in the second half of the season.”

The new year for 24H SERIES ESPORTS racing begins on Sunday, and coverage from RaceSpot on the iRacing eSports Network starts at 13:05 GMT with qualifying and continues at 14:00 GMT with the green flag for the 6H IMOLA.

From Tosa to Tamburello, it’s set to be a rough-and-tumble race with close quarters between classes. Whether you’re behind the wheel or tuned into the broadcast, don’t miss any of the action from Imola!