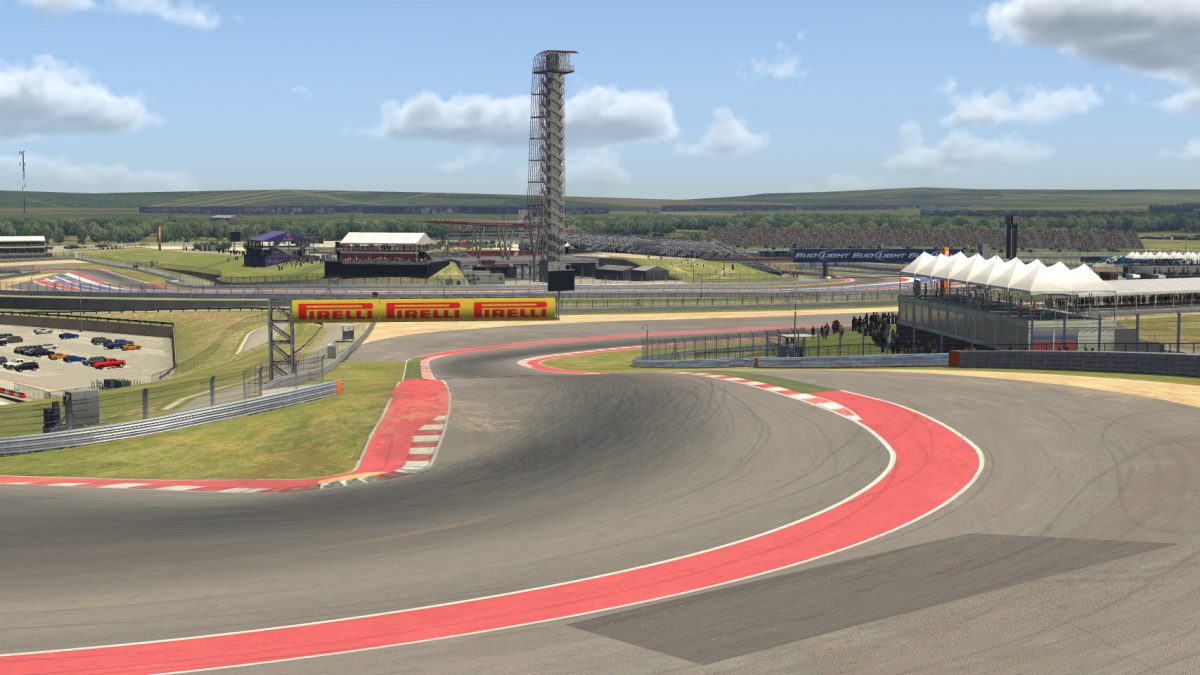 Some drivers love it, some drivers hate it, but this weekend, they all have to race it. Circuit of the Americas is up next on the 24H SERIES ESPORTS schedule, and with the help of our team representatives, we’ll preview the second race of the season.

Although it was opened only seven years ago, COTA has already hosted nearly every type of vehicle on two and four wheels, from MotoGP to Australian Supercars to the World Endurance Championship to, of course, Formula One and its flagship United States Grand Prix race weekend.

In its four seasons on the NEO Endurance Series schedule, a variety of prototype and GT cars have visited the virtual circuit, and this weekend, touring cars will join the diverse crowd of cars to compete at COTA in the top-level endurance championship.

The current field includes eight past winners at the track dating all the way back to season one. SuperSport Racing claimed its only NEO win in the GTC class five years ago, and two drivers from that team, Andre Castro and Gresham Wagner, are back this season as part of the newest entry on the grid, replacing the withdrawn Alpinestars Geodesic Racing team in the 991 class.

In season two, Jack Keithley and Ben Tusting drove Team Chimera and its HPD ARX-01c to the prototype-class victory. This season, they’re on separate TCR teams, with Keithley driving for Williams Esports while Tusting returns with Team Chimera.

NEO’s only two-time COTA winner is Tommaso Carlà, who triumphed with Mivano Racing in the GT1 class in season two and the prototype class last year. He will look to add a GT3 win to his résumé with Mivano this season.

In season three, Marius Golombeck took the GT win as part of Torrent Motorsports. He’s back this season in CoRe SimRacing’s TCR entry. And last season’s GTE winners from Logitech G Altus Esports also look for a return to victory lane in Austin, this time on separate entries. Yannick Lapchin will be in their GT3 Audi R8, and Andrew Kahl will be in the Audi RS 3 LMS TCR.

NEO’s real-world counterpart, the 24H SERIES GT championship, will visit COTA next weekend to crown its own winners in a 24-hour race. This will be the third running of the enduro, which last year was won by the likes of Black Falcon’s Mercedes AMG GT3, JDX Racing’s Porsche 911 GT3 Cup car, and LMS Racing in its Cupra TCR DSG.

With F1 at COTA last weekend and the 24H SERIES competing there next weekend, NEO is effectively the meat in the sandwich among a busy month at the Texas circuit, in both its real and virtual versions.

Those latter two complexes make up much of the final sector at COTA, and teams in all three of this season’s classes say it’s the most important part of the track to get right.

“With its slow, twisty section, then long sweeping right-hander, it puts the tires under a lot of work,” said David Baker from the Team MAD TCR entry. “Working with traffic in that section will be key to minimizing time lost for all involved.”

The GT3 teams, which will be doing most of the lapping on Sunday, also worry about how traffic might play out in that final sector, along with making sure they hit those technical turns correctly to get a good grid spot.

“The last section of the track is really important to get right for both qualifying and the race, and it will also be tough to find a gap in the traffic,” said Moreno Sirica from Williams JIM Esports in their Mercedes AMG GT3.

Our 991-class team representatives pointed out two reasons those tight turns might be challenging.

One is tire wear in the downforce-starved Porsche 991s. Anders Dahl from Burst Esport mentioned the difficulty of  “managing the hairpins, especially on worn tires.”

“The track is wide, so I find it more difficult to see if I’m holding the right line and hitting the apex in the tightest hairpins,” he said.

COTA’s long straightaways do offer some extra-wide braking zones, and last season, faster class cars weren’t shy about making passes on corner entry. Those are also some of the slowest corners on the track, so over-eager drivers may overshoot the corners and take to the Texas-sized runoff areas to recover.

That paved runoff makes it tempting to test the track limits, but teams accumulating 25 or more off-tracks will warrant a warning, with each additional 25 earning them a drive-through penalty.

In last month’s 6H SPA-FRANCORCHAMPS, which also used a 25 off-track threshold, six drive-throughs were handed out for track limits violations, including four to the Sorg Rennsport eSports TCR team.

Challenges in Each Class

There’s a reason why COTA is a favourite of skilled endurance racers and dreaded by the less-disciplined among our ranks. Its variety of corners and the often-hot track temperatures make it one of the most difficult tracks on the schedule, especially when the element of traffic is added in.

In the GT3 class, managing that entire combination well could result in a strong finish.

“COTA is a very demanding track in terms of lines and driving, and one mistake can cost you a big loss in terms of lap time, so staying consistent and clean in the traffic will be the key for us,” said Sirica.

Their superior cornering speed also makes patience a virtue in this race.

“The biggest challenge is going to be traffic management since the other classes will be very slow in certain parts of the track,” said Michael Drechsler from Huber Racing E-Sports. It will be important for us to keep cool and not overestimate anything.”

As at Spa, Porsche teams are looking at a four-stop, five-stint race at COTA. But hitting your marks for more than an hour at a time is even more difficult than it sounds at the Texas track, and it could separate teams over the course of a run.

“Strategy should be straightforward, but keeping the consistency through the stint could be difficult,” said Dahl. “Small mistakes easily cost several tenths.”

In some ways, TCR teams will have the worst of all worlds at COTA: the most traffic, the most severe tire wear, and the strategy questions that surround when to pit and what service to take.

“As always with a front-wheel-drive car, the biggest challenge will be managing the tires and the strategy around them, particularly if its a hot race,” said Baker.

“Being in the slower class will also present its own challenges, especially going through the esses section on used tires with a hard-charging GT3 machine breathing down your neck.”

“Unfortunately, there is no wing setting adjustment, so we’re kind of limited in tuning for straights versus corners in that regard,” added Baker. “Instead, it all comes down to mechanical grip and how much you’re willing to take out of the tires at various parts of the stint, so I would say it is more of a driving compromise than a setup one.”

Who, What, and When to Watch

The Spa race established some clear favourites early in the season, and unsurprisingly, the top teams in the season-opener are expected to find more success at COTA.

“Biela Racing Team EURONICS was already at the top in the SCO GT Series, which took place in the summer,” said Dreschler. “They have incredible driver lineups in their cars and they showed what they are capable of in round 1.”

Of course, the challenges of COTA could trip up any team or provide an opportunity for a new winner to emerge.

“For sure, Biela and Williams Esports showed impressive pace in Spa, but endurance races are always unpredictable,” said Sirica. “There are many other teams ready to grab a spot in case of a mistake, and we are ready to fight for it.”

Likewise in the TCR class, a few teams rose to the top after a draft battle to start at Spa, but with the potential for penalties, crashes, and tortured tires, anything could happen at COTA.

“As always, you’ve got to look at the CraigSetupShop, CoRe SimRacing, and Apex Racing Team, but the TCR can undoubtedly spring surprises,” said Baker.

“It’s my first run in the car due to being unavailable at Spa, hopefully we might be one of them.”

The RaceSpot coverage from COTA kicks off on Sunday at 1305 GMT with qualifying for all three classes, broadcasted live on the iRacing eSports Network.

That’s followed at the top of the hour with the green flag to start the 6H CIRCUIT OF THE AMERICAS. It will be a full afternoon of racing, and on a tough track with three competitive classes, it’s sure to be a Wild West-style shootout on Sunday.