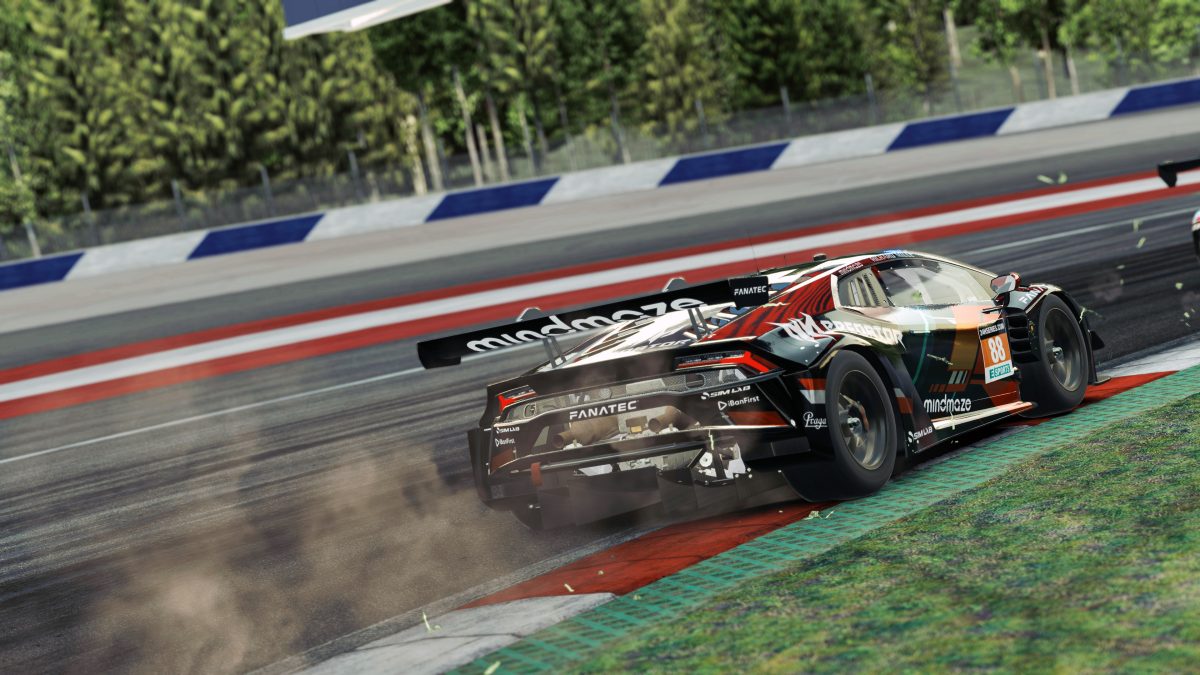 Vlad Khimichev and Racim Fezoui recorded their first win of the season for the R8G Esports team at the third race of the 24H SERIES ESPORTS powered by VCO and in doing so completed a hattrick of podium finishes from the opening three rounds. The Russian/Canadian driver duo’s victory has also promoted the #88 R8G Esports Lamborghini Huracán GT3 EVO into the lead of the championship at the halfway point of the season.

Khimichev and Fezoui crossed the line just over 14 seconds ahead of the BMW M4 GT3 from Williams Esports. Third place went to the second Williams-run GT3 entry, the MAHLE Racing Team Porsche 911 GT3 R, which had started the race from pole position alongside its teammate. The two Williams cars ran the first handful of laps in first and second, but halfway through the first stint Khmichev made his way past Daniel Lafuente in the BMW and Sota Muto in the Porsche to take the lead after 40 minutes. R8G’s first pit stop was shorter than the other frontrunners’, which broke the Lamborghini free from the pursuing pack and from there the French team did not have to give up the lead aside from the #78 PRT Ronin SimSport team running a different strategy which placed it in the lead for a handful of laps.

Behind the podium, the top 6 was in close pursuit with the first six finishers covered by just 36 seconds after 239 laps around the virtual Red Bull Ring. The #46 Biela Racing Team EURONICS Lamborghini came home in P4 with the recently rebranded Team75 Bernhard by SimRC Porsche in fifth. Round 1 winners MSi eSports completed the top 6.

In the 992 class, the #905 Williams Esports took a long-awaited victory after finding trouble early in the two races so far. Asetek Simsports Volante and CoRe SimRacing rounded out the podium. But with an hour to go, no one would have been able to make a confident prediction on the podium places, including who the eventual winner would be. During the first half of the race, it looked to be normal service resumed as Jordan Caruso in the Logitech G Altus Esports entry opened up a lead on the rest of the field. But towards the end of the race, that lead had disappeared again at the hands of Josh Thompson and Anders Dahl in the Williams and Volante entries respectively. A three-way dogfight ensued between Thompson, Dahl and Beau Albert who had taken over the Altus car.

The Manxman muscled his way past the Australian to take the lead and then had to fend off the Dane, which he did with rigour, but to the disappointment of the viewing audience the battle was cut short following contact between Dahl, Albert and Vasilios Beletsiotis in the BS+ COMPETITION BMW M4 GT3. Beletsiotis misjudged the braking point of the 992 cars into the tricky downhill T9, and ran into the back of the Altus cars which in turn made contact with the Volante car. As both cars spun off, the Williams car came through unscathed and was ultimately able to drive to the chequered flag unchallenged. Dahl did his best to close the gap again, but it was too big of a deficit to overcome. Due to the damage done to the Altus Porsche, Albert’s laptimes dropped off and the CoRe SimRacing entry was able to catch and pass for the remaining place on the podium.

After the chance of victory was taken away from Team Fordzilla last time out, fortune smiled upon the official Ford esports team as they were able to take their first victory of the season in the GT4 class. Their car was involved in a Lap 1 Turn 1 incident, but came away unscathed while three other cars were delayed. This also meant gaps opened up quickly in the GT4 class. At the end of the race only three cars finished on the lead lap in the class, with Carbon Simsport in second and Asetek Simsports Volante in third. Early leaders Puresims Esports crashed out of the race following contact with the GermanSimRacing.de by ACV BMW M4 GT3, and championship leaders and winners of the first two races were involved in the previously mentioned Lap 1 Turn 1 incident. All in all, this was a race to survive for the GT4 teams.

In the smallest class of the field, the TCR class, CoRe SimRacing grabbed their second win of the season to put them back in the lead of the championship. This is only by a small margin though, as Team Heusinkveld and MSi eSports are only one and three points behind respectively. In the race MSi eSports finished second with Impulse Racing rounding out the podium. Out of all the classes, this class had the largest winning margin by over 50 seconds as Corentin Guinez and Kieran Harrison put in the same dominant performance as they did at Hockenheim.

The next round of the 24H SERIES ESPORTS powered by VCO takes place on 13th February 2022 at the Autodromo Nazionale Monza. The titles will be decided on 17th April 2022 in the 12-hour race at Spa-Francorchamps.

Racim Fezoui (R8G Esports, GT3 winner): “Our strategy paid off. We decided to concentrate on racing qualifying laps in the second half of the race instead of saving fuel, as that cost us too much time. With regard to the championship, we are benefiting from scoring points very consistently and we are only looking ahead to the next race. We are always very well prepared.”

Josh Thompson (Williams Esports, 992 class winner): “From our point of view, that was one of the best races for a long time. We never gave up and were able to close the gap to the leaders in the final stage. It’s a shame that it ended like that. I don’t know exactly what happened in that crash behind me. I was only told that the cars behind went off the track.”

Will Chadwick (Team Fordzilla, GT4 class winner): “That was a very good weekend! I am very sorry for the Puresims team. They were in the lead when they got involved in a crash. Our pace was very good, but I can’t say whether we would have been able to overtake them on the track.”

Corentin Guinez (CoRe SimRacing, TCR class winner): “Right at the start, it was all about surviving the first waves of GT3 and Cup cars, which went well. Then I noticed that being in the lead with clear track allowed me to pull away significantly from the cars behind so I really pushed on and handed the car over safely to my team-mate. This win gives us a lot of confidence.”

TFRLAB provides a Laptime Summary of each of the 24H SERIES ESPORTS powered by VCO races. If you want to have a closer look at the data from the 6H Sebring, check out their Summary here: TFRLAB | Laptime Summaries