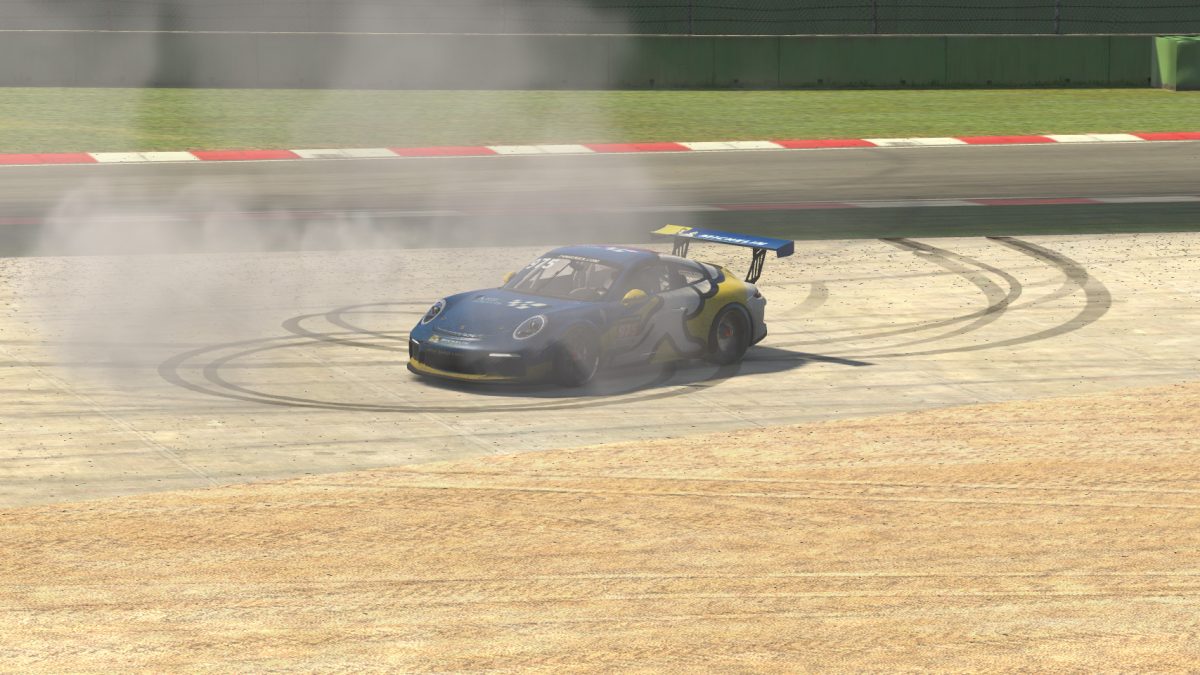 Earlier this season, a near-crash for MSI eSports in the first round at Spa-Francorchamps seemed to show that even top 991-class teams weren’t immune to disaster, especially while racing through the often-hectic mix of GT3 and TCR traffic.

But after three wins and no more dings on the fenders, it appears that MSI’s close call at Spa was an exception to the rule — and they have absolutely ruled the 24H SERIES ESPORTS’ middle class with an iron fist thanks to the unmatched speed and stealthy maneuvering of Marc Perez, Alejandro Sánchez, and Salva Talens.

But last Sunday’s 6H IMOLA would offer perhaps the best chance this season of race-derailing contact, as the short length and close confines of the Autodromo Enzo e Dino Ferrari could put even the best teams outside their comfort zones or inadvertently inside someone else’s crash.

For MSI’s competitors, it’s beginning to seem like such an unlucky break for the championship leaders is their only chance of getting past the indomitable #975 Porsche 911 GT3 Cup car.

Their superior pace was again evident in qualifying, as Sánchez topped the time charts by more than half a second over Burst Esport’s Anders Dahl and DV1 TRITON Racing’s Dawid Nowakowski.

The first stint didn’t give the rest of the 991 field much hope either, as Sánchez managed another great getaway, taming the Porsche’s cold tires and getting up to speed in a hurry.

That wasn’t the case for all Porsche teams. For the second straight race, the Williams JIM Esports Cup M #908 car was involved in a first-lap incident. This time, it was a solo spin through Tosa while battling with F4H Racing and TNT Racing.

The following lap, TNT’s Paul Darling would fall to the back of the field himself after a braking-zone lockup entering Tamburello ended with a run through the gravel trap.

Once tires came up to temperature, the fights were on throughout the 991 field — or at least behind the fast-escaping Sánchez.

Dahl initially faced a strong challenge for second place from Kieran Harrison of the new HM Engineering team. Once the 991s hit TCR traffic for the first time, Harrison dropped back and into the clutches of Nowakowski. His own grass-clipping mistake entering Tamburello on lap 15 handed third to TRITON, while F4H’s Ashley Finch lurked in fifth.

But Finch’s own race hit a literal wall just six laps later, when a late dive entering Piratella by a GT3 car sent the F4H Porsche through the gravel and right-side headlight-first into the tire barrier.

That allowed two other teams to get through: Inertia SimRacing, whose Eero Tuominen picked up two spots from seventh on the grid, and the Williams JIM Esports Cup #991 team, seeking to build on its fourth-place finish at Silverstone.

The first stint proved to be an eventful one throughout the Porsche field. Colin Duenker from Huber Racing E-Sports spun in TCR traffic, Marcello Maio was caught up in a similar incident later that same lap, and Rafal Drzaszcz from Chartwell Racing ran off-track during his eighth-place battle with GOTeam Racing.

After the first round of pit stops, the running order had a different look than at the start of the race, including — surprisingly — at the top of the leaderboard.

A fuel-only stop for Burst put Dahl ahead of MSI, and while Sánchez’s pace on fresh tires was superior, Dahl managed an achievement we haven’t yet seen from anyone but MSI this season: entering a cycle of pit stops in the class lead.

But that success was met with misfortune during those stops. After Harrison Finch climbed in the car for Burst, he had to make a second trip down pit road to complete their fuel service.

As a result, Burst fell from the lead back to fourth while MSI’s Salva Talens took over out front. TRITON’s Piotr Jagodzinski inherited second place and Tuominen, continuing Inertia’s alternating single-stint strategy with teammate Dani Korpi, moved up to third.

Behind them, Daniel Cruz resumed the fight for Williams JIM Esports Cup in fifth ahead of Ian Gagnon-Renaud for F4H, whose Porsche continued to lap with a dented front fender after their early contact. A fuel-only second pit stop for Huber’s Dennis Arras-Fabry also helped with the #988 team’s recovery drive, elevating them to sixth.

As the race neared the halfway mark, the battles near the edge of the top ten became the ones to watch. HM Engineering suffered a pair of early penalties but climbed three spots to ninth after a strong stint from Norbert Leitner.

It was also a difficult stretch of the race for several teams. Williams JIM Esports Cup M’s #908 team took two penalties and had a spin over the kerbs at the Villeneuve chicane to send them to the tail-end of the field.

Gold Racing Team also spun off-track on cold tires in the second stint, keeping them near the back after they suffered early damage in a collision with IRDK’s car in the Variante Alta chicane.

That season-long theme of contact for 991 teams continued at Imola, seemingly for everyone except MSI. In Burst’s drive back to second place, Finch braked too late behind TRITON entering Rivazza and pinballed into Team Chimera’s TCR, earning a penalty for the #911 team.

As it has been in every race this season, the win was essentially sewn up entering the final hour — some 991 drivers might argue it happened much earlier in the race — with Talens more than a lap ahead of second place.

The GTE team that couldn’t find a way to win last season has morphed into the 991 team that can’t be beat this season. No matter the combination of drivers, MSI has found nothing but success, and with potentially the most difficult track for traffic out of the way, an undefeated season now seems like a strong bet.

The team with the best chance to stop them may be Burst, and while bad luck like their fueling failure or unforced errors like their contact in traffic have been setbacks, their second-place result at Imola seems to confirm that they’re the clear second-fastest team on the grid.

With so much chaos around them, the final podium position at Imola was solidly within Inertia’s grasp. More than 30 seconds ahead of fourth place, Tuominen had the pace to hold third place approaching the final hour. But an error of his own hopping the kerbs at Tamburello sent the #900 car off the road and into the tires, resulting in race-ending damage.

That lifted the Williams JIM Esports Cup #991 car of Cruz and Jorge Blasco Valls into third, where they remained to take their first podium of the season.

TRITON slipped back to fourth at the checkered flag while GOTeam Racing, despite sporting some damage from contact during the race, had its best performance of the season. Henrik Lindoff, Robin Östlund, and Joakim Vennström combined for a fifth-place finish, which moved the #907 team up to seventh in the class standings.

F4H also earned a season-best result of sixth, even after their early trip into the tire wall. HM Engineering’s own damage and penalties cost them a chance at a potential podium, but their seventh-place finish helped the team — formerly Avid Chronic Racing — maintain fourth in points.

Huber’s up-and-down day ended in eighth while TNT’s eighth-place qualifying run was thwarted by their second-lap slide through the gravel. Paul Darling and Andy Runolfson brought their car home in ninth.

In another case of first-stint incidents setting the tone for a team’s race, IRDK Endurance had trouble moving forward after their early spin. They finished eleventh ahead of Gold Racing Team, another member of that lap-13 rendezvous at the chicane.

The final three 991 teams failed to finish. Inertia’s promising run ended in a crash, and Williams JIM Esports Cup M parked their car with 90 minutes remaining. SRN Motorsports was the first retiree after suffering a blown engine in the second hour.

Some Porsche teams have a long list of reasons for retirements, lost positions, and points they missed out on this season.

For others like Burst Esport and Williams JIM Esports Cup, minimizing those issues has shown podium potential.

But for MSI eSports, it seemed their Imola race only went off-track one time: when turning victory donuts after another six hours of successful, unblemished driving.