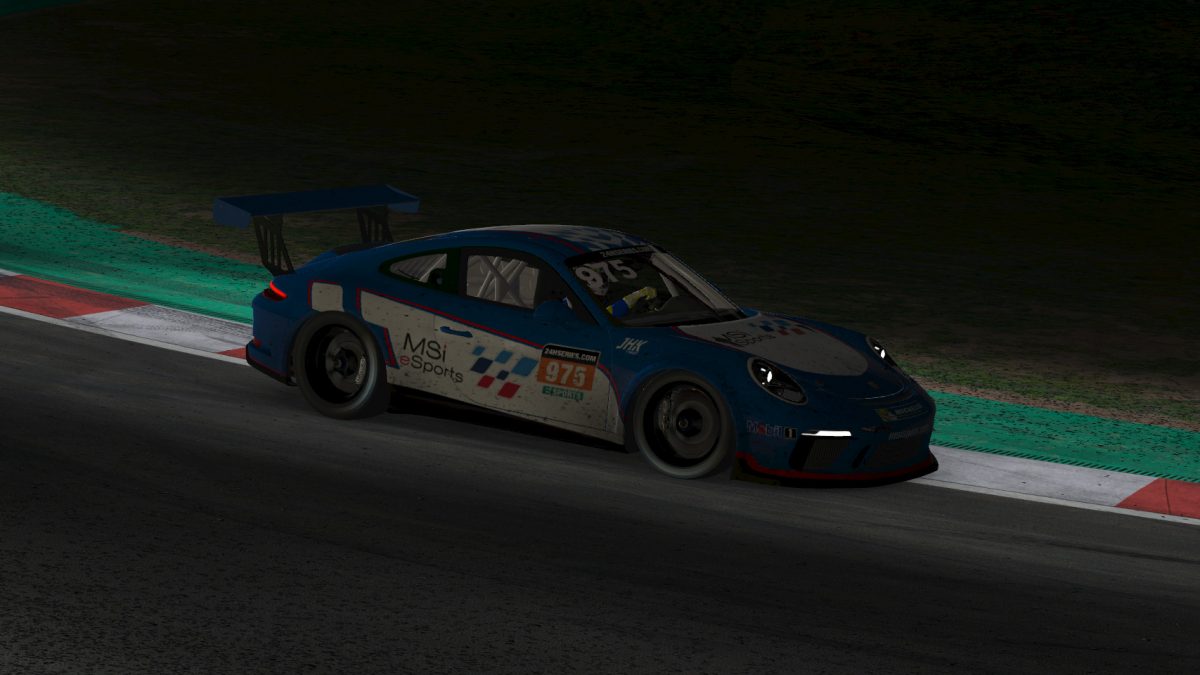 In a multi-class endurance championship, it can be easy for the middle class to get ignored, especially given the lineup in this 24H SERIES ESPORTS season.

With the faster GT cars fighting for overall wins in the top class and the shiny new draft-locked TCRs in the lowest class, the 991s were stuck somewhere in the middle.

That meant it would take something big and attention-grabbing to shift the focus to the Porsche 911 GT3 Cup cars, and MSI eSports — already awarded the class championship after the last round at Monza — set out to do exactly that last Saturday at Barcelona.

They had the rare opportunity to wrap up a perfect season, with six wins in six races. And in the Spanish team’s home-country race at the Circuit de Barcelona-Catalunya, they had extra incentive — and perhaps a bit of home-field advantage — to perform at their best.

It had already been a season where commentators and competitors alike have praised their performance and pace, along with their lack of mistakes and penalties that made them unstoppable in their class.

The Barcelona race proved to be the final chapter in that story: A drive to the pole position for Alejandro Sánchez and his early breakaway from Anders Dahl from Burst Esport, who was the only driver within a second of MSI in qualifying.

Sánchez’s dominant opening double stint was followed by similar ones for Salva Talens and Marc Perez. By mid-race, their lead was already two laps, and by the end, they were a full three laps ahead of their closest opponent on track.

The team with nothing to gain still drove like the title was on the line, and it turned out to be a history-making performance as MSI eSports became the first team in NEO Endurance history to win every race during a season.

With MSI uncatchable for the rest of the field, the fight was for second place, and it featured a race-long rotation of teams seeking to be the “best of the rest” in the 991 class.

Dahl made a strong start for Burst, pulling more than 10 seconds ahead of Guillem Escuder in the Williams JIM Esports Cup #991 car by the end of his first stint.

Teammate Kazuki Oomishima took over in the #911 Porsche to start the second hour of the race, but his season debut was short-lived. A seemingly innocent trip into the runoff after missing turn 2 saw their car hit a sausage kerb and nearly frontflip at 80 km/hr. The resulting damage was enough to end their race early.

While Burst was retiring, second place changed hands as the first round of pit stops wrapped up. Inertia SimRacing opted for a two-tire change and Eero Tuominen overtook the #991 and new driver Jorge Blasco Valls, who replaced all four tires during the hottest part of the afternoon.

Later in that stint, Tuominen even enjoyed a few laps in the lead as Inertia stretched their fuel tank longer than MSI. Once they pitted to put the car in Dani Korpi’s hands, Inertia remained in second while a new contender emerged in third place.

After a pole-winning run in the 6H MONZA, DV1 TRITON Racing struggled to thirteenth on the grid at Barcelona, and it took a two-hour trudge through the field for Piotr Jagodzinski to get the #999 car, which entered the race third in points, up into podium contention.

A spin for new driver Dawid Nowakowski cost him the position and elevated HM Engineering into the top three, but Nowakowski’s recovery drive had him back to third by the end of the stint.

TRITON solidified its grip on third when HM Engineering was hit with a 20-second stop-and-hold penalty, which dropped them outside the top five.

From there, TRITON set its sights on Inertia, and a no-tire change with four hours to go moved Kamil Franczak up to second. That sort of aggressive tire strategy was effective for TRITON, and it helped them hold onto second while Inertia rounded out the podium.

TRITON wasn’t the only 991 team to gamble on pit strategy during the race. As we’ve seen for much of the past two seasons, one of the first teams to test the waters was IRDK Endurance, opting to pit Egil Sandfeld midway through the first stint to get out of traffic and off-sequence compared to the rest of the field.

While that meant traversing the TCR field an extra time, Sandfeld found himself in sixth after the first cycle of stops was complete — a good improvement on his  twelfth-place qualifying effort.

Early pit stops also saw a mix of tire strategies in the Porsche, which punished its left-sides around Barcelona. That didn’t stop TRITON from double-stinting all four tires in their first stop, aiding their march through the field.

Once the sun set and the track cooled off, more teams took the risk of double stinting with mixed results. F4H Racing used that strategy at the three-hour mark to move Ian Gagnon-Renaud up to fifth, but a spin midway through his second stint dropped him to seventh.

However, F4H reclaimed those positions throughout the night, partially due to an increased pace and penalty-free run for William Laster and Daniel Ferguson, and partially due to their opponents having problems.

The first to fall out was HM Engineering after a pair of incidents with the Team RSO Audi R8. A bump entering turn 9 on lap 195 was repaid with a heavy collision on the frontstretch on lap 251, sending both cars to the garage.

Shortly after HM Engineering crashed, Williams’ #991 team fell out of the top five while serving their second penalty of the race, and they couldn’t make up that lost time, finishing a half-lap behind F4H in fifth place.

Due to their pit strategy, IRDK spent most of the race away from any close battles in the Porsche field, and their mostly clean drive left them in sixth place — their best result of the season.

On the other hand, two teams in the thick of the early-race war were GOTeam and TNT Racing. Joakim Vennström drove GOTeam’s #907 car to a season-best third place result in qualifying, but a spin on lap 4 at the hands of TNT saw that strong run evaporate and both teams fighting from the back.

They were both almost inseparable throughout the race, but the edge went to TNT. Several speedy stints from Benjamin Lindsay and Paul Darling helped them get ahead, and when GOTeam pitted for a splash of fuel with 12 laps to go, it solidified seventh for TNT while GOTeam ended in eighth.

SRN’s fight against Huber also ebbed and flowed all evening, including a mid-race battle between Daniel Graulty and Lars Baumeler, making his debut in Huber’s #988 car.

Pit strategy proved key in that fight, as Huber took four tires in Baumeler’s final stop while SRN’s Ryan Huff took fuel only in a short run to the finish. That put SRN in ninth with Huber in tenth.

There was one new team on the grid in the Porsche class, but it was a familiar name within the series. Torque Freak Racing had an invited entry in the #982 car, but they fought an uphill battle all weekend, qualifying fourteenth out of fifteen teams and finishing in eleventh, seven laps behind Huber and fourteen laps behind the pace-setters from MSI.

HM Engineering had perhaps the most violent ending to their race after their tête-à-tête with Team RSO. They finished twelfth in the race, but because of their distance completed, they earned 10 points to take third in the final standings, slotting in behind MSI and TRITON.

The Williams JIM Esports Cup M team in the #908 car had been fighting on the edge of the top ten all day until their car snapped loose in turn 3 just past the halfway mark, sending their Porsche nose-first into the tire barrier and out of the race.

Burst’s early exit and fourteenth-place finish dropped them to fifth in points — a tough final result for the team that looked like the second-fastest on pace alone for much of the season.

Chartwell Racing finished fifteenth and last among the 991 class after a challenging first stint. From last on the grid, they climbed as high as ninth, but were penalized for contact with a TCR and failed to serve the penalty in the time allowed, resulting in a disqualification.

A few teams were long gone from the track by sunset. For others, the battle was just beginning once the sun went down. But they were all watching the class champions drive off into the distance once again.

Yes, MSI made quick work of the longest race of the season, and with their Porsche perfection, they made sure that no one will ever forget the outcome of the middle class in this 24H SERIES ESPORTS season.