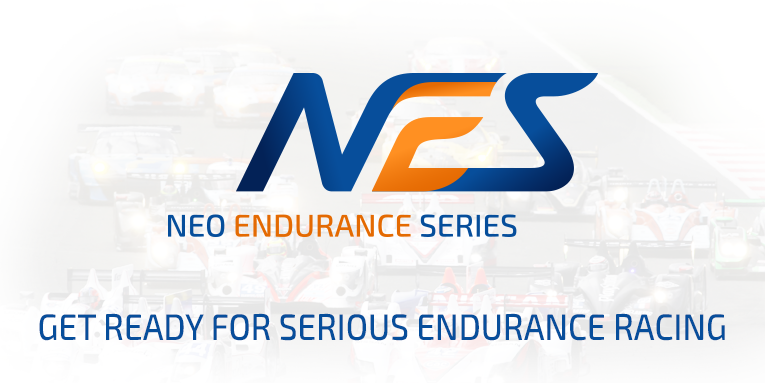 NEO Endurance is proud to announce a new series. A series where the organizers and endurance fanatics all have been waiting for, the NEO Endurance Series (NES). Season 1 of the NES will start this November.

On Monday August 4th NEO announced their new and long awaited NEO Endurance Series. Ever since the start of NEO, early 2013, the goal was to organize long endurance races with driver swaps. Everything NEO has done until now, was with NES in mind.
Right after the NEO GT Series has ended, the preparations for the NES began. A couple of weeks ago Steve Myers released a new blog with an ETA on the long waited feature: season 4, this year. Driver swaps will be expected around the end of October.

“Teams, drivers and fans expect a high quality league from us and that’s why we start a couple of weeks after driver swaps are expected to be released,” said co-president Niel Hekkens,”Before we start with NES, we want test the new feature extensively ourselves so we know everything about it.” There are plans for extra test sessions, but one or more test races are not ruled out. “With NES we have the opportunity to take NEO to the next level and this is our goal. Thanks to the partnership with EPS we have the extra man power to do this.”

In all three classes a minimum of 2000 iRating is required in order to participate. In the GTC class there is a PRO/AM structure, known from the NEO GT Series. Every car in GTC needs to have at least one AM driver. An AM driver needs to have iRating between 2000 and 3100. Also should never exceeded the 3200 iRating mark.
New for this season is that NEO may move drivers from AM to PRO category when they feel a driver is too fast to be qualified as an AM driver. Multiple factors will be taken into account. One of them are previous results in NEO events.

The HPD ARX-01c will get 95 kg of ballast. The total weight of the car will be 920 kg for the NES. “The HPD was very fast. We believe a bit too fast. That’s why there is 95 kg added to the car. The overall balance of the car hasn’t changed,” Hekkens explained. “The HPD cannot dive bomb very late anymore with the heavier car. HPD drivers really need to time their passes now. We are very excited about this.”
For the P & GT class there are no extra requirements for the drivers.

Schedule
The first season of the NES will be five races. Unfortunately day and night transitions will not be available yet when driver swaps arrive. That is why NEO has decided to keep the races 6 hours long, for now. It would be strange to run 12 or 24 hours in just day light or night. 6 hours is also a good race length for a first NES season.

The format of the race weekends has changed. Until now, qualifying was right before the race. For NES, qualifying will be moved to Saturday. Qualifying sessions are longer and all classes will qualify at the same time. The sessions will be long enough to look for that one clean lap. On Friday there will be two free practice sessions, one European and one US time slot. With these changes, there is a proper race weekend. More details of the sessions will be released in the coming weeks.

The following schedule is a preliminary schedule. It may change if needed. The dates are set. If there are any changes, the tracks might change.

Sebring International Raceway is the place to start the season. The race will be held during day light.

COTA is the new bad boy in the class. This track has already proven itself in the real and sim world to be a challenge with its variating track sectors.

An endurance series is not complete when Spa-Francorchamps is not on the schedule. The GP lay-out wil be used for the NES as there is a maximum of 42 teams.

Monza is expected to be released with the season 4 build. The combination of drafting and traffic will provide some interesting racing. If Monza is not ready by the time, the race will be held at Interlagos.

Road-Atlanta is the obvious place to finish a, hopefully, great season. Everything will be decided here.

For people who have iOS devices or devices that support iCal, a calendar has been created where people can subscribe to. With this calendar, the latest version of the NES calendar is alway within reach.
iCalshare
Direct iCal link

Broadcast partner
All events will be streamed live by Racespot. Racespot will provide the high quality images and commentary for all races. NEO is very proud Racespot is again the broadcasting partner.

At the moment this is it for now. More detailed information will be revealed in the coming weeks, so stay up to date by liking our Facebook page or follow us on Twitter. Don’t forget the website of course.

For now, please mark the dates in your calender if you wish to race in NES this autumn and get your team ready for serious endurance racing!