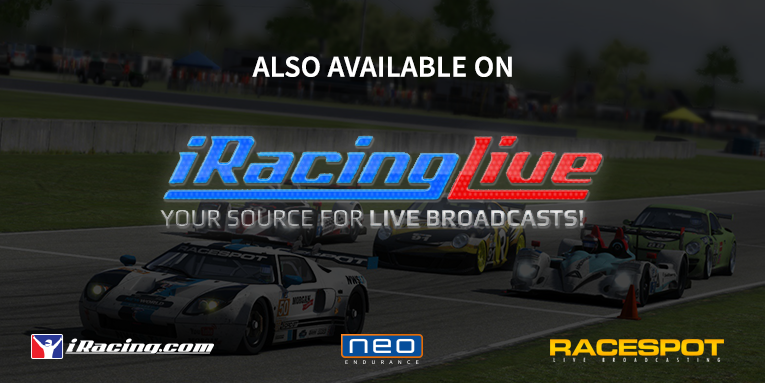 NEO Endurance is very proud to announce the NEO Endurance Series also will be available on iRacing Live, starting with the first race of season at Sebring International Raceway on October 18th.

iRacing Live is the official streaming platform of iRacing.com. Until now only both official world championships, NASCAR Peak Antifreeze Series and iRacing.com World Championship Grand Prix Series, and special iRacing.com events were broadcasted on iRacing Live. With the introduction of YouTube Gaming, iRacing.com wanted show more races on their channel. Thanks to the great effort by Hugo Luis and Wil Vincent from RacespotTV, the NEO Endurance Series will be broadcasted on iRacing.com’s official streaming platform, which will help giving the series more exposure.

“We are honored to be one of the leagues that are chosen to be broadcasted on iRacing Live. A lot of hard work is put into NEO and it feels good to get recognition from the staff of iRacing.com,” said NEO co-founder Niel Hekkens, “Every year we try to step it up again and improve ourselves. Being broadcasted on iRacing Live is a huge improvement for us. We are really excited. Together with the Gathering of Tweakers Endurance Series we have a great complete ‘TV package’, like in real life.”

RacespotTV is also working on streaming on multiple platforms at simultaneously. People from some countries, for example Germany, cannot watch live streams on YouTube and are therefore limited to Twitch. The only way to watch a live stream on YouTube is by using proxy servers. Obviously this is not ideal.

The new method of streaming by RacespotTV will help to increase the numbers of viewers throughout the race and make watching the racing more accessible.

RacespotTV is one of the word’s premier sim racing broadcasters. They broadcast the iRacing.com World Championship Grand Prix Series as well as a lot of other official main events by iRacing.com. RacespotTV provides a very high level broadcast, with the best Audio / Visual experience possible. For more information about RacespotTV, go to racespot.tv.