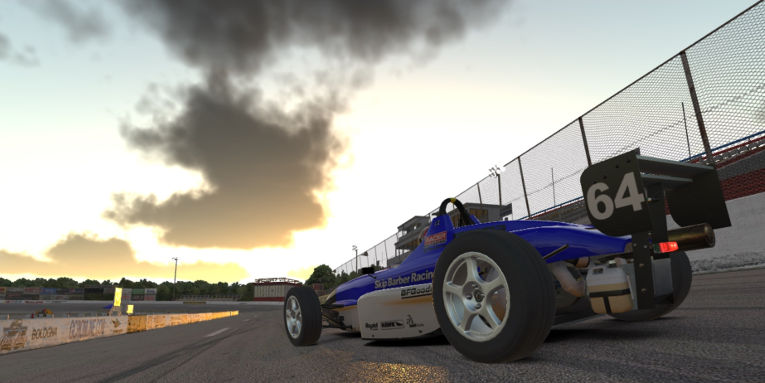 One of the last major elements keeping iRacing from being a complete endurance racing simulation is closer than ever, and thanks to some screenshots and a Q&A on the forums from staff members including Shawn Nash, David Tucker, and Randy Cassidy, we now have new information about how day-night transitions will work — and look — within the iRacing service.

Among the highlights are the first images of dynamically generated clouds and cars on track at various times of day, with the sun’s position in the skybox finally evident.

Nash said they’ve already made framerate improvements so the impact of changing sky conditions shouldn’t be too much of a GPU hit, although they may dial back or allow toggling off some features for the initial release, which will likely come in the December build.

“The clouds are completely generated with random noise functions, and unless ‘seeded’ with the same seed, they are never the same,” said Nash, adding that there are 4 billion possible seeds, meaning the chances of seeing the same skies from one race to another are slim.

“And they change with time as well.”

Eventually, they should be able to create more detailed cloud maps that change at different parts of a track, which would mimic the notoriously finicky weather at larger circuits such as the Nordschleife, Le Mans, and Spa-Francorchamps.

Nash said they plan to add night lighting to a few, but not all, tracks that are missing it. For nighttime racing at tracks without lighting available, the service will display a message before launching the session but will still let you drive it.

“We should get the warning in, but we won’t stop you from shooting yourself in the foot,” said staff member Jason Bryfogle.

When creating sessions, users will be able to specify the date and time, which may eventually be linked with real-world weather records.

For now, the service will continue to use the existing weather system, which is based on pre-set bounds for each circuit. Longer events will oscillate between a randomly chosen high and low temperature within those bounds, with the temperature and relative humidity changing like you’d expect as the sun rises and sets.

The track temperature calculations will be adjusted to account for the effect of cloud shadows, but staffers confirmed that they may still need to adjust them over time to make them more accurate.

And for anyone too impatient to wait for the slow-moving sun to see the time of day change, Nash said the option to speed up the sun by as much as eight times the normal speed will be available. The day-night transition feature is currently entering alpha testing.

Together with the all-but-confirmed initial release of day-night transitions, two new circuits have been confirmed for the December build, which is set to be one of the most anticipated ever for road racers.

The Tsukuba Circuit, a 2.045-km club racing venue in Shimotsuma, Japan, is finally set to be released more than eight years after it was first announced.

In addition, the recently laser scanned (and rescanned) Charlotte Motor Speedway ROVAL, which made its debut on the NASCAR calendar in September, will become available, with an updated version of the 1.5-mile Charlotte oval coming in the following months.

iRacing staff member Greg Hill confirmed that both circuits will be part of the base content package and free to all members.

Krönke Makes it Three in a Row

NEO’s newest partner series, the Oceanic Endurance Championship, recently wrapped up its second season, and we now know the two class champions who will receive invitations to next March’s RaceSpot 24 Hours of Le Mans.

In the P1 class, the All Star Motorsports #17 car won three out of the six races to edge both Fusion SimRacing entries for the title. Joe Berkett, Scott Cislowski, Thomas McMillan, Brady Meyers, and Dayne Warren all spent time behind the wheel of the All Star Audi R18 e-tron quattro this season.

All Star’s GT entry could not successfully defend its title in the GTE Pro ranks, finishing in third. Winning that class was the Trick Simsports Black team, which won twice and never finished worse than third all season. Their lineup featured Fawzan El-Nabi, Ross Rizzo, Martin Szilvassy, and Anthony Winkelman.

DGFX Season Opener in the Books

The remaining three invitations to NEO’s season-ending Le Mans race will come from the DGFX Racing League, which ran its first event of the season last month.

Winning overall in the 4 Hours of Silverstone was the Scuderia REC Porsche 919 Hybrid of Vladimir Marchevsky and Vlad Zayonchkovsky. The P2 class win belonged to the Bad Cactus Racing HPD ARX-01c of Kyle Birnie and Ed Voras.

In the GT Pro class, it was Graphite Racing’s Ferrari 488 GTE driven by Julian Bell and Casper de Kort taking the victory and an early edge in the standings.

DGFX is next in action this weekend for the 6 Hours of Daytona, which will be run under the lights of the Daytona International Speedway.

One of the few endurance events on iRacing that pre-dates NEO is set to make a return next month. The Targa Virginia, a three-and-a-half-hour test of patience, concentration, and speed around the Virginia International Raceway’s challenging Grand West layout, has been resurrected after a two-year layoff.

First organized by Jacob Desmarais in 2011, the race ran for five consecutive seasons with lineups of cars ranging from the original Mazda MX-5 Cup to the old Ford GT to the Riley Daytona Prototype. Former class winners in the event include current Thrustmaster Mivano Racing teammates Anders Dahl and Stefan Muijselaar.

With Desmarais’ blessing, former NEO competitor Dexter Castro has organized the sixth running of the Targa Virginia for Saturday, December 15, featuring the Porsche 911 GT3 Cup car, the Ford Mustang FR500s, and a unique three-car class with the fuel- and weight-balanced Skip Barber Formula 2000, Global Mazda MX-5 Cup car, and the Spec Racer Ford. Registrations are expected to open this week.

True to its origins in a time when driver swaps weren’t yet available on iRacing, this year’s race will continue to be for individual drivers only. That’s one explanation for the event’s tagline: “It’s not supposed to be sane. It’s supposed to be survival.”

Any NEO drivers attempting this year’s race may need to be a bit more insane than usual, as it falls on the same weekend as the 6 Hours of Interlagos. That could add up to five, six, or even seven total hours behind the wheel for anyone who dares to drive in both events.