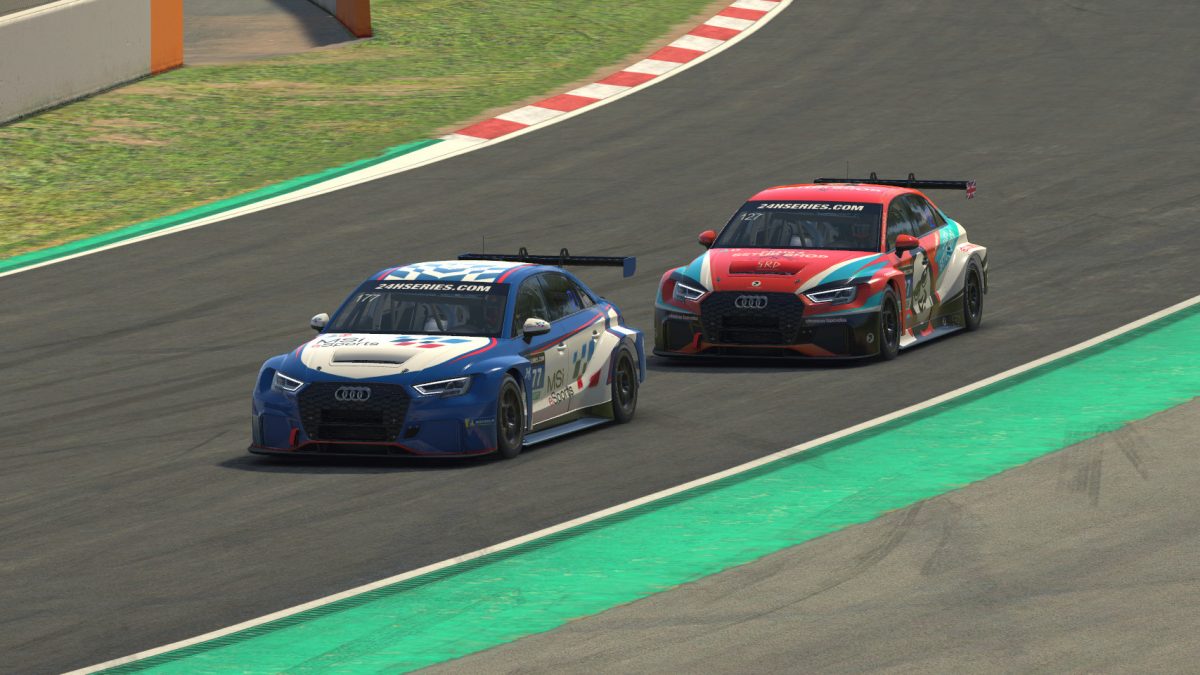 This season offered plenty of unknowns in the debut of the 24H SERIES ESPORTS, but chief among them was the new Audi RS 3 LMS TCR.

With just days after its release to get used to the car before pre-qualifying last September, teams were openly unsure of how the touring car would fare in an endurance championship.

Would drafting be the great equalizer in qualifying or races? Could the car make its tires last a full fuel stint? Or would faster-class cars wipe out the TCR fields before they made it that far?

After five races, the answers to those questions appeared to be: sort of, sort of, and fortunately not.

Yes, TCR draft packs became a common sight in qualifying and race sessions, but teams who managed their tires best inevitably separated themselves from the field.

No team did that better this season than CraigSetupShop, as drivers Jack Sedgwick and Simeon Lynch emerged as some of the fastest in a TCR, along with two of the best at managing tire wear and fuel mileage.

For five races, those abilities put them ahead, typically at the expense of CoRe SimRacing, whose own speed in the TCR was overshadowed only by their inability to beat CraigSetupShop.

But CoRe had one last chance to come out on top — and CraigSetupShop had one more hurdle standing in the way of a perfect season — in last Saturday’s 12H BARCELONA.

In a season that has largely come down to those two teams, the final race provided one more unknown in the TCR class as a new player stole the show in Spain.

Championship Won, the Race is On

Before the green flag even waved, CraigSetupShop was able to breathe their first sigh of relief. Only ten full-season entries — plus one non-points-scoring invited team — made the trip to the virtual Circuit de Barcelona-Catalunya.

Needing only tenth-place points to lock up the title, CraigSetupShop simply needed to be classified at the finish to earn the championship, regardless of what CoRe or any other team did.

That meant the race was on, and for Sedgwick, that meant driving to the front of the TCR train. While he qualified in fourth, it look just eleven laps for Sedgwick to overtake the teams ahead, including the polesitters from MSI eSports, to move into the class lead.

In a race where TCRs could stretch their fuel nearly an hour and a half, CraigSetupShop adopted a distinctly different strategy, opting to pit after just over an hour. Although it dropped them into the pack, fresher tires were more than two seconds per lap quicker for Sedgwick, which made other teams take notice.

CoRe’s Thomas Gibson and SimRC’s Jürgen Frank pitted four laps after Sedgwick, and after the first cycle of stops was complete, that trio held the front three positions.

MSI’s David Pérez came in ten laps later, and it came at a cost. Formerly the race leader, Pérez fell to seventh after the stops, and even after Sedgwick had made his second pit stop, he still held the race lead.

It was shaping up to be another CraigSetupShop sort of race — a command of strategy and with speed to boot. But after three Sedgwick stints, the team introduced a twist: manager Craig Williams, replacing Lynch in the lineup, got behind the wheel for the first time this season.

Setting a reliable pace, Williams held the gap to second-place Oriol Bohé steady or even extended it. But the #127 team’s strategy also remained steady, which meant short-pitting each stint while MSI and others ran longer.

As the race progressed and the track cooled off, fresh tires weren’t as valuable, and MSI’s longer stints became a difference-maker. Reeling back what was more than a 30-second deficit to CraigSetupShop and CoRe mid-race, MSI built up a nearly one-minute lead late in the race.

With strategies largely equalized and everyone running longer stints by the finish, even Sedgwick’s usual speed on old tires wasn’t enough to overcome the gap to MSI.

Bohé brought the #177 car across the finish line to earn MSI’s first TCR victory and seventh overall — joining the six accumulated by their 991 stablemates — in a successful season finale for the Spanish eSports squad.

A Fight Through the Night

The rest of the top five positions were far from settled in the final hours. Nearly all afternoon, CraigSetupShop and CoRe traded positions due to their differing strategies, but this race and season would not have been complete without another on-track duel between them.

Inside the final four hours, Gibson caught and passed Williams on lap 293, but just four laps later, a tap from the Biela Racing Team EURONICS #46 GT3 car send Gibson spinning in turn 7, letting Williams back through into second place.

For Sedgwick and CraigSetupShop, the end result was one spot short of a perfect season, but the top prize in the TCR class still belonged to them after an indisputably dominant inaugural season in the touring car.

CoRe again couldn’t find a way to finish in front of their class rivals, but with five podiums out of six races including a third in Barcelona, they walked away second in the standings.

The race for fourth came down to the last half-hour of the race between SimRC’s Claudius Wied and ASTRO Gaming Altus Esports’ Tuomas Tähtelä. With eleven laps to go, Wied ran wide in turn 1, and after a side-by-side, at times door-banging battle for the next half-lap, Tähtelä emerged with the position.

For the Altus team including defending GTE champion Simone Maria Marcenò, this NEO season didn’t offer the same sort of success, but the Barcelona finale did give them hope for the future. Along with a fourth-place finish in the TCR class, their race featured an impressive debut by Aussie driver Jackson Souslin Harlow.

SimRC slipped from third to fourth in the final standings with their fifth-place result — and MSI’s win — at Barcelona.

The race for sixth came down to the final pit stop. Dominic Ollivierre and Alpinestars Geodesic Racing made a four-tire change while Simon Trendell and Team Chimera went for fuel only when both teams pitted on lap 318.

That swapped their positions, elevating Chimera to sixth in the race and fifth in the final standings. Geodesic, meanwhile, improved throughout the season, with three results inside the top seven in the final three rounds.

Team MAD entered this season with high expectations given their experience in touring car racing, but they struggled to find pace in the Audi. At Barcelona, the team used veteran Miguel Freitas, strategist Maciek Sakowicz and Christian Rose making his season debut en route to an eighth-place finish.

Apex Racing Team was one of the only other TCRs to adopt an equally aggressive pit strategy as CraigSetupShop used, but they couldn’t match the results of the class champions. Hindered by several hits from faster-class cars and their own penalty for exceeding track limits, Apex came home in ninth.

The lone invitational entry in the TCR class belonged to Autorama Motorsport AG, a competitor in the real-world 24H SERIES making an appearance in the eSports category.

Paced by Swiss driver Miklas Born, the Autorama team ran at the back for much of the race, and after the lap-175 retirement for early sparring partner Torque Freak Racing, Autorama was left to bring up the rear of the field, finishing tenth.

With only eleven entries and ten finishers, the TCR field — which was 16 cars strong to start the season — had already been thinned out even before this 12-hour endurance race.

Whether it was the challenge of a new and different car, troubles with traffic, or simply struggling to keep up with the top teams like CraigSetupShop and CoRe, the TCR class seemed to drive some away throughout the season.

But persistence paid off, and there was no better example than MSI. While they were a top-five contender all season, their rise to the top of the scoreboard happened literally overnight in the afternoon-into-darkness round at Barcelona.

Just one round ago, they made their first appearance on the podium at Monza. Less than two months, and 12 hours of racing later, they are winners.

And not just that. They are giant-slayers, beating one of the speediest and most strategic teams in NEO history at their own game, sticking with their gameplan and watching it pay off with a victory.