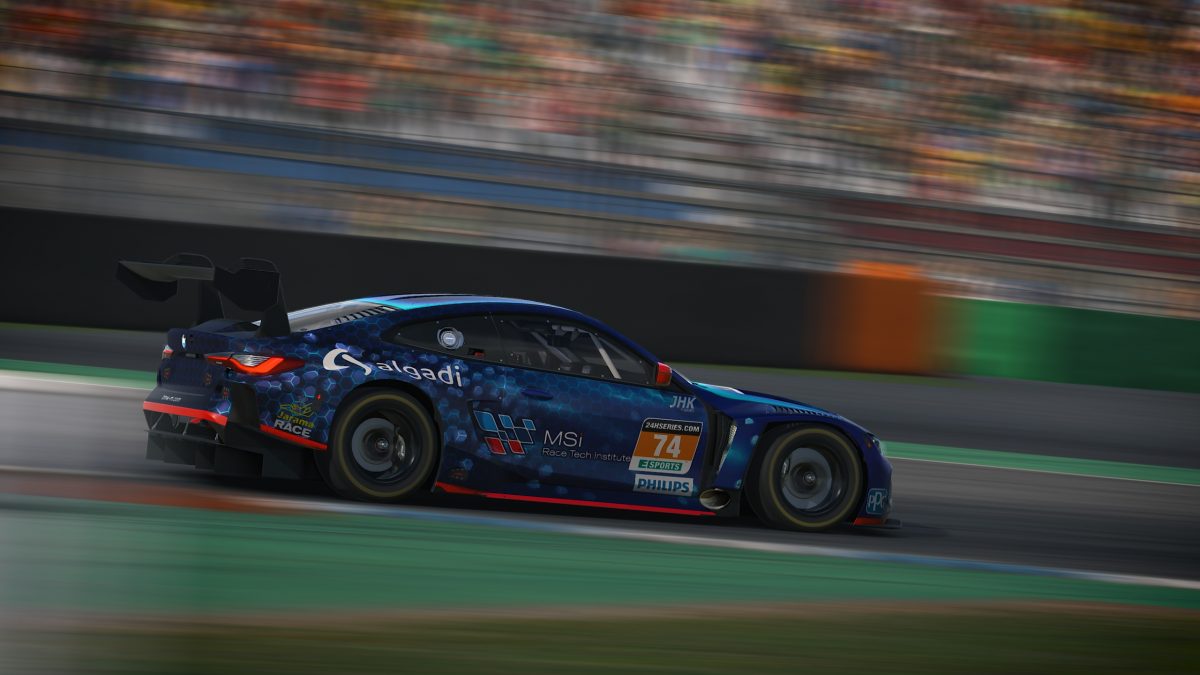 The 24H SERIES ESPORTS powered by VCO returned last Sunday with a top-class field for six thrilling hours of racing at the virtual Hockenheimring and four deserving class winners. After a long off-season and an arduous Pre-Qualifying system where entries were knocked out by mere tenths of a second, the season started off with 55 teams eager to get underway. After six hours or relentless pace, overall victory and victory in the GT3 class went to the Spanish MSi eSports team with drivers Alejandro Sánchez and Salva Talens.

After 219 laps, the Spanish duo finished more than 25 seconds ahead of the R8G Esports team in second place. Racim Fezoui secured second spot in the final few metres of the race in the series debut for the team headed by ex-Formula 1 driver Romain Grosjean, as the #45 Biela Racing Team EURONICS sputtered across the line to come home third after having to extend their final stint.

Pole sitter Jamie Moone SimRC lost the lead in the SimRC Porsche to MSi eSports on lap 3, but the team looked like a challenger for the win throughout the race despite receiving a penalty for contact with the Torque Freak Racing Teamspeak GT4 entry. The final 20 minutes of the race saw a hard fight between them and the second Biela Racing Team EURONICS entry for fourth place. Puresims Esports and first-time entrants Team Redline were the final two cars to finish the race on the lead lap.

In the 992 class, the Australian Logitech G Altus Esports team took victory in their return to the series. In the first two stints, the lead changed hands between pole sitters Inertia Imprimo.fi, Logitech G Altus Esports, Maniti Racing and Asetek Simsports Volante. But once Simone Maria Marcenó in the Altus entry got by Anders Dahl in the Volante entry midway through the second stint, they never looked back. Together with Jordan Caruso, Marcenó drove the Altus entry to victory by 50 seconds.

Behind them, a dynamic race developed between Volante, Maniti and CoRe Simracing who would finish in that order. Williams Esports meanwhile had a day to forget. After setting the fastest time in qualifying they had to start from the back of the 992 grid for a qualifying infringement and after just five laps contact with the recovering PRT Ronin SimSport GT3 put them out of the race. Title defenders Inertia will also be looking for a better race next time: after starting from pole, they came home in P9.

SimRC’s German duo of Jürgen Frank and Marvin Strehl took victory in the GT4 class. Polesitters ENTROPIQ and Team Fordzilla were able to challenge in the first stint, but both dropped back to leave SimRC out front. ENTROPIQ had a rough time in traffic and Team Fordzilla had collected a 60 second penalty for an administrative error. ENTROPIQ and Undercut Racing Team had a long battle for P2, but eventually the gap opened up and the top three finished with large gaps between them. Team Fordzilla was able to recover to fourth after serving their penalty.

In the TCR class, CoRe SimRacing delivered a masterclass. Normally, TCR racing is characterised by draft packs, and with the long straights of Hockenheim one would expect the same for this race. CoRe’s Corentin Guinez had other ideas: he used the early-race traffic to his advantage to create a gap between him and the pack behind and lead unchallenged until handing the white and orange Audi RS 3 LMS over to Kieran Harrison. Together they gapped nearest challenger Team Heusinkveld by nearly 50 seconds to claim a dominant victory. MSi eSports rounded out the top 3 to complete a 100% podium strike rate for the Spanish team.

Five more races in the 24H SERIES ESPORTS powered by VCO are scheduled to take place between October 2021 and April 2022. The next race will take the field to the bumps of Sebring on the same weekend as the first-ever 24H Sebring, for a total of 30 hours of racing.

Alejandro Sánchez (MSi eSports, GT3 winner): “We made no mistakes today and didn’t take any unnecessary risks. That was the key. In terms of strategy, we knew that we would have to save fuel for two laps during the race. Salva (Talens) chalked up one of those laps, and I got the other one. Congratulations to everyone else on the podium.”

Jordan Caruso (Logitech G Altus Esports, Porsche Cup winner): “That was brilliant. I was still asleep during the first half of the race. When I took over the car from Simone (Maria Marcenò), we were already more than 30 seconds ahead of our rivals. He did a great job. For me, it was all about staying in front. Hopefully, we can repeat that at the next race in Sebring.”

Jürgen Frank (SimRC, GT4 class winner): “The win feels extremely good. Starting off the new season like that is just perfect, especially in our home race at Hockenheim. But it was not easy at all. It is great to have just Caymans in the GT4 class. That means that no-one can complain about the BoP, as we all have the same car so it’s all about the setup and the drivers.”

Corentin Guinez (CoRe SimRacing, TCR class winner): “We had a very good race from start to finish. In fact, it went perfectly. We did particularly well in the traffic – and that was really intense. You had to remain patient and work clever. We managed that today.”

TFRLAB provides a Laptime Summary of each of the 24H SERIES ESPORTS powered by VCO races. If you want to have a closer look at the data from the 6H Hockenheim, check out their Summary here: TFRLAB | Laptime Summaries