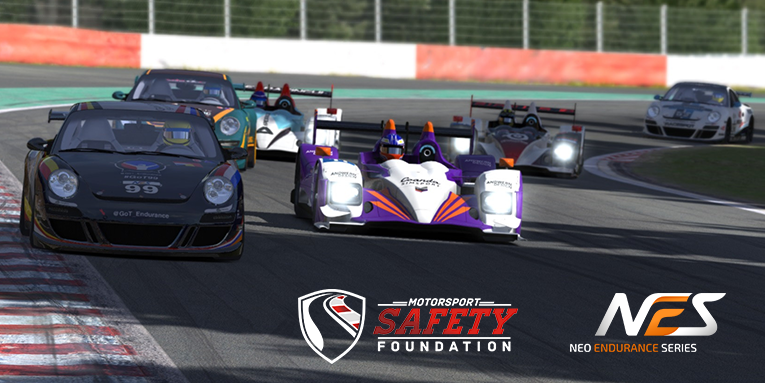 The first season of the NEO Endurance Series had a very special partner who is dedicated to improve the safety standards in real life racing. Today NEO Endurance is proud to announce it will extend its partnership with Motorsport Safety Foundation for another season.

In season 1 NEO donated the $160 to MSF. During the season teams were able to change their roster. For every driver change there was a fee of $5. The money of this fee went to MSF. At the end of the season there were 20 driver changes, resulting in $100 for MSF. Besides the money from the roster changes, NEO also donated $60 from its own pocket.

MSF was impressed by the support from a new direction and did not have to think twice to extend the partnership for another season. “We are very happy MSF would like to continue the partnership. It is very important to show the world sim racers are not just gamers, but race fans in the first place. Sim racing is being acknowledged more and is earning its own place in racing (in general) now. Look at the NASCAR Peak Antifreeze Series or SRO with its virtual Blancpain Endurance Series next year. Also TORA‘s new British GT Championship is acknowledged and supported by the real British GT Championship. In May I met race control of the biggest endurance series in the world: FIA World Endurance Championship. It really shows the real life series see the potential of sim racing,” said co-founder Niel Hekkens.

The Motorsport Safety Foundation is a nonprofit organization dedicated to improving safety standards in motorsport. It is a community where members can come together and have a voice, a place to share safety concerns and collaborate on research. MSF encourages active participation from all members who share our view that motorsport can and should be safer.

NEO Endurance, founded in 2012, is an online virtual racing league with focus on multiclass endurance events organized as professional as possible. NEO uses the iRacing.com Motorsports Simulation as its platform to organize series and events. For more information about NEO, visit neo-endurance.com.