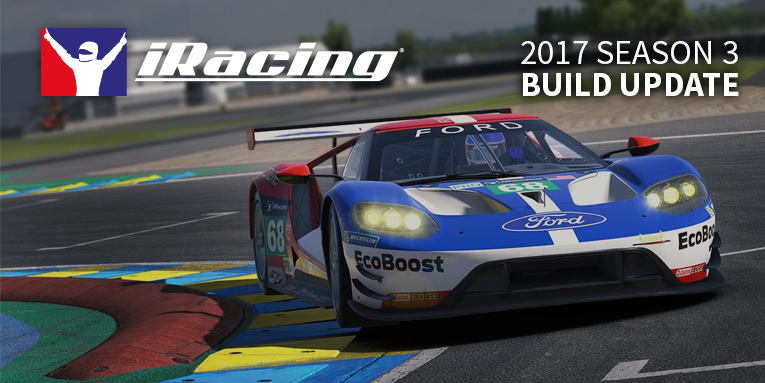 June is an exciting time for race fans. June is Le Mans and for iRacers it also means a new build! In March iRacing released dirt racing. It was quiet for a long time on what will be in this build.

A couple of weeks before this build iRacing announced a second GTE car besides the Ferrari 488 GTE. It is Ferrari’s rival: Ford GT!

The guys at Inside SimRacing had the opportunity to test both the Ferrari and Ford early.

On the oval side iRacing released a new short track: Myrtle Beach Speedway. A half-mile oval located in South Carolina. This track has been the training grounds for drivers like Jeff Gordon, all four generations of Pettys, and three generations of Earnhardts.

Besides new content, this builds gives us also a lot of updates. One of them is dynamic cube maps. This means the reflections of the environment will be dynamic. Until now there has been a static reflection of the environment projected on the cars. It sounds like a small detail, but we reckon this will do a lot for the immersion. Also this is another step towards day/night transitions.

The dynamic track surface also got an update, as well as the tires.
Read the full release notes below.

Dynamic Track
– Fixed a bug that allowed an exploit of joining an event during a lone qualifying session and not inheriting the track state from a prior session. This was especially noticeable in a dirt hosted session with a long practice session before qualifying.
– The rate of conduction and convection of heat from the track has been decreased, which will result in higher track temperatures and quicker buildup of heat due to the running of cars on track.

Tires
– The temperature effects from locking up a wheel have been improved. Now the temperature is kept separately for the contact patch and the entire tire surface, so lockup heats up the contact area much faster which reduces grip. Also, the temperature drops rapidly upon releasing the brake and allowing wheel rotation. This keeps the tire from becoming too “greasy” after a lockup. Both effects deal much more realistically with tire hot spots on the surface of the tire.

Rendering
– The Simulation can now render out cubemaps dynamically to improve reflections on cars. There is a new UI element in the Graphics and Replay sections of the Options menu labeled “Dynamic Cubemaps”. This controls how many cubemaps will be rendered per frame. By default this option is set to 0 since it can have a large impact on performance.

Shadows
– Support for shadow volumes has been removed from all 3D objects and the rendering engine in favor of shadow maps. This reduces the in-memory and on-disk size of 3D objects, especially cars.
– Portions of very large trackside objects near the racing line, such as portions of the terrain, can now receive static shadow maps as they did previously in the DX9 version of the Simulator.
– Night shadows have been adjusted.
– Three new night shadow map filters have been added (pcf4p, pcf8p, pcf16p in order of increasing performance cost/visuals). Enabled the filter through the dropdown for the UI.

Replay Render Modes
– A new system for viewing Replays has been added!

Weather
– Fixed a bug that could cause the weather as displayed in a replay loaded from disk to be different than the weather as it appeared while in the session.

Virtual Reality
– The “UIScreenDistance” and “UIScreenSize” settings have been removed from the “Rift” and “OpenVR” sections of the RendererDX11.ini file. These settings are now controlled by the screens themselves to support curved UI surfaces in browser mode and other future enhancements.

Dirt Sprint Car
– (ALL) – Opponent cars have been updated to get the right-front tire in contact with the track surface and reduce occurrence of corner entry glitching.
– (305) – Top wing fore/aft control is now adjustable for fixed setup series.

Ferrari 488 GTE
– NEW CAR!
– The Ferrari 488 GTE joins the iRacing.com roster of vehicles!
– With more than 100 wins – including victories in the 12 Hours of Sebring and the 24 Hours of Le Mans – to its credit, the Ferrari 458 GTE was the proverbial tough act to follow. But the Ferrari 488 GTE was more than equal to the task, securing the 2016 World Endurance Cup for GT Manufacturers in its debut season with victories at Silverstone, Spa and the Nürburgring, as well as the 19th running of Petit Le Mans.

Ford GT – 2017
– NEW CAR!
– The Ford GT 2017 joins the iRacing.com roster of vehicles!
– Although it was always intended to take its place among the world’s most desirable ultra-high performance sports cars, make no mistake that the third generation Ford GT was conceived, designed and built with one priority in mind: win the 24 Hours of Le Mans on the 50th anniversary of Ford’s fabled victory at le Sarthe in 1966. The result is a masterpiece in design, echoing the iconic shape of the Ford GT that Bruce McLaren and Chris Amon piloted to victory in the “ronde infernal” while taking every possible advantage of the Fédération Internationale de l’Automobile’s regulations to create another Le Mans winner.

HPD ARX-01c
– At Le Mans track configs, selection of the low Down Force aero package is now mandated and additional reductions in Down Force and drag are applied. A note to this effect has also been included in the Garage. As a result, the unmodified Low Downforce package is available again for suitable tracks outside of LeMans.

Indycar Dallara circa 2011
– Season setups have been updated.

Mazda MX-5 Cup circa 2015
– Season setups have been updated.

NASCAR XFINITY Chevrolet Camaro, Ford Mustang, and Toyota Camry
– This vehicle has been brought up to 2017 specs including:

– Season setups have been updated.

Circuit of the Americas
– Some 1x zones have been slightly relaxed, especially the red paint areas entering and exiting a curb.

Myrtle Beach Speedway
– NEW TRACK!
– The Myrtle Beach Speedway has been added to the digital landscape of iRacing.com!
– Since opening in 1958 as the Rambi Raceway dirt track through its transition to pavement in 1974 to today, Myrtle Beach Speedway has not only been the scene of great weekly action but a springboard for stock car racing royalty. Four generations of Pettys (Lee, Richard, Kyle and Adam), three generations of Earnhardts (Ralph, Dale, and Dale Jr. and Kelly) cut their teeth at the South Carolina track where the list of winners includes the likes of Buck Baker, Dick Hutcherson, David Pearson and Ned Jarrett who earned his first victory in what is now known as the Monster Energy NASCAR Cup here in 1959.