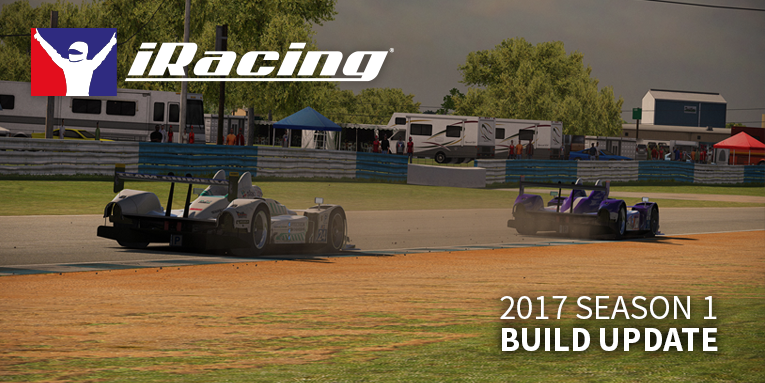 It’s december again and this means two things: Christmas is coming and iRacing will deploy their 2017 season 1 build. This build has multiple enhancements and improvements to the software and overall service.

As expected, there is no new content.  Just updates and improvements. The developers have introduced World State Triple Buffering, which should eliminate some framerate choppiness. The telemetry output has received a lot of updates as well. Replays will now have the ability to record voice chat as well. Always convenient when settling an argument. Talking about voice, there are some enhancement to the (live) spotter functionality as well.

On the visual side of the simulator, iRacing now added heat haze effects. This is always good as it adds to the immersion and it should look great on the broadcasts as well. With the new animated support characters on the pit box, another step to fully animated pit crews has been made. The introduction of visor tear-offs and new hand-over-hand steering animations (some cars) should bring more immersion to the racing experience, especially when using an Oculus Rift or HTC Vive.

Dirt racing update and time-attack
This year, iRacing worked hard on dirt racing. Unfortunately they cannot release dirt racing together with this build because some details still need to fine tuned. The release of dirt racing is now set to the season 2 build, in March, or even maybe sooner when it’s done before that time.

Another feature iRacing is working on, is time-attack mode. This mode doesn’t need any explanation. iRacing will release a video soon with more details on time-attack feature. Time-attack will not be released this build, but at some time soon.

Read the full release notes below.

Website
– Added some more pre-race information for drivers in the Drivers’ Meeting pre-race page.
– The Sporting Code URL has been updated.
– Fixed an error on the What’s Hot page that mistakenly showed Time Trial Sessions.
– Fixed navigation of the Quick Start Guide to allow smooth navigation transitions when viewing it after the initial required time.

Simulation
– Several settings for an upcoming feature named “Browser Mode” have been added to the “app.ini” file. These additional settings will be fully described when Browser Mode is released, and have no effect at this time.

Race Control
– Fixed a bug where cutting a course to take the checkered flag would not properly award the black flag penalty due to scoring being finalized on the car before the cut course penalty was processed.

Dynamic Track
– The marbles texture has been updated to provide more accurate information on marble density.
– Fixed an issue that could allow the server to create track dust when processing client updates.

World State Triple Buffering
– This upgrade fundamentally alters some aspects of how the Sim’s “realtime”/”BG” thread (the one that keeps the world moving) and the Sim’s “drawing”/”FG” thread (the one that paints the frames) interact with each other. Virtually every UI widget, including the “3D world” widget, uses data from the realtime world to determine what should be drawn. How this data is safely copied for the FG to draw a frame so that it doesn’t get confused should the realtime world “wake up” and start advancing the world is now different.

– Previously, the FG would lock-out the BG, make its copy, enable the BG, and then draw its frame. The main problem with this method is that if the BG is in the middle of updating the world when the FG is ready to start a new frame, that “lock-out” must wait until the BG finishes updating the world. Only then can the FG make its copy. But that means the FG gets stalled, preventing it from drawing frames until that world update finishes. The lower-end your machine, or the more complex the world update (mostly the more cars in the session), the longer it takes the BG to finish its world update, and the more likely the FG will get stalled, and the lengthier the stall is likely to be, leading to choppiness in the frame rate.

– With the new method, the “copied” state information the FG uses to draw is instead generated by the BG itself when it finishes updating the world. And to keep the BG from overwriting the state the FG is currently using to draw a frame, that copied state information is triple-buffered (in fact, some things use triple-, some use quad-, and some use quintuple-buffering, depending on their needs). The mechanism that the FG and BG use to not step on each other’s toes is now “lockless” – meaning that neither thread “locks-out” the other thread in the normal course of business.

DirectX 11
– Improved Alt+Enter so that it now attempts to transition back to the original full-screen monitor and original full-screen mode instead of transitioning to a screen mode on the monitor where the window is located when Alt+Enter is used.
– Fixed several bugs with Low Res. particles for multi-views.
– Fixed an issue where high detail mirrors at night tracks could cause the car reflections in the mirror to render without car paint and with missing polygons.

Weather
– A heat haze effect has been added to the environment. This effect aims to create the appearance of “heat shimmer”, a visible distortion in the air. This effect is tied into the ambient and track temperatures. This effect can be toggled on or off in Graphics options.

Driver
– Visor tear-offs have been added to all drivers of vehicles that do not have a windshield.

– A first-pass of the hand-over-hand steering animation has been added to some vehicles. The list of vehicles includes:

Pit
– Pit team support members that are behind the wall are now animated for the player’s car (or focus car). These characters can be seen providing support and managing the team from behind the pit wall.

– Many cars have stacks of tires which appear near their pit stall, placed among their other pit apparatus. These stacks were generalized and shared amongst all cars. Now, each car should have an accurate stack of tires which is appropriate to that car.

Pace Car
– The pace car has transformed from a Ford Mustang FR500S into a Ruf RT 12R.
– The official iRacing skin has returned to the pace car.

Replay
– All voice chat that you send or receive is now saved to the replay. To review it, activate the new “Replay Chat Review” control in the replay controls area on the Session screen. While active, you may continue to use the transmitter on your radio to talk, but the scanner part of your radio becomes disconnected from the radio’s speaker. Instead, the radio’s speaker is connected to the replay, and the voice chat that you hear, along with the notification of who is speaking and on what channel, comes from the replay. However, the scanner is still active, and any received messages continue to be saved to the replay.

Video Capture
– The video capture API has been updated to work around an NVidia driver issue.
– This should fix the issue where videos are coming out black using the most recent NVidia drivers.

Telemetry
– New telemetry variables, “PlayerTrackSurfaceMaterial” and “CarIdxTrackSurfaceMaterial” are now available that indicate what type of surface is under the car (concrete, sand, grass, etc.). Surface materials are defined in new “irsdk_TrkSurf enum.” This is measured relative to the center of the car, just as with the “PlayerTrackSurface enum” that indicates how the surface is scored (race, pit, offtrack, etc.).

– A new telemetry variable, “PushToPass” has been added which reports the state of the Push to Pass button.

– A new telemetry variable, “dcMGUKDeployModeToggle” has been added that indicates if the in-car MGU-K deploy mode is set to fixed(0) or adaptive(1).

– A new McLaren ATLAS importer version 1.05 is available for download from the member site. This adds some new unit conversion parameters and adds support for properly viewing 360 Hz telemetry.

EasyAntiCheat
– This build uses an updated version of EasyAntiCheat that should reduce the likelihood of encountering EAC alerts that are caused by internet infrastructure issues.

Peripherals
– Support has been added for controlling backlights of all Razer devices, Logitech mice, and single color keyboards. Code has been added to indicate the current flag.

Aston Martin DBR9 GT1
– Weight has been increased by 70 kg to bring it closer to the minimum weight under which we understand it competed circa 2008.
– Minor adjustments have been made to the aero to bring overall performance back in line with the Chevrolet Corvette C6.R GT1.
– Downforce sensitivities of the rear wing have been modified to ensure the car does not reward minimum rear wing settings at all circuits.
– Fuel economy has been slightly increased.
– The external engine sound transitions between close and distant sounds for this vehicle have been improved.
– Fixed a bug that caused headlight flashing of opponent cars to be invisible.
– Season setups have been updated.

BMW Z4 GT3
– Slightly increased aero drag for GT3 BoP.
– Fuel consumption has been slightly reduced for GT3 BoP.
– Realigned the external mirrors with the appropriate bezel.
– Fixed an issue where a driver could not see all of the digits on the blue backlit display.

Chevrolet Corvette C6.R GT1
– Downforce sensitivities of the rear wing has been modified to ensure the car does not reward minimum rear wing settings at all circuits.
– Inner headlights are now enabled during the daytime.
– Season setups have been updated.

Chevrolet Corvette C7 Daytona Prototype
– The external engine sound transitions between close and distant sounds for this vehicle have been improved.
– The driver’s seatbelt has been fixed so it no longer protrudes out the bottom of the vehicle.

Dallara DW12
– Increased tire wear for oval tracks to increase degradation and prevent running tires for multiple stints. Also, Indy tires are now used at Motegi to improve quality of racing.
– A pitboard has been added for this vehicle. The custom paint template has been updated to reflect this.
– Season setups have been updated.

Ford Falcon FG V8 & Holden Commodore VF V8
– Construction and compound changes have been made to the vehicle tires. These changes should produce more realistic grip levels, improve drive-ability around the limit, increase degradation, and improve out lap grip in cold ambient conditions.

– Power steering has been increased to help balance this vehicle with similar cars in the Sim.

HPD ARX-01c
– This vehicle now uses PBR shaders.
– The color of the wheel rims for this vehicle can now be changed.
– Fixed an issue with the pivot of the right-front wheel.

McLaren MP4-30
– We’ve implemented an alternative MGU-K deployment strategy. The internal combustion engine reaches full output at less than full throttle, and the MGU-K supplements smoothly between full engine output and full throttle at the pedal. The goal is to have smoother power delivery, and the hope is that the cost to efficiency of deployment is minimal. The throttle pedal position at which the engine reaches full output and the MGU-K begins to deploy is configurable by the user, and varies from 67.5% to 90% in 2.5% increments. Note that the old deployment smoothing strategy has been disabled.

NASCAR Nationwide Chevrolet Impala circa 2011
– Season setups have been updated.

Pontiac Solstice
– Fixed an issue where the fuel gauge needle would rotate incorrectly on opponents’ cars.

V8 Supercar Ford Falcon circa 2012
– Construction and compound changes have been made to the vehicle tires. These changes should produce more realistic grip levels, improve drive-ability around the limit, increase degradation, and improve out lap grip in cold ambient conditions.

– Power steering has been increased to help balance this vehicle with similar cars in the Sim.