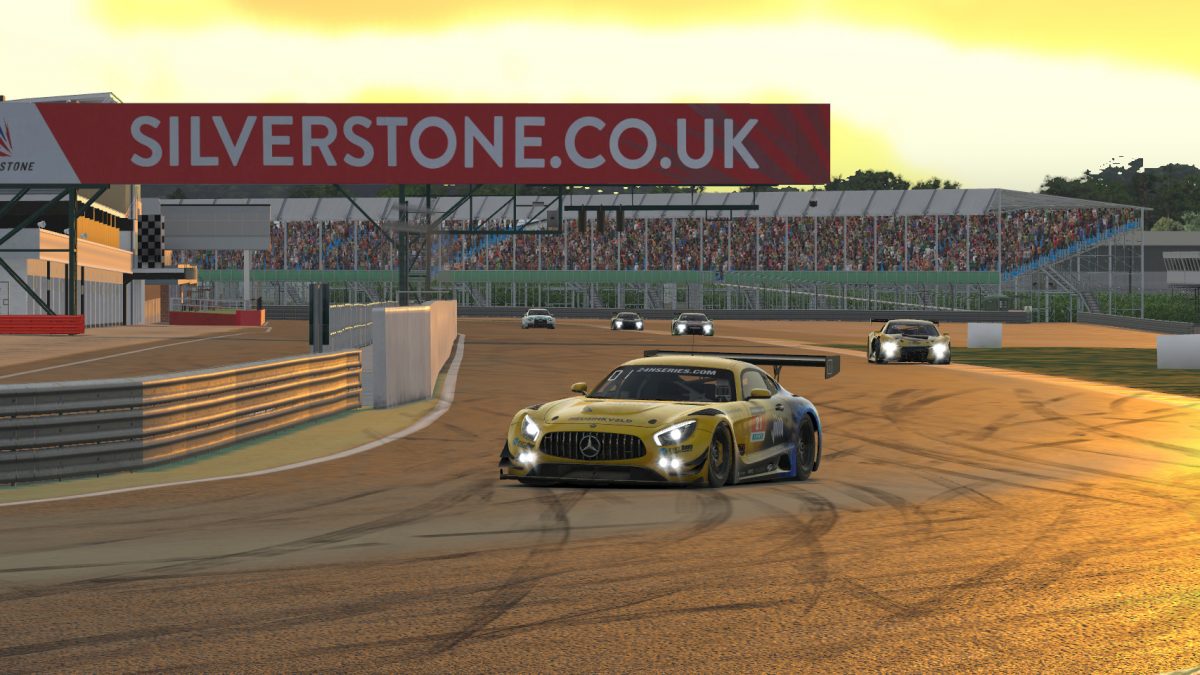 The opening two rounds of this season saw two teams dominate the GT3 class of this 24H SERIES ESPORTS championship.

Biela Racing Team EURONICS and Williams Esports combined for one pole and race win apiece, and aside from MSI eSports‘ brief time in the lead early in the season-opener at Spa, few teams have been able to keep up with the top two, and no others have finished within a minute of the race winner in either round so far.

With such a talent-packed lineup in the class and with no changes to the GT3 car or tires in the most recent iRacing build, it seemed like only a matter of time before other teams caught up and took a challenge to the top two.

Last Sunday’s 6H SILVERSTONE brought just that sort of shift, although it didn’t come without a few fireworks along the way.

Those began at the race start, which was reminiscent of the season-opener at Spa. A few eager drivers in the midfield accelerated out of Club corner before the leaders, causing a multi-car crash across the starting line.

Ricardo Silva from S2V Racing was ultimately penalized for the contact that took out the Audis from DV1 TRITON Racing and Virtual Motorsport. Another penalty was handed to SRC Squadra Corse, whose Marco Gabriele Nese also jumped the start and spun into the gravel after a four-wide move gone wrong.

At the front, Lukas Jestädt, who earned the pole for Biela’s #45 team with a quick lap in the dying seconds of qualifying, made a clean start while second place changed hands behind him entering turn 1.

The benefactor was last season’s GT class phenom, Simone Maria Marcenò, who showed strength all throughout the weekend. While early crashes at Spa and COTA ended those races for Logitech G Altus Esports, Silverstone started with their best qualifying spot of the season — a third-place performance by Marcenò — and an early attack to get by Kay Kaschube from the COTA-winning Williams car.

From there, Marcenò chased down Jestädt, and when the GT3 leaders hit TCR traffic, the battle between them erupted.

On lap 6, they caught the Alpinestars Geodesic Racing TCR entering the arena section, and a bold move around the outside by Marcenò put him side-by-side with Jestädt exiting turn 3.

The two then sandwiched the Geodesic car in turn 4, and while Marcenò snuck past on the inside, contact between Biela’s GT3 and Geodesic’s TCR caused Jestädt to spin.

Officials ruled it a racing incident, but regardless of the cause, it didn’t make recovery any easier for Jestädt in the moment. With the rest of the GT3 field bearing down on them, Jestädt tried to spin his Audi off the track but was hit by MSI’s GT3 in the process.

The incident dropped the Biela #45 car back to thirteenth place, and it proved to be an unlucky spot as four laps later, they had another collision — a braking-zone bang-up with the Huber Racing E-Sports Mercedes in Vale corner that drew a penalty and dropped them off the lead lap.

One of the season’s two winners had a problem within the first ten laps, and the other would follow closely behind. Williams had settled into second, less than three seconds behind Altus, but with Filip Mitrevski from Ronin SimSport right on Kaschube’s bumper.

On lap 12, contact between them entering Stowe sent Williams spinning off-track but not into the wall. However, it dropped them back to sixth, leaving a top five of would-be first-time winners this season: Altus, Ronin, Williams JIM Esports, Sorg Rennsport eSports, and Mivano Simracing Team.

Among that group, the shuffling continued at the first round of pit stops. Penalties for Ronin and Mivano for earlier contact cost them positions while Williams JIM’s Pierre Lisant moved up to second and Kaschube climbed two spots into fourth.

The one constant was Altus, who kept Marcenò behind the wheel for a race-opening triple stint. The gaps behind him didn’t grow quickly, though. Lisant showed great pace on older tires and Williams’ Laurin Heinrich, who relieved Kaschube at the second pit stop, took over second place during his double stint and decreased the lead gap to less than 10 seconds as Aldo Massa took over for Altus.

Their charge was halted by the race winners’ curse striking again. Just past the midway point, the Williams Audi was forced to tow back to the pits, dropping them outside the top ten and forcing Kaschube to get back behind the wheel.

Without the increasing pressure from behind, Massa found his rhythm in the lead and the gap to his former team, Williams JIM, stabilized around 13 seconds. With third-place Ronin more than 30 seconds behind, it appeared the race for the win would come down to the top two teams.

In a podium position, Ronin also had a solid gap over its closest competitors. Andreas Jochimsen opened up a 30-second gap to Sorg and nearly a minute to Mivano with two hours to go. In addition, Ronin copied their COTA approach, running long stints to shorten their final pit stop.

They weren’t the only GT3 team to go for such a strategy this round. Sorg mirrored Ronin’s pit timing, and Team Heusinkveld may have gotten the best fuel mileage in class, generally running a lap longer in their Mercedes than anyone else.

Several other teams made a strong impression at Silverstone for their impressive race pace. After starting thirteenth, Team RSO made steady progress moving through the field. Cedrik Nebelsiek and Nils Lorenz each spent time running in the top five, but a penalty for contact with the Virtual Motorsport car with two hours to go proved costly, dropping them from fourth outside the top ten.

Despite a penalty of their own early in the race, Phoenix Racing Team also showed improved speed and comfort in traffic as the afternoon continued. Tim Matzke and Ruben Bonga had the #5 Audi in top-five contention in their best showing so far this season.

However, even they struggled to hold onto the lead lap thanks to the torrid pace set by Massa up front. Entering the final hour with Altus’ lead holding steady at 10 seconds, it became clear that the only way to beat them would either be through luck or a strategy move.

And for Williams JIM, whose Lisant and Moreno Sirica had been quick on old tires all afternoon, just such a gamble was in order. Their Mercedes had run some longer stints mid-race, so they made a later final pit stop than Altus with 21 laps to go and kept the same stint-old tires on the car.

That reversed their 10-second deficit into a 16-second lead, but Massa was closing quickly — at times up to a second per lap.

With a late-race battle appearing more and more likely, any delays could have cost either leader a shot at the win. That also meant making some risky moves through traffic, and with 16 laps to go, just after setting the fastest lap of the race, such a move backfired for Massa and Altus.

After catching the second-in-class CoRe SimRacing TCR in the esses, Massa looked to make a pass into Chapel corner, but with CoRe already tracking out toward the apex, Massa had to take to the grass. As he rejoined the racing surface, he banged doors with CoRe and lost control, ultimately colliding head-first with the wall on the Hangar Straight.

It was a dramatic turn of events for the early leader and fastest car on track, and in an instant, Altus went from racing toward a possible win to fighting for any points possible while driving with front-end damage more than three seconds off the pace.

Their crash was a undoubtedly a sigh of relief for Williams JIM, and they drove incident-free for the final 15 laps to claim the team’s first NEO Endurance and 24H SERIES ESPORTS victory.

Although they may not have been one of the favorites entering the race, especially after losing a key cog in Massa after COTA, Lisant and Sirica stepped up when it counted and made a calculated pit move that forced their opponents to play catch-up and ended up being the key to the win.

The fight for second appeared to be settled on the final lap, as Mitrevski caught Massa on the backstretch to move Ronin past Altus. However, time adjustments after the race based on incorrectly applied penalty times, along with a pair of post-race penalties to Altus for their late-race incidents, meant Ronin had a solid hold on second all along, eventually scored 42 seconds behind the winner.

Mivano was also elevated to third place after the scoring was sorted, earning last season’s P1 champions their first podium this season. Altus ended up in fourth, also their best result of the season but certainly a disappointing end to their race.

More penalty drama affected the fifth-place battle. Phoenix was given back 25 seconds for extra time they were held during their early penalty, and combined with an additional 5-second time penalty for Sorg, Phoenix moved up to fifth in the final results.

Sorg fell to sixth while Team Heusinkveld held onto seventh, besting their COTA result by one position after their fuel-only final pit stop helped them jump up a spot. Williams finished eighth following their eventful race, but they still took sole possession of the class points lead thanks to Biela’s struggles.

The final top-ten positions went to the two teams penalized for the lap-1 incidents: S2V eSports in ninth and SRC Squadra Corse in tenth.

Team RSO’s own penalty, plus an additional one applied after the race for a late collision with a TCR, saw their promising run end in eleventh. Likewise, Biela’s #45 team couldn’t rebound from their first-stint frustrations, and they finished in twelfth, just ahead of their teammates in the #46 Audi R8.

Damaged in the starting-line crash, Virtual Motorsport finished eight laps down in fourteenth, and LEO Racing Team had its own crash — a solo spin into the turn-2 wall — just after the first pit stop that left them in fifteenth.

Huber Racing, MSI, and TRITON all failed to make it through the contact-packed first hour and did not finish.

Those early incidents shook up the order in the GT3 class. The question now is whether it will last.

Can Biela and Williams bounce back from their bad luck?

Can Altus continue to claw back raw pace and harness it over an entire race?

And can the likes of Williams JIM, Ronin, and even Mivano convert their season-best results into the confidence needed to compete for wins and podiums in the second half of the season?

Appropriately enough at the circuit closest to London, the 6H SILVERSTONE brought a changing of the guard at the front of the GT3 field. The upcoming races will prove whether the old guard will reassume their posts or if these new recruits are here to stay.