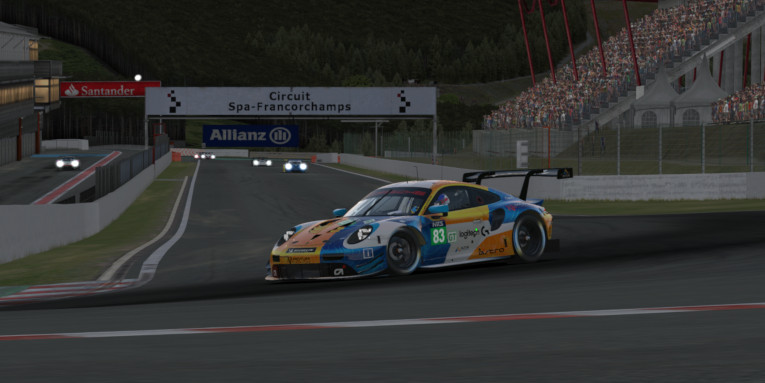 Three of the hottest teams in iRacing entered last weekend’s NEO Endurance Series race at Spa hoping to add another highlight to their impressive beginning to 2019, and they would all do battle in the GT class.

Both Williams JIM Esports and MSI eSports have been among the leaders in GT world championship series qualifying, and after four rounds of the season, Williams sits first and third in the standings with MSI in fourth.

Meanwhile, Logitech G Altus Esports ended January on a hot streak, sweeping both top-split GT class wins in the Daytona 24 along with a dominant victory in the 6 Hours of Suzuka.

In the Spa showdown between GT powerhouses, Altus struck first. Simone Maria Marcenò’s qualifying lap of 2:11.532 was quick enough for the pole position, edging Salva Talens of Euphoria Drivex Racing, MSI’s Marc Perez, and Williams’ Aldo Massa in the #96 Ferrari by less than half a tenth.

In the opening laps of the race, Perez and Talens traded the second position several times while Marcenò began to open a gap at the front. Talens then settled into a third-place battle with Massa while they slowly distanced themselves from the fifth-place fight between S2V Racing and Odox Motorsport.

While it was a largely clean start in the GT class, it wasn’t completely without incident. On lap 2, SimatoK eSports and Team Buschfink Racing came together in Pouhon, which sent the #78 Ferrari spinning and eventually speared in the left front by Team Eighty-Four.

When faster traffic arrived for the first time a few laps later, two top-ten teams — CoRe SimRacing and Team Eighty-Five — were caught up in a crash with the Torrent Motorsports P1 car exiting the Bus Stop.

It immediately ended the race for Team Eighty-Five’s Lukas Jestädt, and after a second crash later in the first hour for CoRe’s Kimmo Suominen, his Ford team — the championship leaders entering this calendar year — failed to finish their second consecutive race in 2019.

The rest of the field raced on, and the first cycle of pit stops shuffled the running order as some teams opted to double-stint their tires and others put on fresh rubber. Altus was one team that made a tire change, which dropped them from the lead back to fourth while MSI took over up front.

By the end of that stint, Marcenò was up to second place and just six seconds behind Perez. Behind them, Talens held the third position while SimRC.de’s Jürgen Frank got around Massa for fourth place.

While most teams changed tires during their second pit stops, Altus went off-strategy, leaving Marcenò out on old tires to finish his race-opening triple stint.

With the race nearing the halfway point, one contender saw its day end early. A pair of incidents at Pouhon for the Williams #96 car — one on entry when they were door-slammed by a P2 prototype, and one on exit when Moreno Sirica hopped the same kerb that claimed CoRe’s car — ultimately left their Ferrari too damaged to repair.

As one Williams team dropped out, their teammates in the #97 car were moving forward. Despite starting at the back after failing to set a qualifying time, the duo of Guillem Escuder and Mario Bertolotti marched toward the front and were inside the top five by the three-hour mark.

Varying pit strategies with some teams on old tires and others on new ones kept positions in flux, and that included the race lead. Despite making an extra tire change when Yannick Lapchin climbed in the #83 Porsche, Altus managed to chase down MSI’s Alejandro Sánchez and make the pass entering Les Combes on lap 100.

From then on, Lapchin would never be caught, and he crossed the finish line 15 seconds ahead of MSI to earn the third win of the season and second in a row for Altus.

However, the fight for third place was far from settled once the sun set at Spa. The erstwhile podium contenders from Euphoria spun out of Blanchimont during Daniel Lafuente’s final lap in the car, forcing them to tow back to the pits and make Talens begin a recovery drive from thirteenth place.

TRITON Racing then inherited the third position, but the ongoing surge by Escuder in the Williams #97 car turned that into a tight battle late in the race. The two took the white flag side by side, and a door-to-door race down the Kemmel Straight ended in contact that left TRITON’s Piotr Jagodzinski off in the grass.

Stewards reviewed the incident after the race but ruled it the product of close racing. That secured the final podium spot for Williams, who salvaged a decent result for the team despite the problems for their #96 team earlier in the event.

For TRITON, the problems were only beginning. An off-track on the last lap was their fortieth of the race, which warranted a post-race 25-second penalty — the equivalent of a drive-through — that dropped them entirely outside the top five.

In their place, Thrustmaster Mivano Racing moved from seventh to fourth during Anders Dahl’s final stint in the car, earning the #69 team’s third fourth-place result of the season and putting them fourth in points after the race.

S2V continued its up-and-down season, recovering from a Suzuka slump to finish fifth at Spa. They were followed by Redface Racing, whose pairing of Joel Guez and Laurent Miskiewicz in the #66 Ferrari finished an appropriate sixth and also sits sixth in the standings.

With seven laps to go, Redface passed the #77 Porsche of SimRC, putting that team seventh at the finish. Breaking that string of numerical coincidences, Torrent Motorsports’ #98 team finished eighth with recent addition Vincenzo Amico joining Kevin Siggy and Filip Mitrevski behind the wheel.

TRITON’s post-race penalty dropped them to ninth place and down to third in points. Entering next month’s season finale at Le Mans, MSI holds a five-point lead over Altus and a 13-point lead on TRITON. With double points on offer in that 24-hour race, the title will be truly up for grabs at the Circuit de la Sarthe.

Euphoria recovered to tenth at the finish after getting past SRN Motorsports in the final hour. Torque Freak Racing lost time with a mid-race spin at Pouhon and finished in twelfth.

Two laps behind the class winner was Team-Eighty Four in thirteenth, Buschfink in fourteenth, and SimatoK in fifteenth and the final point-earning position.

The teams behind them all failed to finish. Odox crashed entering Blanchimont while avoiding an incident between the P2 leaders. The Williams #96 team was seventeenth, and ZENNITH eSport and Porsche Basel by Sorg Rennsport eSports also each retired just over an hour into the race. CoRe and Team Eighty-Five were twentieth and twenty-first after their early crashes.

In the race that started as a showdown between teams on top of their games, Altus came out ahead despite — or perhaps because of — their alternate strategy. However, MSI continues to hold the advantage in the standings.

For either team, a win at Le Mans will secure the championship. That ensures at least one more opportunity to see NEO’s — and iRacing’s — top GT talent perform under pressure this season.