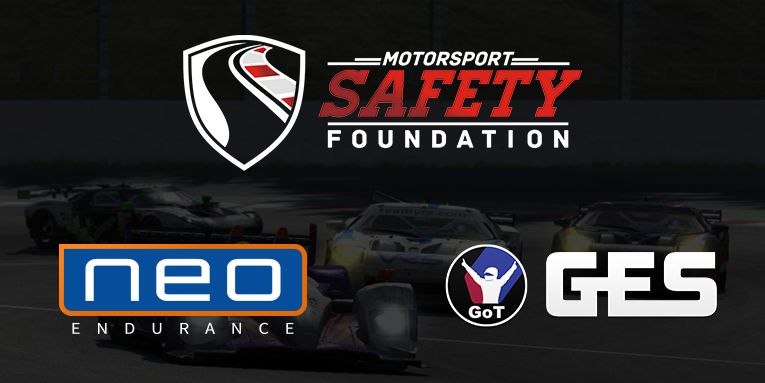 MSF has been supportive from the start and the partnership between the two is getting stronger every moment. MSF has been impressed by the support from a unique direction. The support from the sim racing community will grow in the coming months. NES has its own support series: Gathering of Tweakers Endurance Series (GES). Both NEO and Gathering of Tweakers iRacing will raise money for MSF together next season.

Both series will have various ways to raise money. NEO will participate in MSF’s program called “% for Safety”. $6 of the entry fee of each team will go to MSF. GoT will also donate an amount of money. In addition, both series will donate the money raised by roster changes. There is a fee of $5 per driver for changing the roster during the season. The full amount of this fee will go MSF at the end of the season.

Besides these initiatives by the series, both NEO and GoT encourages everybody to support MSF by donating. Any amount is welcome! Go to motorsport-safety.com/donate and help to improve the sport all sim racers love.

About NEO Endurance
NEO Endurance, founded in 2012, is an online virtual racing league with focus on multiclass endurance events organized as professional as possible. NEO uses the iRacing.com Motorsports Simulation as its platform to organize series and events. For more information about NEO, visit neo-endurance.com.

About Gathering of Tweakers Racing
Gathering of Tweakers iRacing is a big community from the BeNeLux with mainly members from Belgium and The Netherlands. Their motto is ‘serious racing with a smile’. GoT organizes weekly a Monday Tournament race, every 13 weeks a Season Final and Monday Madness,  the GoT Endurance Series and iRacing Schools. The community has drivers of various levels. For more informations about the community, visit got-racing.eu.