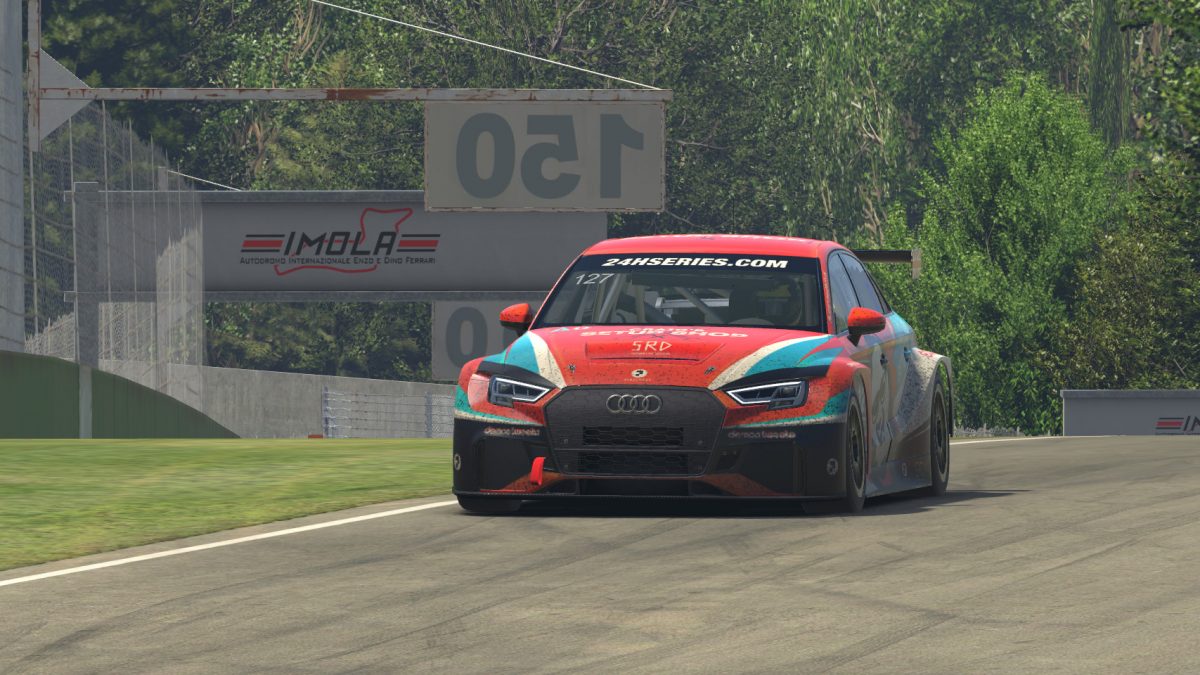 Just when it seemed like the TCR class in the 24H SERIES ESPORTS championship was becoming too one-sided, qualifying for last Sunday’s 6H IMOLA brought the most closely matched field so far this season.

Just 0.7 seconds separated 13 of the 14 qualifiers, with the top nine covered by less than half a second.

But in a nod to the past — and a sign of things to come in the race — one driver eked out a tenth of a second over the field to take the pole, and it was none other than Jack Sedgwick from CraigSetupShop.

For the team that has yet to lose, race day at Imola got off to the best possible start, while their closest pursuant this season — CoRe SimRacing — found themselves fifth on the grid in an inauspicious beginning to their own day.

Of course, the races themselves — not qualifying — are ultimately where points and positions are won and lost, and early at Imola, CoRe was the team on a tear toward the front.

By the middle of the first stint, Thomas Gibson had climbed to second by leapfrogging the cars ahead in the TCR train, and on lap 21, he grabbed the lead when Sedgwick made an uncharacteristic mistake, sliding wide through Acque Minerale with the GT3 leaders breathing down his neck.

SimRC’s Jürgen Frank also got by, putting Sedgwick in an unfamiliar position — third place in the three-car lead group that Gibson was threatening to break away from.

But the ace up CraigSetupShop’s sleeves all season has been their long-run pace, and again in this race, it was a factor, helping them close the gap to CoRe’s back bumper by the end of the opening stint.

Behind them, it was an up-or-down start to the race for many TCR teams. Apex Racing Team started in third, but a solo slide through Acque Minerale on lap 3 dropped Jamie Fluke back to tenth. Eventually, he settled into a fight with Prologue React E-Sport, who returned to the grid for the first time since Spa.

Williams Esports was one team on the rise, with Arthur Lehouck climbing from ninth to fifth in the first six laps. They got past the likes of Team Chimera, who dropped four spots in the early laps and to make matters worse, were penalized for contact in traffic a half-hour into the race.

Toward the end of the first stint, Lehouck made it up to third — the best run this season for the Williams TCR team — and MSI eSports’ Oriol Bohé had a solid top-five start to the race, but neither could stay in touch with the three leaders.

Meanwhile, that lead battle heated up just before the pit stops, and some hectic moments in traffic brought the top three back together again and nearly running three-wide late in the stint.

Pace alone was clearly not enough to separate the leaders, but pit road would be. A five-second slower stop for CraigSetupShop dropped them out of the draft and back to third again, and even speedy Sedgwick had trouble closing the gap during his next stint.

That fight would fall to the teammates of the top three, and as the race entered its middle third, SimRC’s Felix Luding was the driver to beat, getting past CoRe’s Ross Balfour while Simeon Lynch closed the gap for CraigSetupShop.

With Balfour unable to keep pace, it became a two-team race for the lead between SimRC and CraigSetupShop, and they swapped the position five times in the rest of the race.

The final lead change came on lap 142, when Sedgwick got past SimRC’s Claudius Wied entering Tamburello. It didn’t take much time after that for the gap to open up, thanks to Wied running through the gravel at Rivazza on the next lap and sieged by heavy traffic in the laps that followed.

Entering the final hour, Sedgwick’s lead was up to 10 seconds, and with a later and shorter final pit stop than SimRC as insurance, CraigSetupShop completed yet another masterfully run race, turning tenths in qualifying to many seconds in the race thanks to their strategy and pace from start to finish.

Wied held second for SimRC, giving that team its best finish of the season. Behind them, the final podium position came down to a late-race fight between two teams whose races had taken very different trajectories.

After their early off-track, Fluke and Alex Simpson drove Apex back into the top five by mid-race and into podium contention in the final two hours. They were closely pursued by Astro Gaming Altus Esports, who also had a slide at Acque Minerale with help from a GT3 car but used a strong late-race drive by Tuomas Tähtelä to get onto Apex’s back bumper.

While Tähtelä got alongside Fluke through Tosa on the final lap, Apex came out ahead to take the position — their first podium — by a carlength, while Altus finished fourth.

The battle for fifth also came down to small margins and close racing in the closing laps. While falloff on old tires had been an Achilles’ heel all season, Williams made their rubber last in their final-stint fight against MSI.

Although Bohé got past Williams’ Moritz Löhner with four laps to go, the MSI car hopped the kerbs in turn 10 on the next lap and let Löhner sneak through to secure a top-five result and move Williams up to a tie for seventh in the standings.

The rest of the top ten positions weren’t as closely contested coming to the checkered flag, but they did represent solid results for several teams and a disappointment for another.

Alpinestars Geodesic Racing started twelfth and survived their own first-hour door-banging with Prologue in their rise up the rankings. Strong opening and closing stints by Dominic Ollivierre and Blake Neck’s speed in the middle helped move them up to seventh — their best result this season.

Although Team MAD couldn’t equal their top-five run from Silverstone, they overcame a fall outside the top ten in the first hour, rebounding to finish eighth. Among their early foes was Team Chimera, whose race was cluttered by contact in traffic and ended in ninth.

After falling from the lead battle, CoRe took tenth place as they watched their race unravel in the final two hours. With Gibson set to get back in the car, a pit stop snafu instead forced race strategist Marius Golombeck to jump behind the wheel, then pit two laps later so Balfour could take over again.

Late in Balfour’s final stint, he spun into the wall off the bumper of the GT3-leading Williams Esports teams, leading to a controversial no-call after CoRe’s admission of a misunderstanding that led to the contact.

The only silver lining for CoRe was Gibson’s pass over Satellite Racing Team with five laps to go that put them into the top ten and helped them hold second in points, although they are just three markers ahead of SimRC with two races to go.

For Satellite, only one of its two cars — the #111 driven by Alessandro Dalledonne and Ferris Stanley — made it to the finish after its #112 entry stopped on track with less than 90 minutes remaining.

The final TCR running at the finish was Torque Freak Racing, who couldn’t find the pace around Imola all weekend and had to settle for twelfth.

Satellite’s #112 team was classified in thirteenth while Prologue’s return to the grid ended early, leaving them in fourteenth.

What started as a closely matched field at Imola quickly became another runaway by the top teams in class. In this case, both CoRe and SimRC at times showed the speed needed to win, but both also fell victim to the terrors of traffic or the bad luck of driver swaps gone wrong.

For Sedgwick and Lynch, neither has been an issue yet — at least not a race-altering one — and as a result, CraigSetupShop remains perfect — a tough task in the class that has at times taken a beating this season.