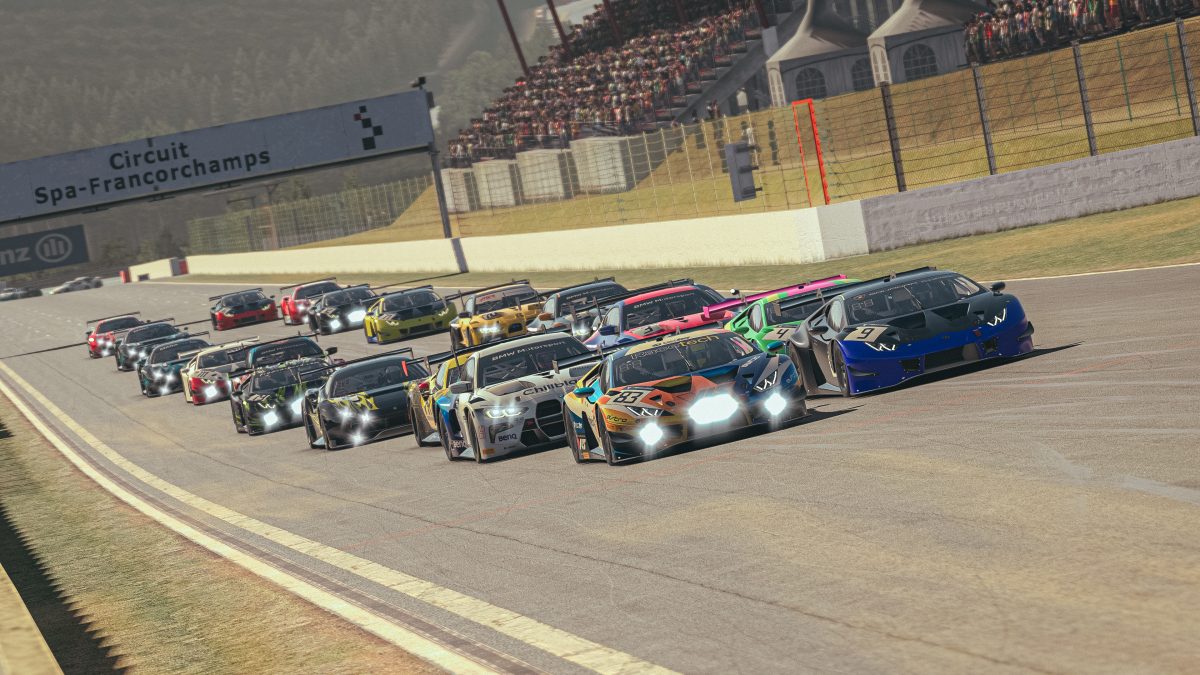 Over the course of the past year three new GT3 models have been added to the iRacing service, all of which will be making their debuts in the coming season of the 24H SERIES ESPORTS, as lined out in the new regulations. The Lamborghini Huracán GT3 EVO and the Porsche 911 GT3 R have both already seen their fair share of success in 24H SERIES history while the BMW M4 GT3 is yet to make its global competition debut. Let’s have a closer look at the three GT3 monsters which will the teams will have to tame in the coming season, before they join combat with the Mercedes AMG GT3.

The BMW M4 GT3 was added to iRacing back in January of this year, when it was still very much under development and therefore labeled as a Prototype version of the car. With the most recent iRacing build, the Prototype moniker was dropped and the latest Bavarian GT3 is now ready to race. The car was meant to make its global competition debut at the Nürburgring in the NLS, but a crash in practice prevented that from happening. While the real life debut was postponed, in iRacing the car has been competitive since its first outings, scooping up the big wins throughout the year. So far a BMW M4 GT3 has won the 24 Hours of Daytona and the 12 Hours of Sebring powered by VCO, and it was a full BMW podium with a 1-2-3 at the 24 Hours of Nürburgring as well as the 24 Hours of Spa.

As with its predecessor, the big M6 GT3, the M4 GT3 is powered by a twin-turbocharged engine. In contrast to the M6 GT3 and the Z4 GT3 before that however, the M4 GT3 only has six cylinders, aligned in a single line for a total of 3 litres. This makes the new G80 M4 the first top-level M3/M4 racing car since the E36 M3 to have only six cylinders. The engine in the new car is capable of producing up to 590 hp, depending on BoP measures. Perhaps the most interesting part for sim racers will be the steering wheel, which was developed together with Fanatec and will be identical to the wheels you will be able to buy and fit to your own wheelbase at home. For those who are looking for absolute immersion, it would seem that there is no better pick than the M4 GT3.

The Lamborghini Huracán GT3 EVO was added to iRacing together with the BMW in January. Developed by Lamborghini’s Squadra Corse in conjunction with Dallara, the Huracan GT3 has arguably been the most successful effort of the marques who entered GT3 racing over the past decade. Perhaps the car’s biggest triumph is the three consecutive victories at the Rolex 24 at Daytona in 2018, 2019 and 2020. Suffice it to say that the car is a good choice for those who want to go endurance racing. On iRacing the car’s most recent major endurance victory came in the Creventic Endurance Series, where Vendaval Simracing stole the victory in the closing moments of the race.

The EVO version of the Huracán model – the version of the car on iRacing – was launched in 2018, and meant a major revision of the car: a new roll cage, new aerodynamics, a new engine and power steering system, and a new suspension design to make it easier to drive and to improve the tyre wear rate. The new engine is the 5.2 liter version of the well-known V10 from the VAG engine warehouse, found elsewhere in the Audi R8. By the end of its first year in competition the car had racked up victories in two major endurance races and three Blancpain titles. In other words, the updates were quite succesful and made the Huracán into a major player in the GT3 class. Teams looking for an all-rounder will need to look no further than the Italian supercar.

It was only a matter of time before the Porsche 911 GT3 R would be available for iRacers. The fifth Porsche and the third 911 to be added to iRacing, the 911 GT3 R is the latest in a recognisable line that traces all the way back to the first generation from 1964. More races have been won by a 911 and its derivatives than any other car model. 911s have won at places like Daytona, Sebring and Le Mans, the Monte Carlo rally and the Targa Florio, and even Paris-Dakar. The car has only been available on iRacing since the start of this season, but it has already collected a second place in the iRacing 6 Hours of the Glen and three wins in the VRS SCO Sprint Masters.

Just like all other 911s before it, the GT3 R is powered by a flat-six engine, mounted over the rear axle to complete the tradtional 911 package which has been perfected by the engineers in Stuttgart over the many years. In the GT3 R it has a 4.0l displacement and can produce up to 550 hp, depending on BoP. Out of the three new additions to the GT3 line-up, the 911 is the only one to be based on a track-focused car: the 911 GT3 RS. If one were to only take into account a car’s history and lineage, the 911 GT3 R sticks out with head and shoulders over the other two new cars. It remains to be seen if that is true in the 24H SERIES ESPORTS, but in the real-life 24H SERIES Porsche 911 GT3 Rs has won every single race so far.