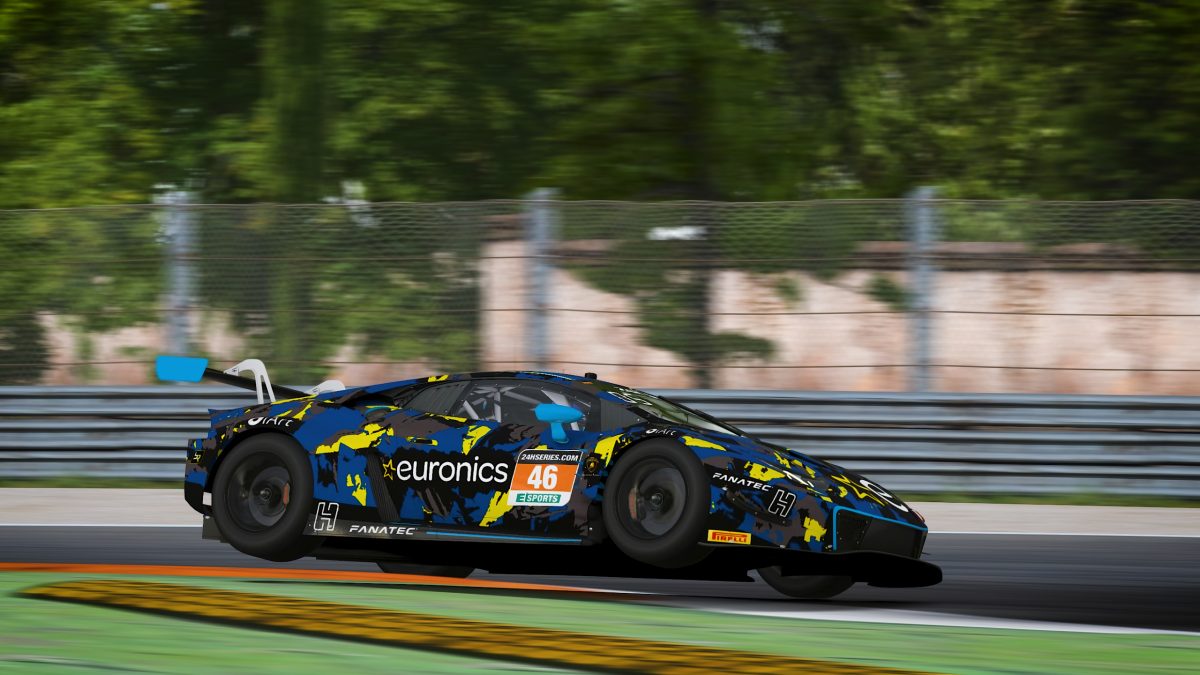 Luca Kita and Patrick Heinrich became the fourth different winners in as many races when they secured their first win of the season in the 24H SERIES ESPORTS powered by VCO for the Biela Racing Team EURONICS. At the wheel of the #46 Lamborghini Huracán GT3 EVO, the duo triumphed after six hours and 196 laps on the legendary Autodromo Nazionale di Monza. The Biela crew beat Jorn Zoetekouw and Jamie Moone in the Team75 Bernhard by SimRC #75 Porsche 911 GT3 R by just three seconds with Filip Mitrevski and Gabriel Erdelyi in the #78 BMW M4 GT3 from PRT Ronin SimSport a further two seconds back. This meant that after a full six hours of racing, three teams with three different cars were separated by just five seconds.

The different cars were not the only thing setting the podium finishers apart from each other. Each of the three challengers was on a different strategy plan, and it was not until the final ten minutes of the race that the eventual finishing positions were decided. Up until the halfway point of the race the Biela and SimRC teams followed the same strategy, but at the fourth pit stop different decisions were made. The Lamborghini took fuel only and committed to a third stint on its tyres, while the Porsche stopped 7 laps earlier to change to a new set of rubber. It was not until the second to last pit stop that the Lamborghini also changed tyres. This meant that towards the end of the race Zoetekouw could do no more than keep up with Kita, but never got close enough to place an attack.

While the Biela and SimRC strategies were at least somewhat similar, the PRT Ronin SimSport team went a different direction. Unlike the previous races, the GT3 cars were unable to complete an hour on a tank of fuel courtesy of the long straights at the Temple of Speed which meant that six stops were required for the first time this season. The Ronin team knew this from the start and used this to their advantage. The BMW was the first of the GT3s to make a scheduled pit stop, and continued to run shorter stint than the others all through the race. This allowed them to run with a lighter car and have quicker pit stops, a strategy that saw them in the lead for a majority of the race and seemed to lead them to victory as the race progressed. However, like Zoetekouw’s Porsche, Erdelyi’s BMW had received new tyres one stint prior to Kita’s Lamborghini. On top of this the tyres on the BMW were even older than those on the Porsche, as due to the Ronin team’s fuel strategy they had stopped 6 laps before the SimRC team. Adding to this the extra stint that Biela did prior to their tyre change, the tyre age difference between the BMW and the Lamborghini amounted to a total 37 laps.

This tyre age difference would end up the flaw in the Ronin plan. All throughout the final stint Kita relentlessly chased and caught up to Erdelyi, and with just 12 minutes to go the Lamborghini passed the BMW into the Variante del Rettifilo. Zoetekouw in the Porsche was not far behind, and 5 minutes later the Dutchman also made his way past the struggling Brit. Even though the Ronin strategy hadn’t succeeded in getting them to the chequered flag first, it had yielded the team their first podium since the MAHLE 6H Sebring 15 months ago.

Behind the top 3, the second Biela Racing Team Euronics came home in fourth and T3 Motorsport by Maniti in fifth to have three Lamborghinis in the top 5. Elsewhere, championship protagonists R8G Esports and MSI eSports had difficult days. The R8G team struggled in qualifying and only started in P8 but would fall further back on lap 1 after contact in the Lesmo curves. On top of this, Racim Fezoui collected a 15s penalty dropping them back to P18 and last in the GT3 class. From there, Fezoui and Vlad Khmichev managed to recover back up to P8, but their championship lead has taken a significant hit. Polesitters MSI eSports lead the first stint and looked competitive, but both Dani Elgarbay and Christian Lamela ended up collecting penalties which delayed the Spanish outfit by 30 seconds total. The blue BMW would end up coming home in P12, first car to be one lap down. A measly four points sees the MSI entry drop to fourth in the standings.

In the 992 class, during the first two stints it looked to become a five-way battle between Williams Esports, Logitech G Altus Esports, CoRe SimRacing, T3 Motorsport by Maniti and Asetek SimSports Volante. There was nothing to choose between these five cars, and they swapped positions throughout the first 90 minutes of the race. In the second round of pit stops different strategic choices were made, and the pack separated. The Williams and Altus cars would find each other several times later on, but as the race developed so did the lead of the Williams duo of Alessando Bico and Moreno Sirica. They came across the line with a six second advantage over Altus team mates Simone Maria Marcenò and Jordan Caruso. Following two DNFs in the first two races, the Williams team have now won two races in a row and are developing into a serious title contender, especially considering the final race will award double points.

Other members of the earlier leading pack Core SimRacing and T3 Motorsport by Maniti ran trouble free but could not keep the pace of the leading pair. They would finish P3 and P4 respectively. The fifth member of the leading pack, Asetek SimSports Volante, could not say the same. Technical issues in the pit stop for Boudewijn Kuster meant that the car left the pit lane without fuel, forcing the Dutchman to pull over at the Lesmo’s and tow back to pit lane. Having been close to the CoRe SimRacing car prior to the pit stop, the problem cost the Volante team a lap on the leaders and the chance of a third successive podium.

Team75 Bernhard by SimRC were back on form in the GT4 class following their bad luck at the Red Bull Ring with a third win of the season. Jürgen Frank, Marvin Strehl and Hayden Berns shared driving duties at the wheel of the Porsche 718 Cayman GT4 ClubSport MR, but had to contend with the Matthew Turnbull / Ian Gagnon-Renaud / Ashley Finch crewed Puresims Esports car for the first half of the race. Puresims actually took an early lead as traffic separated them from the chasing pack. But eventually the SimRC car caught back up and like in the GT3 and 992 races, here too pit strategy proved to be key: the SimRC team managed to separate their car from the Puresims car with a shorter pit stop half way through the race and from there they never looked back. Towards the end of the race polesitters UNDERCUT Racing Team looked to be putting in a challenge for second on Puresims, but that failed to manifest and the Belgian team came home third with fourth placed Carbon Simsport inside ten seconds of the podium.

In the TCR class, CoRe SimRacing also celebrated their third win of the season. Corentin Guinez and Kieran Harrison drove their Audi to another victory, but not without a significant challenge from the MSI eSports duo of Marc Perez and Victor Lobato. The Spanish team lead the first five hours of the race, but Guinez was able to put Lobato under pressure going into the final hour. While navigating the traffic of the Carbon Simsport GT4, Lobato clipped the apex kerb at the Ascari chicane which upset the TCR and allowed Guinez through. Lobato did well to save the car from further damage, but the lead was lost and never gained back. Team Heusinkveld rounded out the podium.

The fifth and penultimate race of the 2021/22 season of the 24H SERIES ESPORTS powered by VCO will be the 6H of Barcelona on 13th March. The titles will be decided on 17th April 2022 in the 12-hour race at Spa-Francorchamps.

Moreno Sirica (Williams Esports, 992 class winner): “I think we managed the strategy perfectly for the conditions and for the length of the race. Basically, we only did one full tyre change. We managed to run the right side for four stints somehow. At the end of the fourth stint the rear was really unbalanced but somehow we made it work. I think that was the key because honestly, I wasn’t that fast or at least not as fast as Alessandro, Beau and Simone. I was a bit slower than them, but we managed to use the right strategy.”

Jürgen Frank (Team75 Bernhard by SimRC, GT4 class winner): “To be honest, we had some worries in the beginning. We thought there would be two strategies: one for an extra stint and full throttle the whole race, and the other strategy that we planned from the beginning was to save fuel all the time. When Puresims hit the gas after about half an hour and they got away, we thought they will pull through now and that we might be on the wrong strategy, but somehow we made it work. In the first stint we saved two laps and I think that was the key today.”

Corentin Guinez (CoRe SimRacing, TCR class winner): “MSI eSports was really fast today. They obviously had quite a lead in the first stint in terms of traffic and fuel saving. We than basically spent all day in catch-up and the key was to save plenty of fuel. It was quite nerve-racking but really nice to hold on.”

TFRLAB provides a Laptime Summary of each of the 24H SERIES ESPORTS powered by VCO races. If you want to have a closer look at the data from the races so far this season, check out their Summaries here: TFRLAB | Laptime Summaries