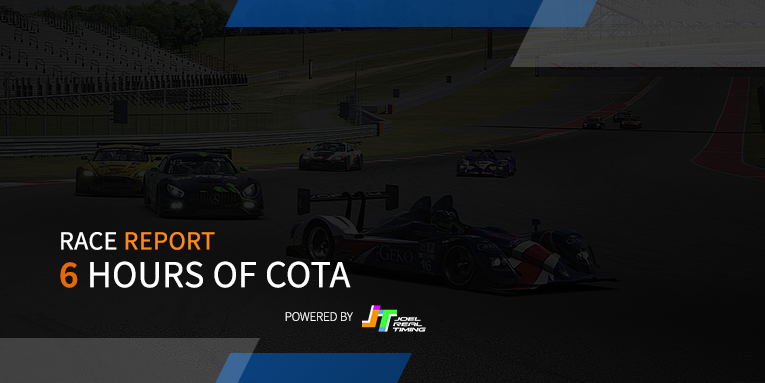 The champs are back on the top step

The NES 6 Hours of COTA powered by Joel Real Timing was the second round of the season. This time Coanda were on top in qualifying, followed by Pure Racing Team White and CoRe SimRacing. Team Chimera lined up fourth and Friction Simsport had a better showing in Texas, starting from fifth. Team Chimera made a big move to the inside through Turn 1, but couldn’t move up any places. The Top 5 stayed put throughout the first lap, and it was very clean up and down the field. Perhaps the surprise of the field was that Geko Vortex Simracing car down in ninth place, but was looking aggressive in the early minutes. The prototypes began their first tour through the GTS field as Coanda started to pull a gap to the field behind. That gap went from 1.5 seconds to 3 seconds as they passed the GTS cars, Martin Krönke slicing his way through the traffic as he does so well. As the pitstops began, the Friciton Simsport HPD closed right up to the back of Team Chimera, and Thrustmaster Mivano Racing closed up too. The pitstops opened these gaps up however. 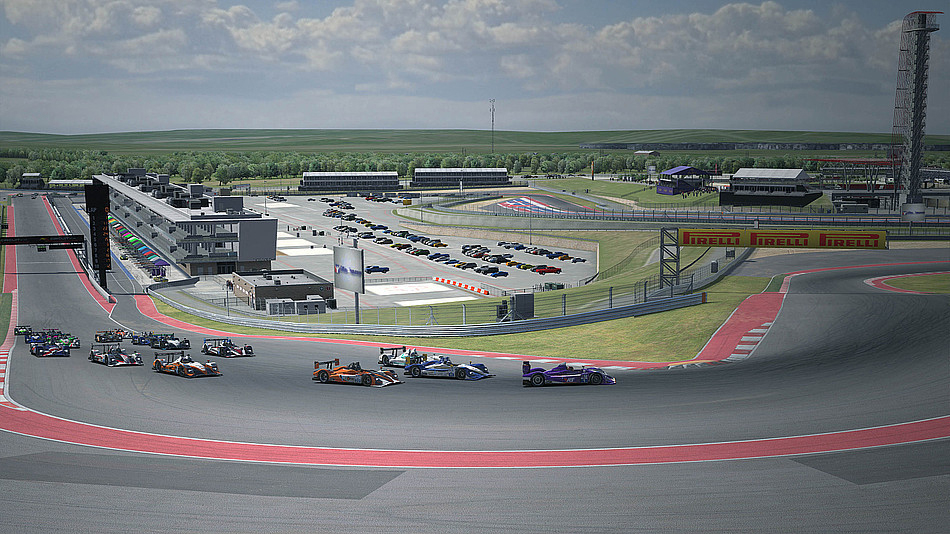 At the top of the hour Coanda had a comfortable gap of 4.7 seconds, and were looking good for victory. However, anything can happen in endurance sportscar racing. Bad luck struck the Pure Racing Team LMP White car as it got damage just before the second round of pitstops as he turned across the #61 Torque Freak Racing Aston Martin, promoting Team Chimera to third. Another hour had elapsed and it was still Coanda in the lead but this time by 14.2 seconds, another incredible display from the reigning champions.

While there weren’t many battles to speak of, two big guns, Friction Simsport and Radicals Online, were battling away just outside the Top 5. While PRT White were in 7th, PRT Black were trying to match them, but couldn’t find a way past MadCape #17 HPD for ninth. After earlier troubles, Pure Racing Team LMP White were off-sequence and now battling Core Simracing after the halfway stage. They have to make an extra pitstop however. With two and half hours to go, Coanda Simsport were still leading with Core Simracing second, Team Chimera third and surprisingly Thrustmaster Mivano Racing in fourth. Pure Racing Team White had recovered to sixth ahead of Friction in seventh. MadCape had more trouble bumping into Team Chimera GT1, giving them fender damage.

Before you knew it, pitstops emerged again. The only change in the top 5 however was that Friction SimSport got ahead of Radicals Online for fifth. Then, when Pure Racing Team LMP White came in, they had to pass Marcus Hamilton and did so successfully. He fought back however, making a pass into turn 1. Marcus then retained that position and pulled a six seconds gap over the next half an hour. Radicals Online got into a little trouble with the Thrustmaster Mivano Racing GTS Audi in Turn 9, but came away unscaved. After the penultimate pitstops, Pure Racing Team Black’s impressive drive got them up to 7th place, as Friction dropped back slightly. The final hour was upon us and the mark it Patrick Wolf passed the Radicals Online HPD for fifth place.

As the final pitstops took place not much changed, apart from the Coanda driver. Pietilä getting in to finish the race. Team Chimera had finally caught Core Simracing for second place, yet more battles in an already incredible race. Was there more drama to follow? Yes. Friction Racing, a lap down, ran into the back of Team Chimera, ruining any chance of a second place for the British squad. A deserved penalty was handed out by the stewards. Tommaso Carlà was on a charge and caught the Team Chimera car with under 30 minutes to go. Yet more position changing at the end of a NEO Endurance Series race. But he couldn’t get anything done in the end. But it was the reigning champions, Coanda Simsport, took the victory by 33 seconds to Core Simracing, Team Chimera and Thrustmaster Mivano Racing.

Pre-race there was a lot of discussion in the paddock about a Balance of Performance change made by the organisation. At Sebring it was very clear the Aston Martin had a too big of an advantage. After the race is was clear the organisation made the right call. 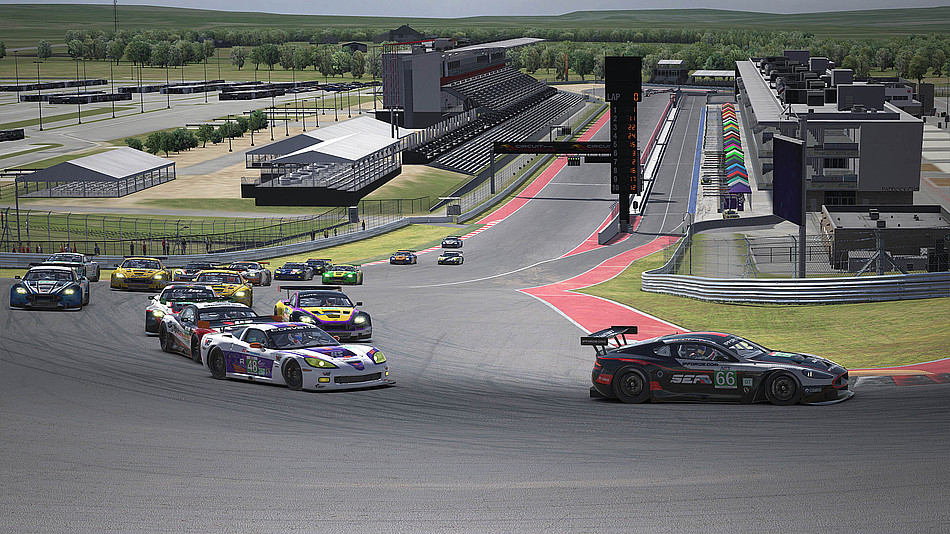 The first row looked like this after qualification: Torrent Motorsports secured the pole in front of Coanda Simsport. Radicals Online secured Mivano Racing the second start row and thus also a good starting position in the race. Only from the third row CORE Motorsports started, next to SimRC.de Crimson. However, the sister team and start-up winner SimRC.de Iris started off even further back, for which it was only 8th place after qualifying.

The start was more eventful than in the prototype field and there were some changes in position. CORE Motorsports was able to pass Thrustmaster Mivano Racing and Radicals Online, later in the stint, taking third place in the race. At the top, Torrent Motorsports were able to create a gap to Coanda Simsport, and they were slowly settling down from the rest of the field.

For SimRC.de Iris the first stint was pleasing and could win a total of three positions and found herself before the first pitstops in round 30 in fifth position. At the start of the second stint Radicals Online, however, made a mistake in turn 15 and lost two positions. SimRC.de Iris was therefore in fourth place, which seemed to be the maximum for that car. Meanwhile Radicals Online tried to make up for the lost ground. A nice battle developed, which lasted until halfway of the race. A chaotic pit stop cost Radicals lost valuable time. They rolled out at first – apparently completely cleared – but the car was a few meters off from its marks. The team had to push the car back to fill up the car. This pitstop cost the 37 team good half minute and lost sight on fourth place.

In the second half of the race the top 5 settled and Torrent Motorsport did not let anything burn down at the top. Just ten seconds saved from Coanda after six hours of racing to the finish line. Twenty important numbers were counted in the championship. CORE Motorsports finished third, taking their second podium of the season.

While qualifying at Sebring was very close, the Circuit of the Americas showed a completely different picture. With almost three tenths of a second, Thrustmaster Mivano Racing secured the pole before the winners of the first season. 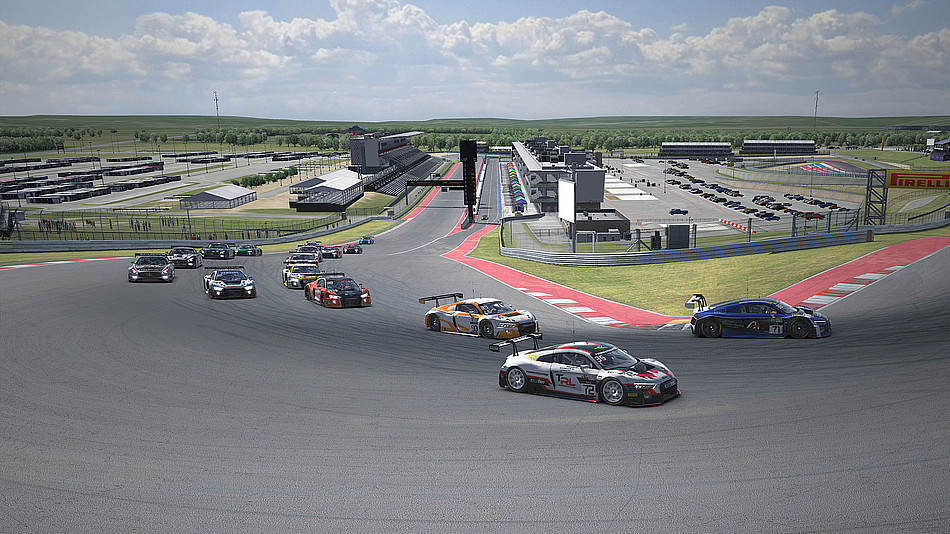 At the start PRT took an early lead, followed by Atomic Motorsport, Thrustmaster Mivano, and CoRe SimRacing. While the top was fast paced, it was turbulent in the midfield. Team DFTBA hit Audi from MSP Drivers-Home in the second hairpin and turned the # 85 off the track. The following vehicles had to avoid the accident and lost the connection to the top group early. The 82 squad received a 15 second stop and hold penalty for causing a collision.

With the beginning of the interaction traffic after about fifteen minutes, the GTS field got stretched out. There were a few on track battles and reading traffic was very important throughout the race. This was best achieved in the first two hours by the Pure Racing Team, which strengthened their lead on Atomic Motorsport and Thrustmaster Mivano. Behind them CoRe SimRacing and Shinya Michimi Simracing delivered a tight and probably the most handsome twist in the GTS class. For almost three hours, they could neither separate, despite the traffic and alternative pitstop strategies, and again and again they changed positions behind the settled top 3.

While some teams made their stints as long as possible and reached around 75-minute stint lengths, other teams were aiming for five stops early. After four race hours there were many position shifts, especially in the midfield, which gave the strategists some challenges. With one hour and a half to go, the pole sitter Thrustmaster Mivano passed Atomic Motorsport for second place. Shinya Michimi Simracing was able to steal CoRe SimRacing fourth place. CoRe SimRacing had some bad luck in the final hour and were involved in a couple of late race incidents, dropping them well outside the top 10. Pure Racing team was able to secure the already second race win of the season. The best Mercedes, from Team IRDK Endurance ended up on a strong and deserved fifth position in class.

Full results and championship standings are available on the website. The race is also available on demand in the NEO race archive.
The third round of the NEO Endurance Series takes place at Twin Ring Motegi on December 11th at 15:00 GMT. This race will be broadcasted by RacespotTV on iRacing Live.