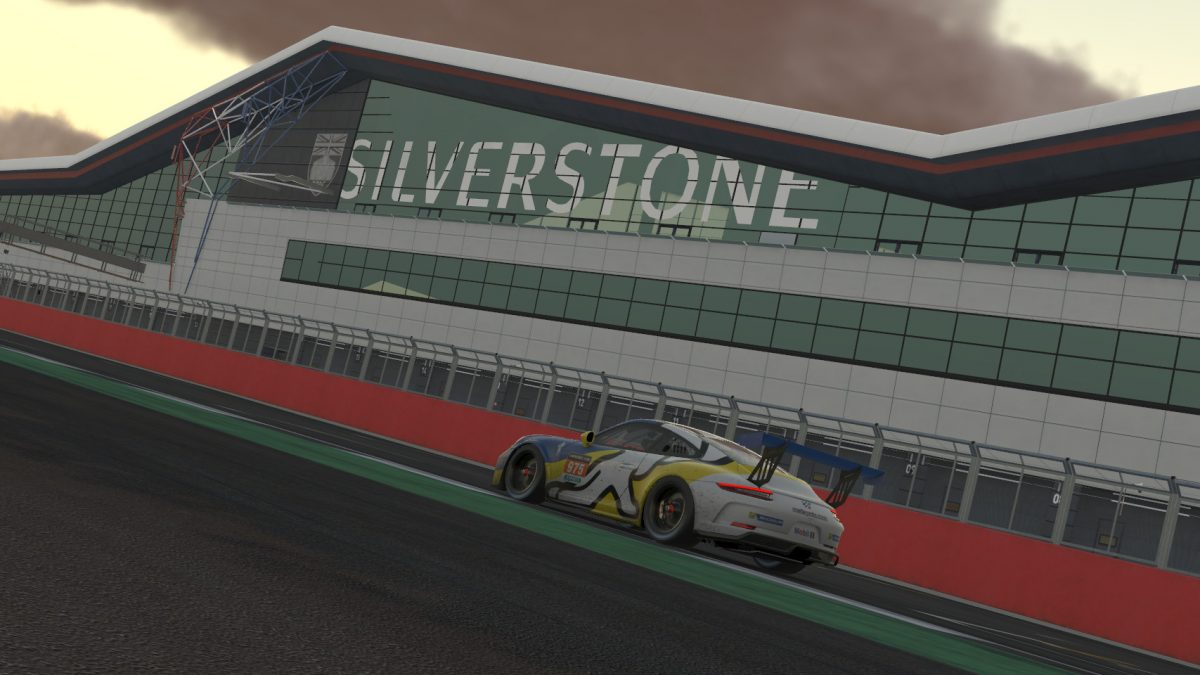 Given the utter dominance shown by MSI eSports in the 991 class so far this 24H SERIES ESPORTS season, it seemed like only a massive change could knock them off the top.

Right on cue came the biggest update to the Porsche 911 GT3 Cup car since its iRacing introduction as it received a tire model overhaul in the latest quarterly build.

With easy spins possible on cold tires and less than two weeks to prepare before last Sunday’s 6H SILVERSTONE, it seemed like just the sort of obstacle that could throw off even an experienced 991 team.

The start of the race did indeed see some contenders struggle to come to grips with their tires in the heat of battle, but it all played out well behind the polesitters from MSI, who showed complete control even with the challenge of rubber so far untested in a race setting.

In turn 1, a pair of incidents unfolded that splintered the 991s. From seventh on the grid, GOTeam Racing got sideways under braking but managed a slide through the grass and back onto the road, where Robin Östlund was able to resume without contact.

Just ahead of him, Álvaro Muñiz Mora from Williams JIM Esports Cup M drove in deep and tagged the rear bumper of IRDK Endurance’s Marcello Maio. That set off a synchronized spin that scattered the rest of the Porsches behind them.

The cold tire chaos wasn’t finished yet, either. While fighting for third place, Guillem Escuder in the other Williams JIM car, the #991, spun exiting turn four, sending their best qualifying result of the season up in smoke on the first lap.

As tires finally came up to temperature, the inevitable happened at the front of the field: MSI’s Marc Perez opened a three-second lead just ten laps into the race over Anders Dahl from Burst Esport.

Once GT3 traffic arrived, the gaps began to open up through much of the 991 field, although there were still teams rising and falling through the order as they got their first taste of tire management in a multi-class environment.

After a side-by-side battle and a bit of door-banging in Luffield, Jordan Weekes from Avid Chronic Racing claimed third place from Eero Tuominen of Inertia Sim Racing and pulled away by six seconds at the end of the first stint.

From thirteenth on the grid, Rafal Drzaszcz avoided the first-lap spins and moved Chartwell Racing inside the top five after just 12 laps. But Drzaszcz couldn’t seem to keep up the pace as the stint went on, and he dropped three spots in a four-lap span to DV1 TRITON Racing, Williams JIM’s #991 team, and F4H Racing, whose William Laster took to the runoff to avoid the early incidents but came through unscathed and in the team’s best position so far this season.

The second stint saw those same trends continue. Perez’ steady driving up front helped him extend the lead over Dahl to 25 seconds, and Weekes remained in third a further 12 seconds back.

The fourth-place battle turned into a three-way contest between teams each tackling the race a bit differently. TRITON’s Dawid Nowakowski continued his consistent drive through the field after starting eleventh, but he couldn’t match the pace of Escuder, motivated to make up for his first-lap solo spin.

The third player was Maio, who also looped it on lap one but was back inside the top five after a short-pitting strategy for IRDK Endurance. Their early pit stop to go off-sequence and avoid slower-class traffic was a hallmark of their P2 team’s performance last year, but it also seemed to work for them in the Porsche.

However, that strategy was compromised by a penalty for early contact with the Huber Racing E-Sports 991 car, and after serving it during the second round of pit stops, IRDK fell from the top five back to eleventh.

They weren’t the only Porsche team hit with a penalty on Sunday. Huber faced a stop-and-hold after contact with a TCR, and TNT Racing, F4H, and Inertia also drew the ire of officials after car-on-car contact of their own.

The podium positions were further thrown into disarray when Burst took a rare penalty for speeding entering pit road during their third stop of the race. As a result, the running order had a very different look with just 90 minutes to go.

While MSI’s lead was unassailable, Williams JIM’s #991 team found itself in second after Daniel Cruz continued their recovery, and Avid Chronic held onto third after a solid double stint from Norbert Leitner.

As Weekes closed in on Cruz, the second-place fight came to blows between them inside the final hour. A late dive into Becketts sent the #991 spinning and the #959 into the penalty box during their final pit stop.

That helped Dahl reclaim a top-three spot after falling as far as twelfth following Burst’s penalty, and he wasn’t finished yet. With ten laps to go, Cruz overdrove the entry to the esses and Dahl slipped through, running in second on the road to the checkered flag.

All that happened more than a lap behind the eventual winners. MSI’s stranglehold on the 991 class continued with Perez and Alejandro Sánchez putting in another unbeatable effort, unfettered even by the late tire update before the race.

While Burst crossed the line in second, the final results showed a different team on the second step of the podium. While Avid Chronic was prescribed a 10-second penalty, they were incorrectly held for 35 seconds. Once that time was given back, it elevated Weekes and Leitner to second place — the team’s best result and first podium of the season.

Burst dropped to third but still continued their streak of podiums in each race this season. Williams JIM was fourth and TRITON settled into a top-five position by mid-race, ultimately finishing in fifth.

Sixth place was decided in the final hour as Tuominen and Inertia drafted past Mora and Williams JIM’s #908 car on the Hangar Straight with 14 laps to go.

Eighth place also changed hands in the closing laps when Laster was barged off course by the damaged Altus GT3 car, letting Maio and IRDK Endurance sneak by to take the spot.

For GOTeam Racing, its most impressive moment of the day may have been its first-turn drift to avoid a spin on cold tires. After that, the #907 car held onto the back of the top ten and finished there in tenth.

Huber was on the giving and receiving end of contact at Silverstone, and their eleventh-place result is their worst of the season so far. For Chartwell, their short-run pace couldn’t hold up over the entire race, and they slipped to twelfth at the finish.

SRN Motorsports had a slippery start, taking to the runoff and eventually sliding through the gravel to avoid the lap-one spins ahead of them. Although they battled back to gain a few positions, including a continuation of their COTA fight with TNT, they could only manage a thirteenth-place result.

TNT was fourteenth and Gold Racing Team spent the weekend looking for speed on their new tires, starting and finishing in fifteenth.

All told, Silverstone was a struggle for a number of 991 teams. Whether it was the new tire learning curve, contact with opponents and other classes in some of the schedule’s tightest turns, or just trying to keep up with the runaway championship leaders, no teams besides MSI could claim to have a near-flawless run last Sunday.

In a race with all the ingredients to be a potential stumbling block for the Porsche powerhouse, it was instead the rest of the field stumbling over themselves while MSI drove to another dominant win.