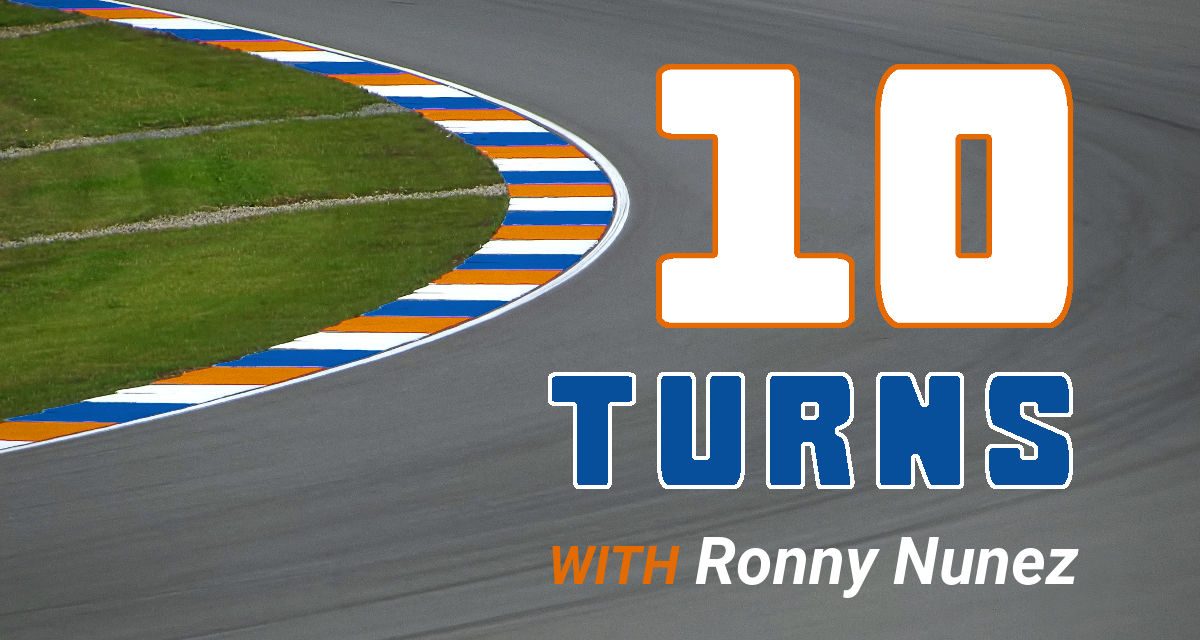 Welcome everyone to the final edition of 10 Turns for NEO season five. I’m joined today by Ronny Nunez, who was part of Torque Freak Racing’s P2 team that won the season finale at Le Mans and finished second in the class championship.

Corey Davis: Ronny, congratulations on a great season and thanks for joining me! Are you ready?

Ronny Nunez: Yeah, I’m ready and thanks for having me.

And when did you get started in iRacing?

Actually, I kind of tried iRacing back all the way 2009 but I was never serious about it. I was all about rFactor, then I went to Assetto Corsa. Then back in 2017, I really wanted to do serious endurance events and I didn’t like rFactor2, which was running a few decent ones. I tried to apply for a team, and that team was actually Torque Freak Racing, who I’m racing with now. So yeah, starting [on iRacing] in 2009, and for real starting in 2017.

Maybe that I’m usually really drunk in the day before a big race. That wouldn’t surprise some of my teammates, but it really cost us a good position in the first round this season in NEO at Sebring. I wasn’t in any condition to do that race.

So does that mean in the free practice sessions on Saturday, you might not want to be in the car?

Yeah. that was so hard to do. It’s like a running joke in the team that I’m too drunk. It’s not something that I might do again, but you never know.

I would think before I’d call it aggressive — and I know most of my teammates would say so — but I think I’ve picked up some speed this past year, and it’s just trying to be as smooth as I can. I’m not really the most patient driver but I try to be clean and fair to other drivers as much as I can. Slight oversteer above all on the setups, and I think that’s it.

Do you think the HPD suits your style pretty well, or did you have to adjust at all to it?

Yeah, I think it’s by far my favorite car to drive in the service. I really like the downforce levels. I would be driving a P1 if I wouldn’t be so slow with them. I’ve just got to figure out the whole hybrid system, got to focus with it. And my driving style, I do a lot of throttle braking, so it’s really hard to regenerate driving like that in the P1s.

It would have to be [Juan Pablo] Montoya, which happens to be my favorite driver. It was his third race, at Interlagos, and he made this unbelievable pass on Michael Schumacher back in 2001. That’s pretty much in my memory.

I would say if you’re looking for an aggressive driver to model your style after, Montoya’s probably one of the best.

I really think so. You know, I know what kind of driver Montoya is. I’m not going to say he’s one of the elite drivers because he’s not, but he’s so exciting to watch and he can be really fast on his day.

Just anything at Bathurst or Le Mans, really. Those are pretty much my tracks. I can be away from the sim for a long time and just get right back into the pace in those tracks. I really love them.

You guys seemed like you just had the race in control at Le Mans. Is there just something about that track or the setup or you guys as a team that worked so well there?

I think it’s a mixture of all three. We as a team tend to punch above our weight in really long races, like 24-hour races, especially because we try to prepare ourselves as much as we can and we try to be really safe. Those are really long races, after all. You don’t want to throw it away in the first few hours.

You’re not the first person who has said this season that you haven’t eaten a lot during the races. Do you think your teammates are that way as well? Are you guys all starving by the end of a long race?

I think if we do good in the race, I think it’s an awesome reward to have some pizza afterward. Even if we have a poor result, as a consolation prize. I mean, I just love food!

7. What is the biggest change you expect to see in the world of sim racing over the next five years?

The level of competition is going to be crazy. I mean, it already is. You can even see it reflected in the iRatings, right? Because they’ve been inflating. The people I used to race against when I was 3k, now most of them are 5k or 6k. Not only that, all these big companies and real-life teams are getting involved. It’s going to be huge, but it’s going to be so hard to be competitive for sure.

I don’t know, maybe our main opposition this season in P2, which was Pascal Stix. I mean, obviously Sven [Neumann] was so fast, but Pascal was so fast and so consistent, it was so hard to match his pace throughout the whole season. I have a lot of admiration for him, and so do my teammates. I think it would be him.

You guys ran so close with the AVA guys. Did you figure out what their speed secrets were, like where they were gaining any time on you?

9. In the last interview, I talked with Joris Thielen. You sort of answered this already, but he was wanted to if your team was planning to move up to the P1 class for next season.

Like I said before, I would love to but I don’t think it’s going to happen. I’m too slow with those cars. I would really love to be faster in them, but it’s just out of my abilities.

10. Like I said, this is the last interview for this season. When we start these back next season, do you have a question I can ask the next person?

Yes, I would like to ask what’s their favorite track, but the most important thing is what makes them fast at that track. Is it the lines they take? The way they set up the car? Do they go really aggressive over some bumps or something? What makes them fast?

That’s a very good question and I’m excited to hear the answer. Ronny, thanks again for joining us. I hope you enjoyed this!

Very much, man. I really thank you for having me, Corey. It’s really entertaining reading all of your articles. All of us in our team really look forward to reading all of them.

That’s great to hear. I enjoy working on it, and I’m so glad that you and the rest of the NEO field and all the fans are able to listen to and read these interviews all season.

I hope you all stay tuned for the off-season content we have coming on neo-endurance.com at @NEOendurance on Twitter. I hope everyone enjoys the summer. We’ll see you back for season six!