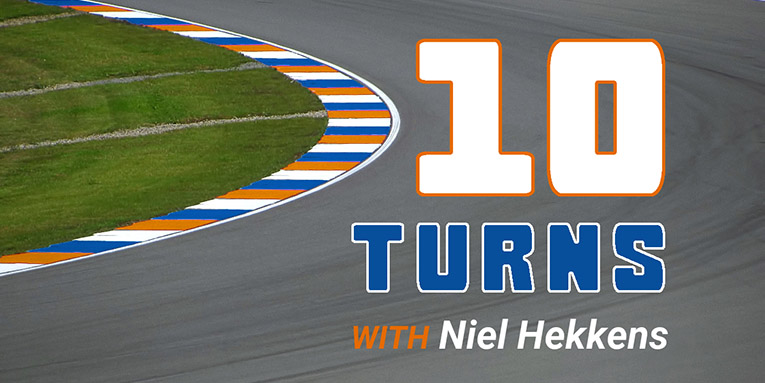 Welcome to 10 Turns. This is a new interview series we’re debuting this season here on neo-endurance.com. It’s inspired by a similar series that an American motorsport writer named Jeff Gluck does, where he’ll ask 12 questions to different real-world racing drivers every week. It seems like a pretty good way to highlight more about a driver than just what you see on the track.

You can listen to this interview using the player below or keep reading for a full transcript.

Corey Davis: In this first edition, I’m joined by Niel Hekkens, the co-founder and director of the NEO Endurance Series. Niel is from the Netherlands. He has also been a NEO driver in the past with the Racing Lions team, and I think he still does some occasional official racing between his duties as the head guy for NEO and also taking care of his newborn son. So Niel, you’re a very busy man!

Niel Hekkens: Yeah indeed, especially having a baby, in the beginning, it takes way more time than you might think.

Corey: I am sure it does, so thanks for agreeing to be our first interview here. I should add that Niel has not seen any of these questions yet so this may be the toughest interview all year! So Niel, are you ready to go?

Corey: Alright, let’s get started with the 10 Turns.

I think that would be somewhere at the end of the ‘90s, I’m not sure exactly which year, but it was Grand Prix 2 by MicroProse. I played it on the computer. My cousins introduced me to that game, and I’ve been hooked and on sim racing ever since.

Excellent. And did you have a racing wheel and setup then, or was it just on a joystick or a keyboard and mouse?

Back then, it was keyboard. I think the Grand Prix games were basically the only titles that supported the keyboard very well. My first wheel was in Grand Prix 4, so that would be early 2000s, I guess.

2. What’s a fact about yourself that your teammates or maybe your fellow race control officials would be surprised to know?

Is that about anything or just sim racing-related?

Yep, it could be about anything.

That’s a very good question. I think a fact that not many people might know is I had been talking with the people from Creventic who are organizing the 24H Series with among others, their 24 Hours of Dubai.

I had been working very closely with them and we got started talking about maybe doing events for them. Maybe even a season. But unfortunately, it got stalled at some point because in iRacing, we don’t have a lot of tracks they go to. For example, they go to Dubai, Mugello, Brno, and other tracks that are not available in iRacing. So it wasn’t that much interest, unfortunately. But who knows in the future.

3. I know you haven’t done as much driving lately, but how would you describe your driving style?

Nowadays I don’t like Formula 1 anymore because of various reasons, but I think one of the biggest moments that always stood by me was in 1998. I was eight years old, woke up early — as a kid, you usually do — and turned on the TV and it was just right at the start of the ‘98 Suzuka Formula 1 race. That was the race when Hakkinen became world champion. I think that’s one of my favorite racing moments.

5. If you could design a race using any of the content and features on iRacing, what you would pick that would give you the best chance of winning?

Give me the best chance? Let’s see, I would say, of course, if you would want to increase your chances of winning you would be in a super-fast car and everyone else in a Mazda. But I think I would say in the V8 Supercar. Not that I’m super fast, but I really enjoy that car and we drove that car a couple of times with the Gathering of Tweakers community, and I was always quite up there in that car. And I think any track would be awesome with the V8 Supercar.

I think it’s very unfortunate that outside Australia, this car is very unpopular because it’s very difficult, but it’s so much fun to drive that car.

It definitely is. And I’ll say I didn’t expect anyone would say they’d put themself in a faster class to answer this question!

6. I think I already know the answer to this, but what is your go-to meal on the day of an endurance race?

That would be a pizza. Ever since the start of NEO Endurance, somehow it became tradition to have a pizza while we’d be doing race control. So that would be my go-to meal.

That’s what I thought. Do you have the same toppings every time, or do you change it up?

I change it up. Sometimes I get a pizza from the supermarket that I throw in the oven. Sometimes I order one. But I think one of my favorite toppings would be BBQ chicken.

7. What’s the biggest change that you expect to see in the world of sim racing over the next five years?

I think that would be the way the sim racing scene would evolve as an eSport and also more physics-based changes would be possible, of course, due to the more powerful computers every couple of years. Day/night transitions for iRacing will be a massive, massive change for everyone both on ovals and, of course, endurance races, and I think also it forces people to change their way in setting up the car and approaching the race.

8. Who is one current driver in NEO that’s never been your teammate, but that you’d like to run an endurance race with?

That would be the co-founder, Egil Sandfeld. We actually started NEO by competing against each other during a World Tour event. I’ve never raced with him but it would be fun to do it one time.

9. In every interview this season, I plan to ask each participant for a question the next person. Since you’re the first interview, instead I just thought of a question for you. Again, I’ll ask you to take off your official’s hat and put on your driver’s hat. Back before we got the modern GTE cars, we had the old Ford GT2, and I think both of us drove it for at least one season. So again, thinking purely as a driver, what are your true feelings about the old Ford GT?

You had to think upside-down in terms of setup and it didn’t make a lot of sense, setting up the car. If you would follow the “normal” rules for setting up a car, it felt okay, but it was very slow. You had to really exploit the physics of that car to be very fast. I think overall, in the end, we enjoyed the car once we got around it like in the second half of the season.

I think that was my problem. Every time I tried a setup adjustment, the car did the opposite of what I expected.

Yeah, exactly. It was very confusing and by just looking at the others, we already learned a lot about the car.

10. The final question is, do you have a question I can ask the next person?

Let’s think. My question would be, do you race ovals? If yes, what do you race? If not, why not?

Okay, great. Well, Niel, that was 10 Turns. That went by pretty quick! Thanks again for joining us.

Everyone stay tuned in the next couple weeks here on neo-endurance.com for the next edition of 10 Turns. In the time being, make sure to check out the website and also @NEOendurance on Twitter for all the updates throughout the Sebring race weekend. The fifth season of the NEO Endurance Series gets started soon, and we’re all really excited about it!